On October 9, 2019, the Centers for Medicare & Medicaid Services (CMS) and the Office of the Inspector General of the Department of Health & Human Services (OIG) released their proposed rules to modernize the Physician Self-Referral Law1 (CMS NPRM), as well as the Anti-Kickback Statute2 and the Civil Monetary Penalties Law3 regulations (OIG NPRM). Both agencies’ NPRMs focus on creating flexibility for Medicare providers and suppliers to enter into value-based arrangements. The CMS and OIG NRPMs attempt to clarify how these long-standing anti-fraud regulations can be reformed to effect necessary shifts to a more efficient and patient-centered health care system.

These NPRMs are a culmination of the agencies’ considerations of comments submitted by health care stakeholders in response to two Requests for Information issued by CMS and OIG in 2018 as part of the Regulatory Sprint to Coordinated Care spearheaded by HHS Deputy Secretary Eric Hargan. Comments will be due to the agencies 75 days after each of the NPRMs are published in the Federal Register on October 17, 2019, which is December 31, 2019.

There are a significant number of proposals that the healthcare industry should applaud. For example, there are new exceptions and safe harbors to protect value based arrangements. Under the proposals, those entities who are willing to operate under “substantial” or “full” financial risk will also benefit from stronger protections under both the Physician Self-Referral Law (also known as the “Stark Law”) and the Anti-Kickback Statute. Importantly, with respect to value-based arrangements where the parties undertake full financial risk, CMS is specifically seeking comments as to whether “a value-based enterprise should be considered to be at full financial risk if it is responsible for the cost of only a defined set of patient care services for a target patient population,” and whether CMS “should require a minimum period of time during which the value-based enterprise is at full financial risk (for example, 1 year).” Additionally, as requested by many commenters, CMS has proposed revisions to the terms “fair market value,” “volume and value of referrals,” and” commercial reasonableness.” We encourage providers to review the changes to these definitions carefully as they are complex and do not entirely solve problems created by recent False Claims Act decisions, e.g., U.S. ex rel Bookwalter v. UPMC, 2019 WL 4437732 (3d Cir. Sept. 17, 2019).

While there are a number of changes that are encouraging, all hopes for reform did not materialize. Under the Anti-Kickback Statute-related proposals, for instance, drug and device manufacturers or distributors, laboratories, and DME suppliers, could not enjoy the protection of the proposed value based arrangement safe harbors. The OIG signaled a willingness to revisit this decision, but because of its fraud and abuse concerns with these specific stakeholders, the agency is wary of extending the proposed safe harbor’s protection to all of the aforementioned entities. Further, CMS did not address hot-button issues under the Stark regulations such as the limits on physician-owned hospitals and the in-office ancillary services exception.

Each of these NPRMs are complex and there are many intended and unintended consequences of these proposed revisions. We will provide additional analysis in the weeks ahead regarding specific industry impacts of these regulatory changes. In the meantime, we provide a high-level summary of some of the most important proposals below.

The CMS NRPM includes, in part, the following notable proposed modifications to the Stark Law regulations: 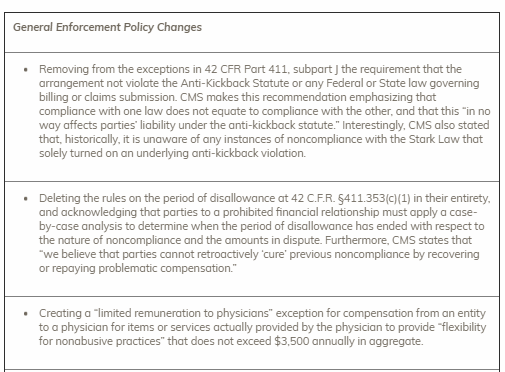 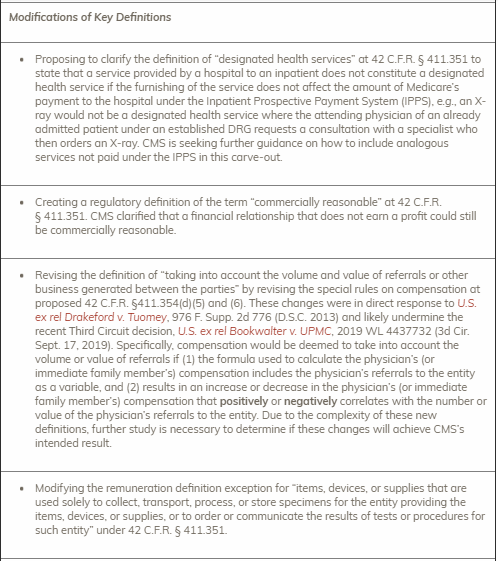 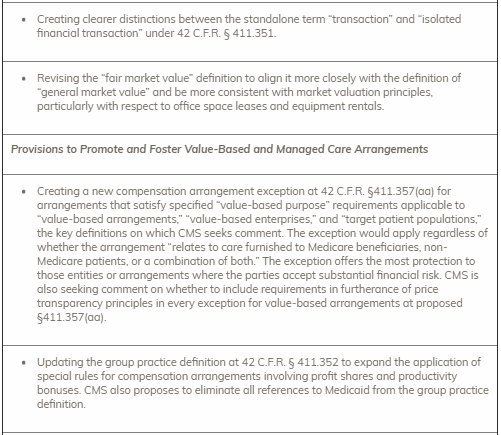 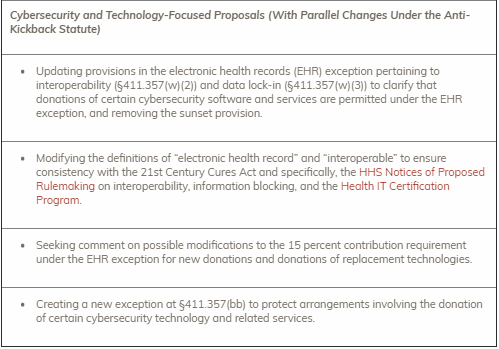 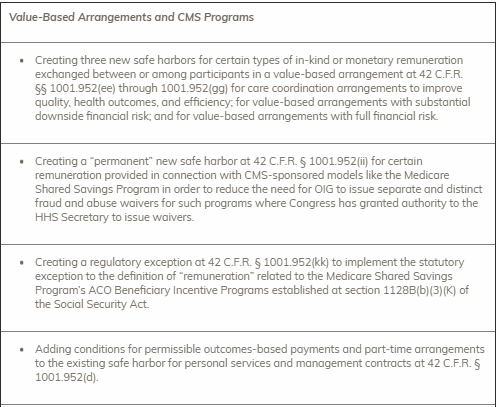 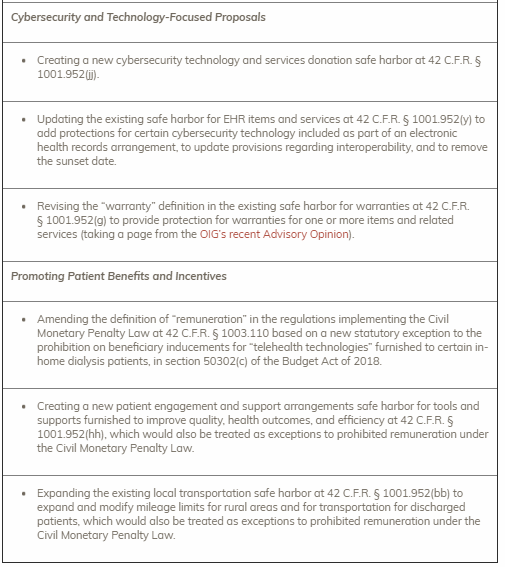