Our 2019 Foreign Bank Tracker, the fourth in our series, draws on 10 years of Australian Prudential Regulation Authority (APRA) statistics to reveal capital flow trends into Australia via foreign banks.

Following more than two decades of sustained economic growth, Australia remains an attractive investment destination for many global companies looking to diversify their investment portfolios. Our regular activity with both emerging and developed economies and engagement in forums such as the Asia-Pacific Economic Cooperation (APEC) and the Association of Southeast Asian Nations (ASEAN), opens many opportunities for trade and investment, backed by robust and well-established legal and regulatory regimes.

Sitting in a time zone that spans the close of the US markets and opening of European markets, Sydney has become an important link for global banking operations. Today, there are just over 50 foreign banks operating in Australia, 28 of which come from Asia. In recent years, Asian banks have recorded the strongest growth in Australia, driven largely by a multitude of new bank entrants arriving from India, Korea and Greater China, keen to establish their footprint in Australia.

Overall, foreign banks operating in Australia have recorded three years of consecutive growth. In 2017 and 2018, foreign banks recorded a stronger rate of growth in total resident assets than those of the big four Australian banks (though off a substantially lower basis). 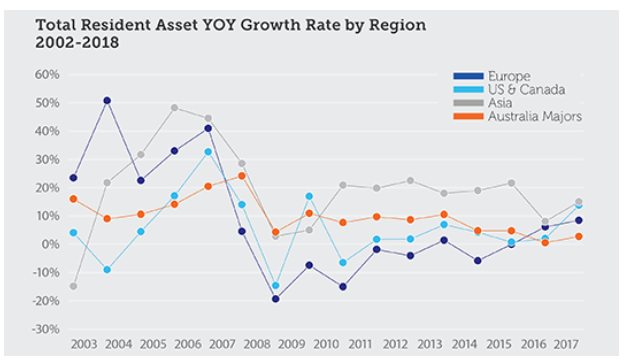 *Individual banks may grow faster or slower than the groups they are members of.

Our report continues to reveal interesting patterns of capital investing into Australia. With 2019 shaping up as another busy year for foreign bank investment, we look forward to supporting the evolution of capital investment into the Australian market and working with our clients to continue to deliver globally-leading outcomes.

Foreign bank activity tells a compelling story about capital flow into Australia, and is indicative of the continued overseas interest in investing in Australia. Overall, signs are positive, and we expect to see the opportunities in a wide range of industries continue to increase in the coming year.

The next twelve months are set to be interesting. Asian banks continue to increase in size and numbers, United States and Canadian banks are growing almost as much, and with Brexit on the horizon, European investment is set to change dramatically.

In addition, the regulatory landscape is changing for banks in Australia, and the next twelve months will illustrate how the Royal Commission into Misconduct in the Banking, Superannuation and Financial Services Industry has impacted the industry long term.

It's an interesting time for banks and investors that, with the right information and a focus on the unique aspects of each region, is full of opportunity.