The U.S. Environmental Protection Agency (EPA) issued on June 20, 2018, guidance intended “to improve transparency with the public and with companies seeking Agency review of their new chemical substances under the Toxic Substances Control Act (TSCA).” EPA states that the guidance, entitled Points to Consider When Preparing TSCA New Chemical Notifications (Points to Consider Guidance), “promotes early engagement and communication, and enhances overall understanding of EPA’s technical review and analysis to better move chemicals through the evaluation process.” EPA incorporated comments from a December 2017 public meeting and feedback received on a November 2017 draft of the document in the final guidance. EPA published a Response to Comments Received on Points to Consider Posted for Comment November 2017 (Response to Comments). EPA states that it expects that use of the guidance will result in “more robust submissions.” EPA encourages companies to contact its new chemicals program to set up a pre-submission (or pre-notice) meeting before submitting their premanufacture notices (PMN). According to EPA, the pre-submission meeting is an opportunity to discuss the planned new chemical submission and to understand EPA’s approach to reviewing new chemicals for potential risks early in the process.

TSCA requires anyone who plans to manufacture (including import) a new chemical substance to provide EPA with a PMN before initiating the activity. EPA states that the guidance provides the general public, especially new chemical submitters, with important information on:

The guidance lists the following possible determinations that EPA will reach under TSCA Section 5(a)(3):

According to EPA, if submitters fail to submit the required information when they complete and file their notifications, EPA may declare the notice to be incomplete and the review period will not begin. EPA states that if sufficiently specific information is lacking, it “typically makes conservative assumptions, which oftentimes lead to the practice of delayed reviews and frequent suspensions while submitters work with the Agency to provide and/or develop additional information.” The guidance is intended to reduce the frequency of such delays.

The guidance identifies two basic scenarios that often lead to delays in reviewing notifications in the New Chemical Review process:

The information provided in the guidance provides an overview of the New Chemical Review process and how EPA evaluates notifications. The guidance begins with a description of the information required to be submitted to EPA electronically via the Internet using EPA’s Central Data Exchange (CDX)) on EPA Form 7710-25 (Rev. 6-09) (see EPA’s Sample Premanufacture Notification (PMN) Form web page). It then describes each step of the New Chemical Review process, as shown in the following diagram, and provides recommendations on types of information and/or specificity of information that will facilitate a more refined evaluation of new chemical substances. 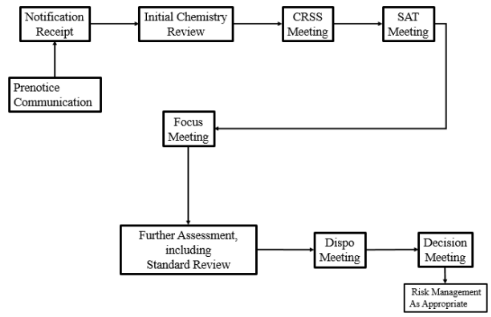 EPA published a Federal Register notice describing its request for processing the information collection request amendment for TSCA Section 5 information on an emergency basis. EPA states that the notice is necessary to make the guidance consistent with the requirements of the Paperwork Reduction Act. Although the notice was published June 14, 2018, EPA requested that the Office of Management and Budget approve the emergency processing request on or before June 11, 2018.

We appreciate EPA’s issuance of its revised Points to Consider Guidance. The new version largely tracks the previous draft in many sections, but includes important clarifications and changes in some other sections. One that we noted was the section dealing with Aquatic (Environmental) Hazard/Toxicity (page 19 of new version) where we found notable changes including the following:

EPA clarified that in “difficult to test substances” cases, submitters should consider using a pre-notice communication with EPA to explore the issue prior to initiating testing. The previous version had jumped directly to submitting protocols to EPA while the changes reflect recognition by EPA that the issues can be complex, and early discussion is needed even before protocol development.

The discussion of the Chemistry Review and Search Strategy (CRSS) meeting includes a new NOTE discussing the “special flags” used on the TSCA Inventory to convey important regulatory information. While helpful, we regret that EPA declined to provide in the Points to Consider Guidance additional explanation of the legal effect and purpose of the polymer exemption flag (a new “special flag”) that EPA has used for certain polymers considered under the new law. Other inventory flags, such as the “S” flag that indicates the substance is the subject of a significant new use rule (SNUR) or the “T” flag indicating a test rule that includes the substance, are informational in that they provide information to the potential manufacturer that the manufacturer may have additional obligations (e.g., under a SNUR or test rule). The new polymer exemption flag, however, is not informational. The polymer exemption flag seems to create a boundary around what may be manufactured under that particular substance identity. While we applaud this creative approach, we urge EPA to provide its legal interpretation of the effect of Inventory flags in general and the polymer exemption flag in particular.

One of the challenges that is not addressed in the Points to Consider Guidance is how the detailed information that the document calls for will affect the outcome of the PMN review. Given EPA’s recent pattern of decisions, providing extensive detailed information will, at best, change an up-front ban-pending-testing to a “may present” or a non-order SNUR determination -- that is, additional information only changes what is intended, not conditions of use that EPA foresees. Generally, EPA’s views on what is “reasonably foreseeable” are unaffected by information submitted with a PMN; in nearly all cases in which EPA has identified a hazard other than low for health and low for aquatic toxicity, EPA has imposed or is in the process of imposing regulations to protect against what EPA identifies as foreseeable uses. EPA has been open to additional information that might limit what is foreseeable, but seems to expect the submitter to prove that a particular condition of use will never occur. Proving a negative strikes us as an impossible burden, and one that strains the definition of what is “reasonable” and “likely.” We recognize that such consideration may be better addressed in other EPA guidance documents (for example, its Framework Document). In that the Points to Consider Guidance recommends that submitters undertake significant effort in gathering and including information, EPA may wish to acknowledge that despite the inclusion of such information with a notification, it may not significantly influence the PMN determination.

The revised final Points to Consider Guidance and EPA’s Response to Comments do not meaningfully respond to or address a number of the comments made by the TSCA New Chemicals Coalition (NCC) regarding human health hazard/toxicity. These documents included comments requesting more discussion on the issues associated with potentially respirable substances and additional discussion of absorption, relevant or anticipated routes of exposure, and metabolic potential for the new chemical. We found that other comments offered on the document posed interesting and important scientific issues which EPA did not consider or discuss because, e.g., the “document is meant to be a brief overview of the New Chemicals review process” and it “is not meant to replace nor update the more detailed EPA guidance” (page 15 of Response to Comments). We hope that EPA will recognize the need to provide greater clarity and understanding on scientific issues and will choose to do so in its development of the New Chemicals Decision Guidelines Manual. Alternatively, or in addition, the issues identified would serve as an excellent starting point for a series of discussions by the Science Advisory Committee on Chemicals (SACC). It may also be possible for EPA to provide additional clarity on issues that are specific to a chemical category in its New Chemical Categories document, but EPA acknowledges in its Response to Comments that updating the New Chemical Categories has not been a priority. We acknowledge that the Points to Consider Guidance may not be the appropriate vehicle, but additional insight into EPA’s thinking on categories is urgently needed.