Scams, whether initiated online or over the phone, affect people of all ages. However, to the surprise of some, the Federal Trade Commission (FTC) has found that individuals in the millennial generation, which the FTC defined as people between 20 and 39, are 25 percent more likely to report losing money to fraud from electronic scams.

In its report, the FTC analyzed the reporting rates of fraud from September 2017 to August 2019, including the following types: 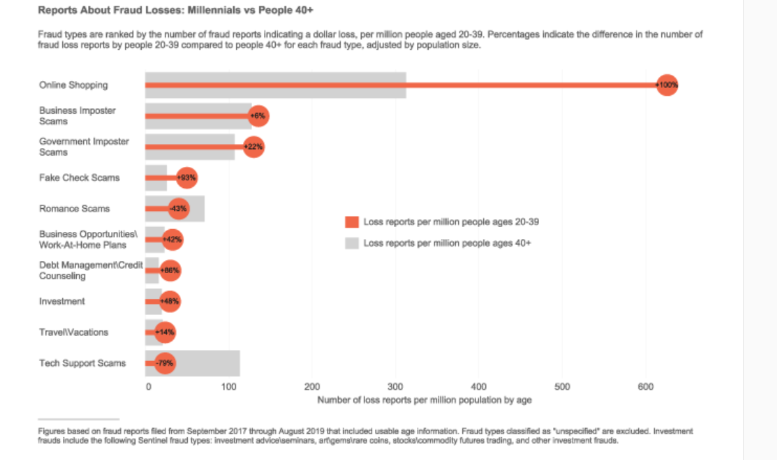 The FTC also looked at the amount people lose in connection with these scams. For millennials, the median loss reported was about $400. However, for those 40 and above, the amount was notably higher, breaking down as follows: $500 for people 40 to 59, $640 for people 60 to 79, and $1,700 for people 80 and older. Notwithstanding the disparity in the median loss per scam, the FTC reports that the individual losses sustained by millennials still added up to nearly $450 million over the course of only two years, of which $71 million was related to online shopping scams.

The disparity between the age groups noted by the FTC, and the medium by which such losses occurred, is consistent with other recent studies assessing the manner in which these types of scams occur. For example, in another recent study conducted in tandem by the Better Business Bureau, the Financial Industry Regulatory Authority and the Stanford Center on Longevity (and reported by The Wall Street Journal), it was found that the majority of consumers that fell prey to scammers (i.e., millennials, per the FTC) did so on legitimate websites and social media.

Anyone is susceptible to being defrauded by electronic scams. People should always remain cautious when they are contacted by others demanding money, and heed the FTC’s tips to avoid being scammed. Specifically, no matter the manner in which the purported scam is initiated, if someone has contacted you to demand money or personal information, be sure to review the request and discuss with someone you trust. For online shopping, know who you are dealing with, know what you are buying, know what it will cost, and review the terms of the deal. For debt-related fraud, know your rights under the Fair Debt Collection Practices Act to be able to recognize debt-related scams and frauds.