Trade Agreements Act compliance changed fundamentally three years ago. Or, so we thought on December 7, 2016, when the U.S. Court of International Trade (“CIT”), the appellate body for country of origin determinations issued by the U.S. Customs and Border Patrol (“CBP”), for the first time analyzed the meaning of “substantial transformation” under the Trade Agreements Act.(“TAA”).[i] To celebrate this third anniversary, we reviewed the CBP decisions issued over the last three years: (1) to see if we were correct, (2) to determine exactly how the CIT decision fundamentally changed the substantial transformation analysis, and (3) to figure out how companies can best comply with the TAA after this landmark decision.

Where We Started: Energizer

In Energizer Battery, Inc. v. United States,[ii] plaintiff appealed a CBP decision finding a military flashlight to be of Chinese origin under the TAA. In so holding, CBP followed its longstanding “essential character” substantial transformation analytical framework. CBP determined the flashlight’s Chinese LED gave the end product its “essential character,” and, combined with the fact that the assembly process in the United States was not overly complex, the CBP held the flashlight end product was not substantially transformed in the United States.[iii]

Embracing this first opportunity to opine on the meaning of substantial transformation, on appeal, the CIT decision noted the vast CBP precedent on point, but ultimately granted those decisions little-to-no weight. In determining the meaning of substantial transformation, the CIT heavily relied on the language of the TAA and implementing regulations, which require “a new and different article of commerce with a name, character, or use distinct from that of the article or articles from which it was transformed.” In doing so, the CIT minimized the importance of the “essential character” test relied upon by CBP, noting it “is not an established factor in the substantial transformation analysis,” while nonetheless remaining open to the idea that the country of origin for a component that is the “essence” of an end product could be dispositive in a country of origin determination. The CIT also left the door open for use of additional “subsidiary factors” in this analysis, though provided little guidance on how such factors should impact future CBP decisions.

Ultimately, in affirming China as the country of origin for the Energizer flashlight, the CIT relied on three main considerations:

First, the flashlight did not undergo a change in name, character, or use as a result of the post importation processing in the United States. Clearly the most important part of the court’s analysis, the CIT reasoned all the imported components retained their individual names and material composition or shape as a result of the post-importation assembly process. Further, with regards to use, the CIT noted “when the end-use was pre-determined at the time of importation, courts have generally not found a change in use.” This analytical framework was a conceptual departure from prior CBP precedent, which historically had analyzed whether the final end-product – not the individual components – underwent a change in name, character, or use.

Second, while explicitly noting this was of secondary consideration, the CIT held the assembly process in the United States was not sufficiently complex or meaningful to constitute a substantial transformation because the assembly primarily consisted of fastening the imported components together through a process that took between seven and twelve minutes. Put simply, the manufacturing process in the United States simply was not “substantial” enough to contribute to a “substantial transformation.”

Third, the CIT concluded a product consisting of approximately 50 different components (all but 2 of which were Chinese origin) was a product of China when the U.S.-based assembly and integration process did not result in a substantial transformation. Interestingly, while the CIT in Energizer spent a significant amount of time on the “substantial transformation” analysis, the court spent very little time in comparison on the actual country of origin analysis, ultimately concluding the number of Chinse origin components necessitated China as the country of origin without meaningful analysis.

Even though the CIT maintained every analysis is fact specific and needs to be determined on an individual basis, and did not outright prohibit the use of other “subsidiary factors” historically used by CBP, the CIT’s Energizer opinion appeared to set a higher bar for substantial transformation, meaning companies would seem to be required to do more in the U.S. than was previously the case before 2016 for TAA compliance.

Where We Are Today: Post-Energizer Analysis by the Numbers

While it is true substantial transformation appears to be more of an uphill battle than ever before, CBP still is relying heavily upon those “subsidiary factors” that were disfavored in Energizer.

Of the 53 publicly available CBP opinions we identified since December 2016 that rely, at least in part, on the CIT’s decision in Energizer, only sixteen ultimately determined the country of origin for the end product in question was the United States or a Designated Country (i.e., in roughly 70% of decisions CBP held the product in question was not TAA compliant.). 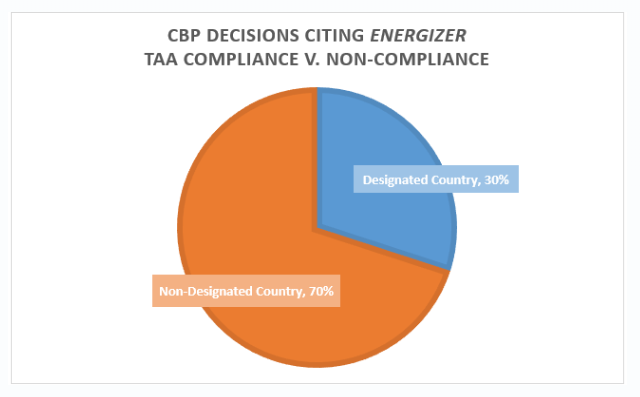 As can be seen from these statistics, but perhaps even more notably, these CBP decisions identified a vital flaw in the Energizer opinion. That is, while the CIT in Energizer provided detailed analysis on the “substantial transformation” and “name, character, and use” tests, the CIT failed to provide CBP any guidance on what to do when they find the end product was not substantially transformed in any one country. In such situations, CBP is still required to make a country of origin determination. It is in this vein that CBP has continued to rely on a “totality of circumstances” analysis, utilizing the very “subsidiary factors” that were generally disfavored, though not strictly prohibited, in the Energizer opinion.[vi] 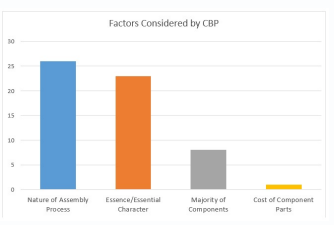 What Does This All Mean?

In sum, the CIT’s decision in Energizer clearly has impacted how CBP analyzes substantial transformation under the TAA. Interestingly, although the CIT’s decision fundamentally altered this analysis, the lack of clear guidance as to how to determine the country of origin when an end product was not substantially transformed in any one country frequently has left CBP to its own devices. In that vacuum, the vast majority of CBP decisions have focused on analysis of the “subsidiary factors,” sticking to a “totality of circumstances” approach frequently utilized pre-Energizer. Thus, while, not surprisingly, the substantial transformation test post-Energizer has created a higher bar, the fact remains that most CBP decisions primarily are sticking to what they know.

Manufacturers would be wise to reevaluate their internal TAA substantial transformation analyses and their TAA countries of origin to ensure that the TAA analyses consider whether imported components retain their individual names and material composition or shape as a result of the post-importation assembly process. If not, these substantial transformation analyses should focus on the factors CBP’s post-Energizer decisions show they value most: (1) whether the post-importation assembly process is complex enough, (2) the country of origin of the components that give the end product its essence, and (3) the country of origin of the majority of component parts.

This post first appeared in the Government Contracts Blog.