The Australian Government released an exposure draft for the first phase of its integrity package targeted at stapled structures on 17 May 2018 (Exposure Draft) following the announcement of the package on 27 March 2018 (Announcement). Gilbert + Tobin provided an early analysis of what was then limited details of the package in the Announcement.

The Exposure Draft, on the other hand, shows a measured and surgical targeting of transactions between a managed investment trust or attribution managed investment trust (collectively, MIT) and a corporate entity in the same investment structure, complemented by a codification of sovereign immunity and limiting of the foreign pension fund exemption from withholding taxes to ensure the surgical sutures are not undone.

The Australian Taxation Office (ATO) and Treasury have long been concerned about the potential and actual abuse of stapled structures to minimise corporate tax, given the significance of corporate tax collections in Australia (25% of total tax collections, excluding GST).

The ATO’s taxpayer alert TA2017/1 drew attention to the issues associated with stapled structures, identifying four particular categories of staples, described in Gilbert + Tobin’s insights. Further, in a recent address to tax practitioners, Deputy Commissioner Jeremy Hirschhorn made it very clear the ATO had strong legal advice that the general anti-avoidance provisions could be successfully applied by the ATO to challenge stapled structures.

What do the changes mean?

The first measure explicitly targets stapled structures. Stapled structures, for this measure, are an arrangement where a MIT and a corporate entity are largely commonly owned by the same investors, directly or indirectly (no contractual or economic stapling arrangement is required).

From 1 July 2019, if the MIT owns assets and the corporate entity pays amounts in respect of those assets (directly, as in alternative 1 below, or indirectly, as in alternative 2 below), the withholding tax rate on fund distributions by the MIT to investors with a foreign address will increase from 15% (or 10%, in the case of a MIT investing in clean buildings) to 30%. 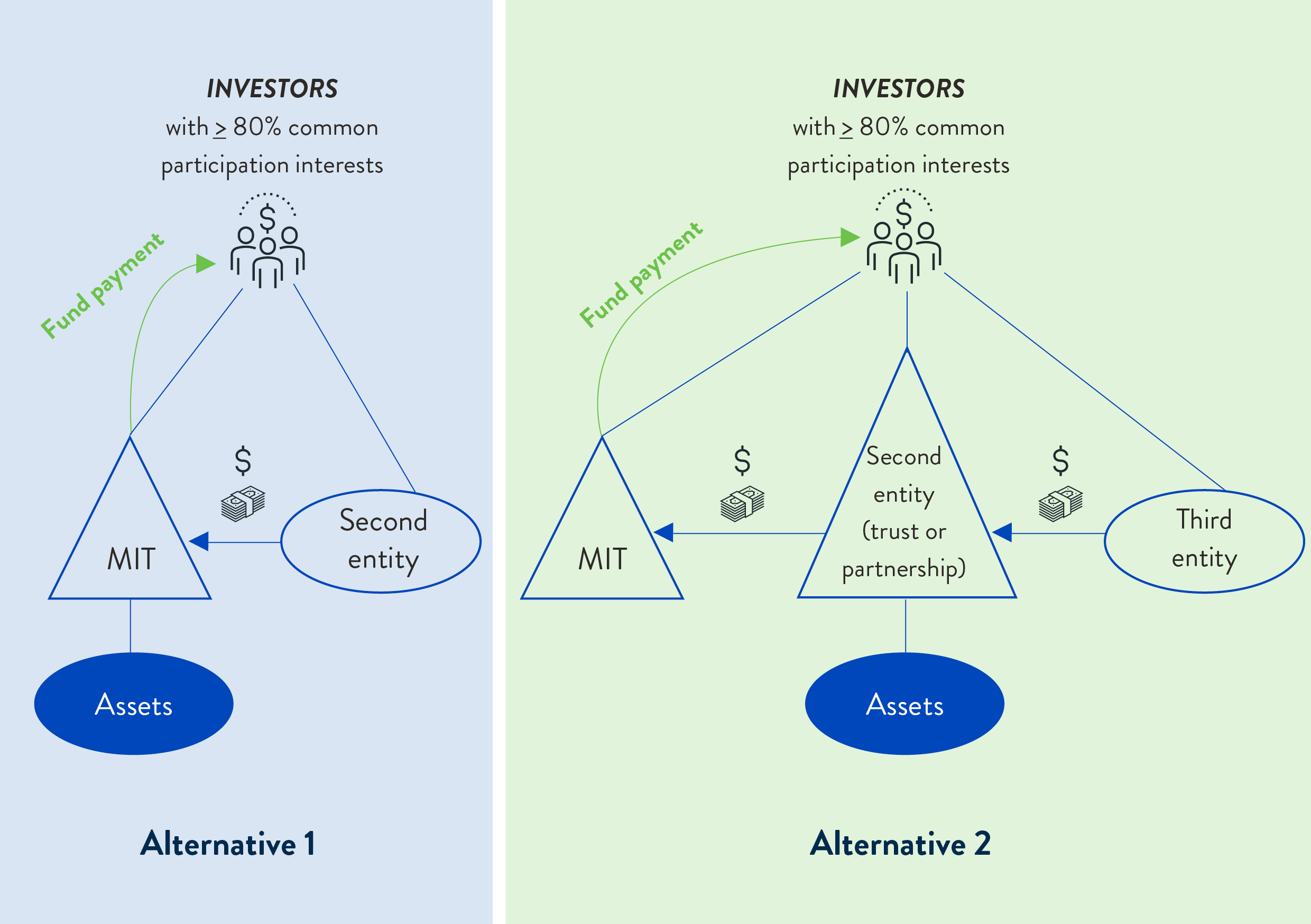 Specifically, the fund distribution must be attributable to “non-concessional MIT income” (see below) and the applicable withholding tax rate is the highest prevailing corporate tax rate (currently 30%). Distributions continue to have “flow through” treatment and Australian resident investors are unaffected.

What income is targeted

Non-concessional MIT income is essentially the amount paid from the corporate (operational) side of a stapled structure to the trust (asset owning) side of the stapled structure. It is the amount referred to in the table below if the following conditions are satisfied: 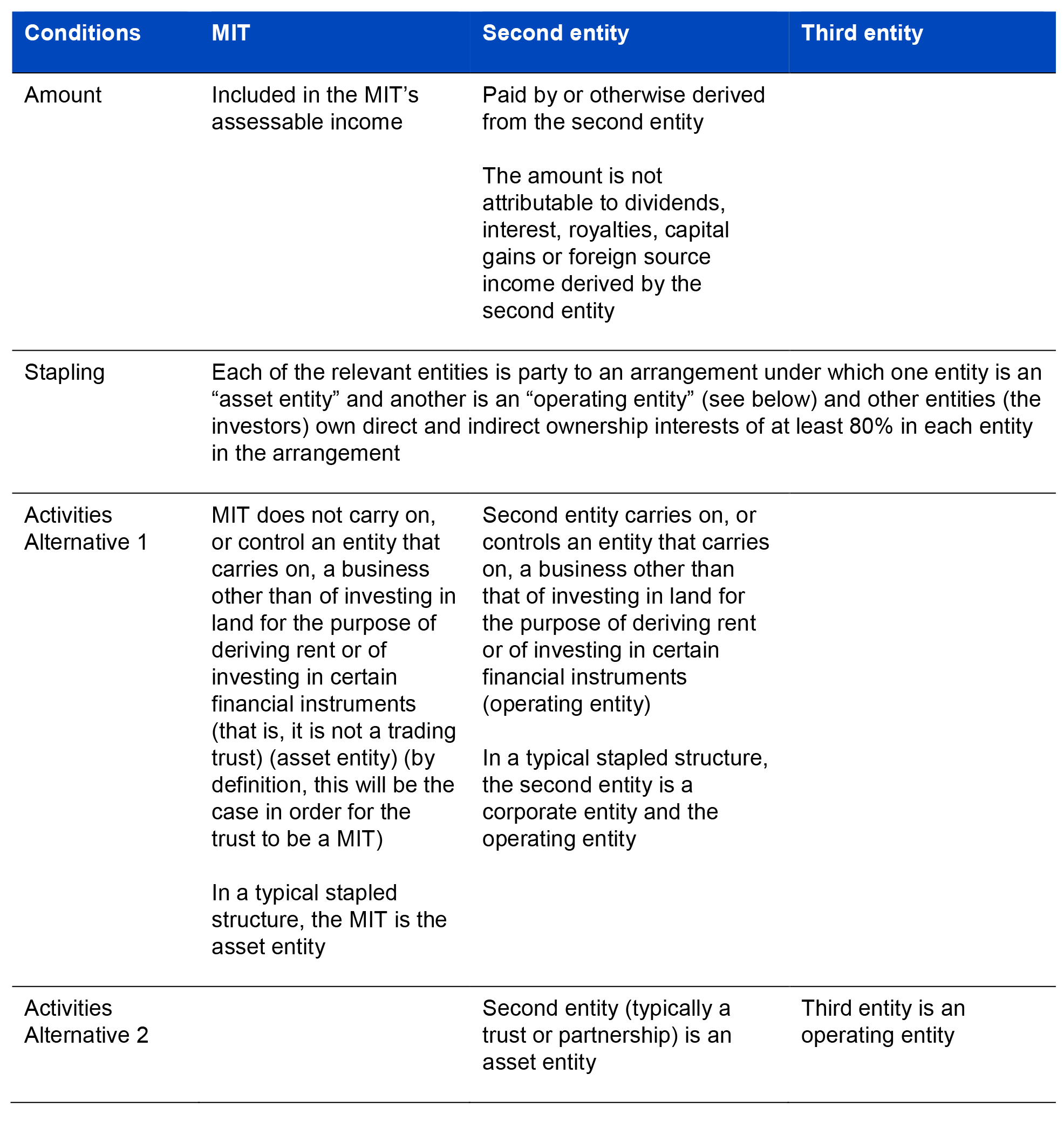 What the reforms do not apply to

The measure does not affect the treatment of these amounts:

However, these amounts may still be caught where the MIT holds a direct or indirect ownership interest in the second entity which is a trading trust (or would be one if the entity was a unit trust).

Rental income in respect of an asset that is approved by the Treasurer is not subject to the increased withholding tax rate for a period of up to 15 years (measured from when the asset is first put to use). An Australian Government agency, other than the Commonwealth, may make the application to the Treasurer in respect of the asset. In considering whether to approve such an application, the Treasurer must be satisfied the following conditions are met:

These conditions mean that privatisations in themselves will generally not qualify. The process is expected to follow the current approach of Infrastructure Australia, which may be the principal application body, and there are some administrative obligations on the Treasurer once an approval has been made.

Interestingly, land must form part of the relevant asset in order for there to be rental income.

(a) Tax consequences not linked

There is no linkage between the MIT withholding tax rate and the tax position of the operating entity. For example, if the operating company was in tax losses (leaving aside the cross staple payment), the withholding tax would continue to apply. The Government’s position on this is that, if the business had been carried on by a corporate, the corporate would only have been able to pay an unfranked dividend subject to withholding tax of up to 30%.

However, an unfranked dividend by a company may be subject to concessional withholding tax rates under a tax treaty. Trust distributions in themselves are generally not treated as dividends for the purposes of the treaties and hence should not qualify for concessional withholding tax rates under the treaties. This may be a change worth pursuing in consultation with Treasury.

Proposed section 12-453 of the Exposure Draft contains an interesting position. It permits the operating entity to claim a deduction for rent paid in a cross staple arrangement where, broadly, the asset is subject to the approved economic infrastructure exception. Importantly each party to the cross staple arrangement must make a choice to claim a deduction under this section.

This election appears to be a mechanism to turn off the anti-avoidance measures in Part IVA by creating a deduction available under an election (which is in itself an exception to the operation of Part IVA). This reinforces the ATO’s view that Part IVA could be successfully applied to stapled structures generally.

This then raises the question as to what could happen in other stapled arrangements where the higher MIT withholding tax rate applies to fund distributions and the corporate entity is entitled to a deduction under general principles without an election. Deputy Commissioner Jeremy Hirschhorn has acknowledged publicly that, while not exactly true in all circumstances, roughly 30% tax should be collected on both sides of the structure under the new measure. He has indicated the ATO would not seek to apply Part IVA in such circumstances.

With respect, unless the abovementioned view is legislated, taxpayers are at the mercy of the ATO. Whilst senior members of the ATO may have acknowledged that the ATO will not seek to apply Part IVA, frontline audit officers may not respect this acknowledgement. Generational or radical change in the ATO and the way it practically administers the law may expose future taxpayers to precisely this issue. The scope of the potential application of Part IVA is another change worth pursuing in consultation with Treasury.

It is unclear precisely how the exemption from interest withholding tax will interact with the portfolio-like test. The Explanatory Memorandum to the Exposure Draft indicates that rights conferred by a debt interest are disregarded if those rights arise because of a breach of terms of the debt interest. This exclusion is not in the actual legislation and therefore should be taken with a grain of salt. If a foreign pension fund was to only lend money with prescriptive terms of debt (albeit, with no active ability to influence the borrower’s decision making), it will presumably be able to obtain the exemption, opening up planning opportunities. This may be addressed in the second phase of these measures or as part of revised legislation (following consultation).

The third measure will create a legislative framework for the sovereign immunity exemption and limit the exemption from taxes to foreign government investors with portfolio-like interests (again, with no influence). The exemption will not apply to distributions of active business income, including distributions through trusts.

The codification of the exemption makes it clear that there is no general principle of sovereign immunity in the Australian tax law, contrary to past administrative practices by the ATO. This measure is seen by Treasury to complement the first measure so that sovereign investors in MITs do not get around the increased withholding tax rate by claiming sovereign immunity.

The final measure relating to thin capitalisation is designed to prevent the multiple gearing of the same underlying asset within transparent entity structures (that is, those with trusts and partnerships). Under existing law, it is possible to gear cascaded trusts and partnerships at each tier where, broadly, each tier does not control 50% or more of other parts of the tier. The existence of multiple layers of debt within a structure allows multiple streams of interest to be paid to non-residents, which are typically subject to a 10% interest withholding tax rate. In contrast, distributions of trading income to non-residents from a MIT should be subject to a 15% withholding tax and distributions of unfranked dividends may be subject to dividend withholding tax at rates of up to 30%.

Under the measure, the relationship threshold will be lowered from 50% or more to just 10% or more. There is also a consequential change to the arm’s length test, requiring testing against the ultimate underlying property with consideration given to other debt claims against the property.

Where an interest of 10% held by a transparent entity is considered to give rise to an associate relationship, any asset consisting of an investment of 10% or more will be excluded from the transparent entity’s safe harbour (that is, maximum allowable debt) calculation.

Furthermore, with an interest of 10%, it is almost impossible to compel the underlying entity to provide an investor with the financial and tax information necessary to be able to undertake thin capitalisation calculations properly, meaning there is either no gearing at the interposed entities or, more likely, the thin capitalisation rules are applied conservatively with greater interest deductions denied than would otherwise have been the case.

This measure will operate without regard to the commercial purpose behind the cascading of transparent entities, which means investors with non-tax reasons for the cascaded trusts and partnerships will suffer.

This measure will apply to income years on or after 1 July 2018.

There was an expectation that the stapled trust measures, when announced, would also legislate on the control issues that plague the funds management industry, including in private equity and venture capital. The Exposure Draft does not deal with these issues, leaving taxpayers to the ATO’s interpretations.

What should taxpayers and fund managers do?

However, new funds (or existing funds that still anticipate the incorporation of entities) should consider their use of MITs and stapled structures. MITs will still likely be the fund vehicle of choice, as funds should generally not be worse off than other vehicle choices. However, the new law will limit the tax benefits of forming a stapled vehicle for the pure sake of tax – a policy win for the Government.

Managers should also review their investor list and check whether any pension or sovereign funds will be affected.