On July 27, only hours after the Senate passed, by a vote of 64-33, a pared-down version of the Creating Helpful Incentives to Produce Semiconductors for America (CHIPS) Act (H.R. 4346), Senate Majority Leader Chuck Schumer (D-NY) and Senator Joe Manchin (D-WV) announced they had reached an agreement on a budget reconciliation package.

The reconciliation legislation, called the Inflation Reduction Act of 2022 (IRA) (H.R. 5376), is a much pared-down version of the House-passed Build Back Better (BBB) bill. After negotiations throughout the spring and summer, the Senate was expected to consider a scaled back version of the BBB bill focused largely on Medicare Part D prescription drug reform and Affordable Care Act coverage subsidies. The IRA expands on that scope to include, with modifications, a number of tax provisions from the original BBB bill, including increased funding for the IRS, a new 15% corporate book minimum tax, and an extension of energy tax incentives. The IRA also includes further limitations on carried interests, which were removed from the BBB bill before the House voted on it. Missing from the bill are any international provisions designed to bring the GILTI regime into conformance with Pillar 2 and any change to the limitation on the state and local tax deduction.

It will be important to see whether the IRA is amended before it is voted on, for example whether there will be any modifications to the corporate book minimum tax provision, whether the provision about carried interests will remain in the bill, and whether some members of Congress will insist on relief regarding the state and local tax deduction.

The IRA would impose a 15% alternative minimum tax (AMT) on adjusted financial statement income for corporations with a three-year average annual income over $1 billion. Corporations under common control are aggregated to determine whether this threshold is met. Corporations would generally be able to claim net operating losses and tax credits against the AMT, but companies with accelerated depreciation, compensatory stock options, and tax-exempt bonds would be significantly impacted. This provision was modified from the House-passed BBB bill to add an adjustment to book income (1) for income or expense on defined benefit pension plans to account for mark-to-market accounting, and (2) to take into account only unrelated business taxable income or debt-financed income of tax-exempt organizations.

Modification of Rules for Carried Interests

The IRA would modify the existing carried interest rules to require a five-year holding period instead of a three-year holding period to qualify for long-term capital gains treatment. However, the five-year clock does not start running until the later of the date on which the taxpayer acquired substantially all of the applicable partnership interest or the date on which the partnership acquired substantially all of its assets. This means that the initial investment period for a fund, a follow-on financing, or vesting of carried interests for partners could substantially delay the running of the five-year clock.

The IRA would provide:

Beyond the funding increases, the IRA includes additional provisions that were not included in the BBB bill that would direct the IRS to establish a task force on the design of an IRS-operated free “Direct Efile” tax return system and report to Congress within nine months.

Many of the energy security and climate change provisions in the IRA are drawn from the climate provisions of the BBB bill. This includes, for example, lower base rates with higher bonus rates if (1) prevailing wage and apprenticeship requirements are met, (2) domestic content requirements are met, (3) a wind or solar project is located in a low-income community or on Native American land, or (4) certain projects are located on or adjacent to tracts where oil and gas or coal power were significant. However, several significant changes have been made, some of which are summarized in the chart below.

According to the topline estimates released by Senators Manchin and Schumer in their summary of the IRA, the energy security and climate change provisions are expected to cost approximately $369 billion over the 10-year budget window. Notably, this appears to be a cost increase of $57 billon relative to the corresponding provisions of the BBB bill, despite the removal or reduction in scope of many provisions from the BBB bill. Without more detail about the score, the source for this increase is not entirely clear. However, the expanded transferability of many renewable energy tax credits (described below) is likely a significant factor. 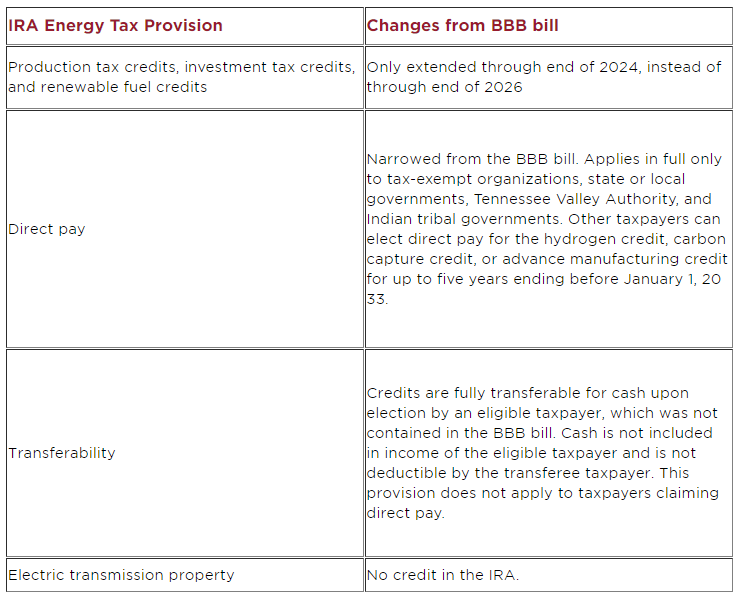 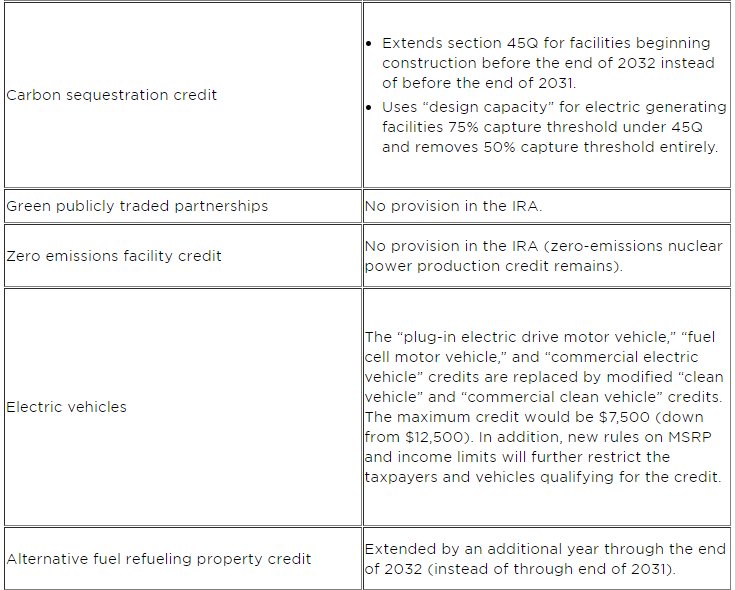