In October of 2017, the Federal Circuit issued an en banc decision in Aqua Products Inc. v. Matal, holding that patent owners no longer bear the burden of proving patentability of their amended claims. Instead, the burden appears to be on the petitioner or, in some cases, is shared by the Patent Trial and Appeal Board’s (PTAB).[1] Before the Aqua Products decision, the PTAB placed the burden of demonstrating patentability of amended claims in AIA trials on the patent owner, which severely limited the effectiveness of motion to amend practice. Many stakeholders and practitioners anticipated a substantial rise in motion to amend success rate in view of the shift in burden for proving unpatentability. New statistical data shows there was a noticeable uptick in motion to amend filings for FY2018.[2] 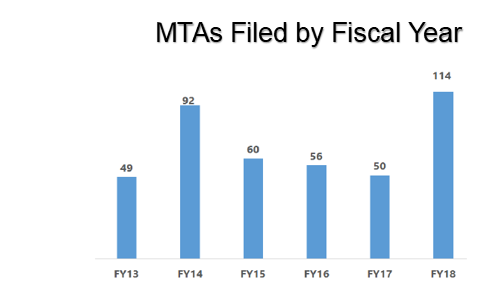 In our previous article, we presented preliminary statistics showing that the motion to amend grant rate appeared to more than double in the first few months after the Aqua Products decision.[3] The uptick in grant rate indicated that the post-Aqua Products landscape may be slightly more favorable to patent owners. But, would the trend continue? 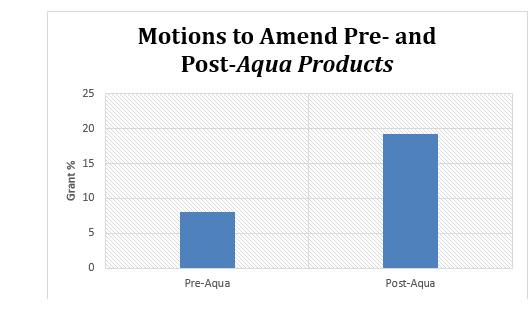 Preliminary statistics showed an interesting trend for motion to amend success rate in the early months following Aqua Products. The total number of motions to amend granted in March and April of 2018 was almost equal to the number granted in the immediately preceding five months combined. March and April appear to have been outliers, however, with the grant rate dropping to less than one per month from May through November 2018. From December 2018 through February 2019, however, the grant rate rose sharply to about 23%. 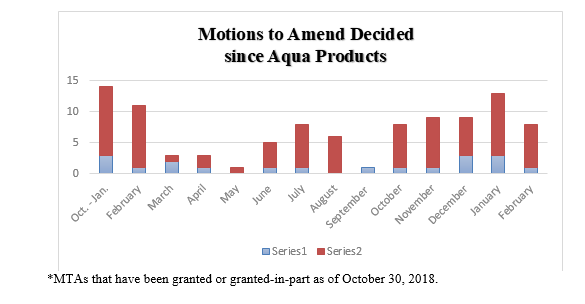 To be clear, although the month-to-month statistics may vary significantly, on the whole, motions to amend are being granted post-Aqua Products at more than twice the rate as before that decision. Although it now may be easier to amend challenged claims during AIA trials, contrary to some expectations, the grant rate still remains quite low (less than 20%).

These changes to MTA practice stem from Director Iancu’s initiative to give patent owners a meaningful opportunity to amend claims in post-grant proceedings. The Director has been vocal about his desire to modify MTA practice, and the new Notice takes active steps to provide patent owners feedback on proposed claim amendments.[6] The Notice also provides patent owners with the opportunity to modify their amendment strategy in response to this feedback, if requested, and/or Petitioner’s arguments. Although MTAs are being granted more liberally post-Aqua Products, the new MTA pilot program may signal an appreciable increase in grant rate that could dwarf the impact of Aqua Products.