TTABlog Test: Is this Mutilation of a Tire-and-Boot Design, or Not?
Blog The TTABlog

The Board observed that a drawing that depicts only a "minor alteration" of the mark as used "does not create a new and different mark crating a different commercial impression" from the matter shown in the specimen is acceptable. A drawing must depict a "complete" mark as evidenced by the specimen; if not it is considered to be a "mutilation."

Substantially exact representation: An applicant has some leeway in choosing the mark it wants to register. "The determinative factor is whether or not the subject matter in question makes a separate and distinct commercial impression apart from the other element(s)." TMEP Section 807.12(d) (April 2017). The question of mutilation requires a parallel analysis.

The Board found that the mark sought to be registered is "validly displayed on the specimen of use." It conveys a "very distinct" commercial impression: the incongruous juxtaposition of a boot inside a tire. The Board agreed with applicant that the differences between the drawing and the specimen "are not critical and do not alter the overall commercial impression of the applied-for mark."

Moreover, the fact that the mark displayed in the drawing is a line drawing of a boot within a tire, while the mark shown on the specimen of use is a photographic representation of a boot inside a tire, does not alter the overall essence or commercial impression of the mark. Indeed, we are unaware of nor has the Trademark Examining Attorney cited to any case law or rule which prohibits an applicant from providing a simplified drawing of its applied-for mark when the specimen of use displays a photographic or three-dimensional representation of the mark.

The additional elements in the mark shown on the specimen do not detract from the applied-for mark or change its commercial impression: a boot inside a tire. More than one mark often appears on merchandising material, and an applicant is free to choose which one it wants to register. The wording and the tree logo on the specimen are not so integrated with the boot-and-tire design as to constitute a single composite mark.

And so the Board concluded that the drawing is a substantially exact representation of the boot-inside-tire design depicted on the specimen of use. 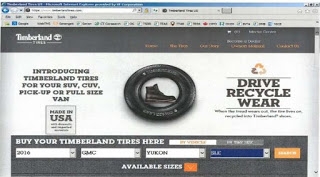 Mutilation: The Board found that the boot-in-tire design constitutes a distinct trademark that makes a separate and distinct commercial impression separate and apart from the other elements displayed.

The additional word marks shown in the specimen of use are not inextricably bound to each other in any logical, discernable way and there is no substantial interrelationship between the additional terms and the boot and tire design itself that causes them to constitute a single, inseparable mark. We therefore find that the drawing of the mark is not an incomplete version of the mark used by Applicant on the specimen of use.