Singapore is a vibrant country in Southeast Asia. With its excellent location, it is a hub for resolving many construction disputes across the Asia-Pacific region. This has allowed Singapore to develop a significant and coherent body of case law on construction disputes. Singapore has also been active in passing legislation (e.g., the Building and Construction Industry Security Payment Act) and promoting dispute resolution mechanisms (e.g., the Singapore Infrastructure Dispute-Management Protocol) which are specifically tailored toward the construction industry.

Singapore is a common law country, with its laws primarily based on English law.

The SOP Act broadly applies to contracts for construction work entered on or after April 1, 2015 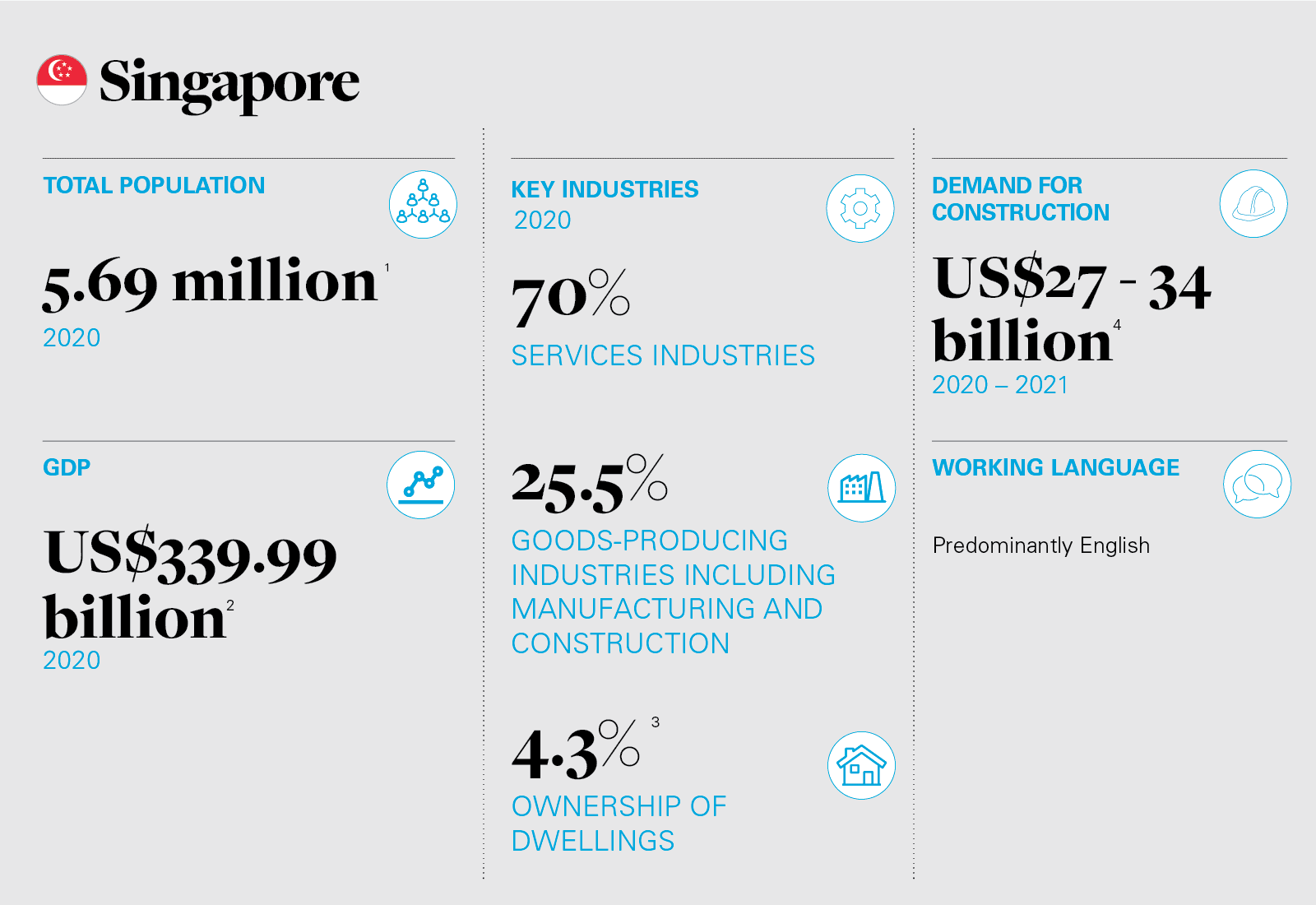 Are there any restrictions on foreign investment?

Under Singapore law, a breach of contract does not automatically allow a party to terminate the contract

Is your contract enforceable under Singapore law?

Generally, Singapore law recognizes and upholds freedom of contract. It is the exception, rather than the norm, that a clause might be deemed unenforceable. Nevertheless, in a few situations, key clauses of a construction contract may be unenforceable under Singapore law. Two types of clauses are of particular interest:

a. Penalty or liquidated damages clauses

Liquidated damages are ascertained damages that the parties agreed to be payable should the contract be breached.

A liquidated damages clause is enforceable in Singapore, as long as it represents a genuine pre-estimate of loss. Otherwise, it will be treated as a penalty and not be enforced.

Whether a clause is a liquidated damages clause or a penalty is a matter of construction. It is determined in light of the facts and circumstances when the contract was signed. As set out recently by the highest court in Singapore (the Court of Appeal), the key test is whether the stipulated sum is "extravagant and unconscionable" in amount in comparison with the greatest loss that could conceivably be proved to have followed from the breach.5 The position in Singapore differs from that in the United Kingdom where the question is whether the clause imposes a detriment that is out of proportion to any "legitimate interest of the innocent party."6 The Singapore Court of Appeal had noted the considerable uncertainty over what constitutes a "legitimate interest," and declined to adopt the UK approach.

b. Exclusion and limitation of liability clauses

Whether an exclusion or limitation of liability clause will have its intended effect depends on three main elements: incorporation; construction; and regulation.

For the clause to be effective, it has to be incorporated into the contract. This could be done by signing the contract,7 bringing the clause to the other party's attention before or at the time the contract is made,8 or on the basis of the parties' prior course of dealing.9

The clause has to clearly set out the situations under which a party's liability would be excluded. Any ambiguity will be resolved against the party seeking to rely upon the clause.10 For example, to exclude liability for negligence, it would be preferable to expressly refer to the word "negligence" in the clause.11

Singapore adopts a less strict approach for limitation of liability clauses as compared to exclusion clauses. This is because Singapore law recognizes that these clauses are part of the overall risk and remuneration allocation between the parties, and that it is possible for the other party to insure.12

An exemption of liability clause might also be subject to certain statutory restrictions. The Unfair Contract Terms Act (UCTA) imposes two key restrictions on commercial contracts.13 First, any exclusion or limitation of liability for negligence must satisfy the requirement of "reasonableness," as defined in the statute.14 Second, where a party deals on the other's written standard terms of business, any exclusion or limitation of liability (whether for negligence or otherwise) must also satisfy the reasonableness test.15

Depending on the location of the parties/transaction, these restrictions might not apply (e.g., they generally do not apply to international sale of goods contracts, or where the governing law of the contract would have been the law of some country other than Singapore, but for the parties' choice of Singapore law).16

How does a contractor secure adequate cash flow in Singapore?

The SOP Act provides, among other things, a right to progress payments. This means that under certain circumstances, a contractor can claim payments for the carrying out of construction work, or the supply of related goods or services, under a construction contract. The claims process is relatively straightforward. A contractor first serves a "payment claim" on a respondent, who must then serve a "payment response." Where payment is disputed (or the respondent otherwise fails to pay), the contractor may apply to an authorized nominating body, which appoints an adjudicator. The respondent may reply to the application, after which the adjudicator will make a determination. The process typically takes a matter of weeks.

The adjudication decision is binding on the parties unless or until any dispute between them is resolved by agreement or determined by a court or arbitral tribunal.

When does a right to terminate arise from a breach of contract under Singapore law?

The starting point is that a breach of contract does not automatically allow a party to terminate the contract.

If the contract does not provide such a right, the innocent party may terminate the contract in broadly three situations:

b. Breach of a condition: A condition is defined as a term that the parties have agreed to be so important that its breach would entitle the innocent party to treat the contract as discharged.21 The focus here is on the nature of the term breached, and not the consequences of the breach.

Singapore has been at the forefront of developing alternative dispute resolution procedures, including mediation and dispute board determination

When might the parties' obligations be amended, or performance excused due to unforeseen circumstances?

Under Singapore law, the parties are free to agree to contractual provisions dealing with unforeseen circumstances. For example, the parties can agree to a hardship or force majeure clause. A force majeure clause is an agreement on how outstanding obligations should be resolved when affected by unforeseeable events.25 It contractually allocates the risks between the contracting parties with regard to those events, which would be specified in the clause.26

Even if the parties have not provided for it, a contract can be discharged by frustration. This is when, without the default of either party, a contractual obligation has become incapable of being performed because performance in the circumstances would be radically different from what was undertaken in the contract.27

When a contract is frustrated under common law, it is automatically discharged.30 Parties can exclude the doctrine of frustration by doing so clearly and unambiguously in the contract.31

A Singapore court may allow a party to recover payments made or expenses incurred before the frustrating event occurred, depending on the circumstances of the case and whether it is just to allow such recovery.32

Because of their nature and function, both frustration and force majeure could be relevant when there is a radical external event that occurs during the course of the contract's performance, which was not due to the fault of any of the contracting parties.33 Whether either applies would depend heavily on the circumstances of the case and, for force majeure, the precise wording of the force majeure clause.

How can disputes under construction contracts be resolved?

The two most common methods of dispute resolution in Singapore are litigation and arbitration:

Singapore has also been at the forefront of developing alternative dispute resolution procedures, including mediation and dispute board determination:

The SIDP is designed and recommended for construction or infrastructure projects worth more than SGD 500 million. This may be due to the potentially high expenses of engaging a Dispute Board from the start of the project.