The FTC and the DOJ, under progressive leadership, continued their vigorous enforcement efforts against mergers and acquisitions this quarter. The agencies demonstrated their willingness to challenge transactions outright—including vertical mergers—rather than entering into consent agreements with merging parties. In recent remarks, FTC and DOJ personnel highlighted that many recent policy changes at the agencies are aimed at creating uncertainty, heightening risk and raising the transaction costs of doing deals to slow the pace of M&A activity. Agency leaders also stated that they expect to challenge more transactions in court.

On February 24, 2022, the DOJ, together with the attorneys general in Minnesota and New York, filed a complaint in the DC federal district court to block UnitedHealth Group’s acquisition of Change Healthcare. The DOJ also filed a complaint on March 17, 2022, to block Grupo Verzatec S.A. de C.V. from acquiring Crane Composites.

The FTC had a major victory and a significant defeat in two merger cases it filed previously. On March 22, 2022, the US Court of Appeals for the Third Circuit affirmed a federal district court’s decision to grant the FTC a preliminary injunction blocking the merger of two hospital systems in northern New Jersey: Hackensack and Englewood. Earlier in the quarter, on February 15, an FTC administrative law judge dismissed FTC staff’s complaint that sought to unwind Altria’s 35% equity investment in JUUL Labs.

Both US antitrust agencies are increasingly skeptical that merger remedies—both behavioral and structural—are effective in preserving competition. In a speech delivered on January 25, 2022, the Assistant Attorney General for the DOJ’s Antitrust Division, Jonathan Kanter, stated that when the antitrust agencies find a competitive problem with a transaction, they should generally seek to block the deal outright rather than require divestitures. Kanter said remedies are highly disfavored and that only in rare instances can a divestiture remedy an otherwise anticompetitive transaction. In the Cargotec and Konecranes merger, the parties abandoned the transaction after the DOJ, like the UK CMA, rejected the settlement stating, “The department will not accept patchwork settlements that do not replace the competition that is lost by a merger.”

On January 18, 2022, the FTC and the DOJ launched a joint public inquiry aimed at modernizing the current Horizontal Merger Guidelines. The agencies are likely to issue jointly a new set of merger guidelines, but the timing remains unclear. The agencies have not excluded the possibility of issuing one new set of guidelines that covers horizontal and non-horizontal transactions. Leaders at the FTC and the DOJ have stated that they are striving to make the new guidelines easier for lay people to understand in order to increase transparency and provide clear guidance as to transactions the agencies would consider anticompetitive. The updated guidelines are also likely to give more attention to labor market concerns and threats to nascent competition and innovation.

The Commission continues to aggressively conduct in-depth analyses of proposed transactions through Phase II investigations. In the first quarter of 2022, the Commission conditionally cleared two cases in Phase II. Unlike the US antitrust agencies and the UK CMA, the Commission appears willing to accept behavioral remedies to address vertical concerns. For example, the Commission conditionally cleared the Meta / Kustomer transaction, requiring comprehensive API access commitments with a 10-year duration. The commitments addressed the EC’s concerns that the transaction would reduce competition in the market for the supply of customer relationship management (CRM) software and the market for the supply of customer service and support CRM software. While the Commission also cleared the Cargotec / Konecranes transaction in February 2022, following a Phase II investigation involving commitments, the UK CMA later blocked the transaction. (See United Kingdom Key Themes & Takeaways and Notable European & UK Cases.)

Three transactions in Phase II proceedings were abandoned: Kingspan / Trimo, Nvidia / Arm and Greiner / Recticel. The Commission blocked the Hyundai Heavy Industries Holdings / Daewoo Shipbuilding & Marine Engineering transaction nearly three years after the transaction was announced because the parties failed to formally offer remedies to address the Commission’s concerns that the transaction would create a dominant position and would reduce competition in the worldwide market for the construction of large liquefied-gas carriers.

In October 2021, the Commission opened an investigation into Hungary’s decision. On February 21, 2022, the Commission held that Hungary’s prohibition decision infringed Article 21 of the EUMR, which provides the Commission with exclusive competence to examine concentrations that have a “[European] Union dimension.” While member states may take measures to protect legitimate interests under certain conditions, such measures must be compatible with the general principles and other provisions of EU law and must be genuinely aimed at protecting a legitimate interest.

In the United Kingdom, Phase II investigations have also featured prominently in the first quarter of 2022, although the CMA cleared just one transaction in Phase II: Sony Music Entertainment / AWAL and Kobalt Neighbouring Rights on March 16. The CMA blocked two transactions following a Phase II investigation: Cargotec / Konecranes and JD Sports Fashion / Footasylum (including requiring JD Sports to unwind the entire Footasylum acquisition). (See discussion below and Notable European & UK Cases table.) Finally, the CMA dropped its Phase II investigation in Nvidia / Arm on February 8, after receiving written assurances from the parties that the proposed transaction had been abandoned.

The CMA blocked the merger of Cargotec and Konecranes just one month after the Commission cleared the transaction subject to commitments in Phase II. The CMA referred the transaction to a Phase II investigation due to concerns that the merger may result in a substantial lessening of competition for the supply of various equipment. Although the parties offered structural remedies to allay the CMA’s concerns, including two separate partial divestiture packages, the CMA deemed the proposed remedies insufficient primarily due to the fact that the proposed remedy involved divestiture of partial assets from each party, rather than a standalone business. On March 29, 2022, the CMA blocked the transaction, which was later abandoned. (See Notable European & UK Cases.)

The CMA’s decision in this matter further demonstrates that the CMA will not shy away from taking a divergent approach from that of the Commission in evaluating transactions.

When probed, at the American Bar Association (ABA) Spring Meeting in April 2022, on the antitrust enforcers’ diverging approaches to the transaction, Commissioner for Competition and Executive Vice-President of the Commission Margrethe Vestager replied that this case should not be seen as a sign of deteriorating trust between the regulators. She explained that the Commission conducted two market tests and found that the remedy package was viable and that the market situation in Europe differed from other jurisdictions evaluating the transaction.

The CMA imposed a second fine on Meta (formerly Facebook) for allegedly breaching the terms of an Initial Enforcement Order issued following Facebook’s acquisition of Giphy. As reported in last quarter’s M&A Snapshot (available here), in October 2021 the CMA fined Facebook (now Meta Platforms, Inc.) £50.5 million for allegedly breaching the initial enforcement order it issued in June 2020 preventing Facebook and Giphy from further integrating their businesses pending the CMA’s investigation into the transaction. On February 4, 2022, the CMA announced its decision to impose a second penalty of £1.5 million on Meta for its alleged failure to comply with the requirements of the initial enforcement order. According to the CMA, Meta allegedly failed to seek consent from and actively inform the CMA of changes to key staff prior to the departure of a staff member and the assumption of their responsibilities by another. The CMA’s action demonstrates it will aggressively enforce compliance with initial enforcement orders issued in connection with an investigation. 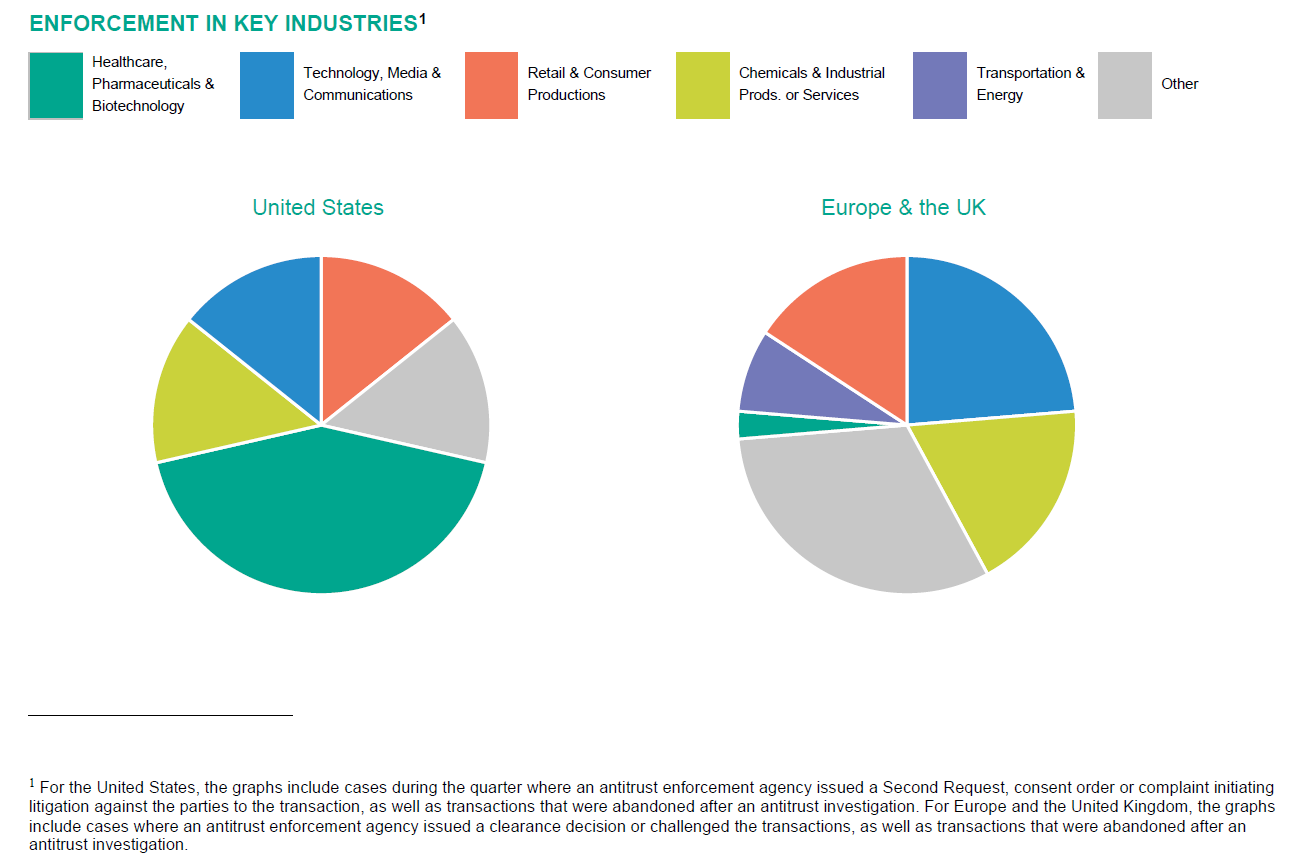 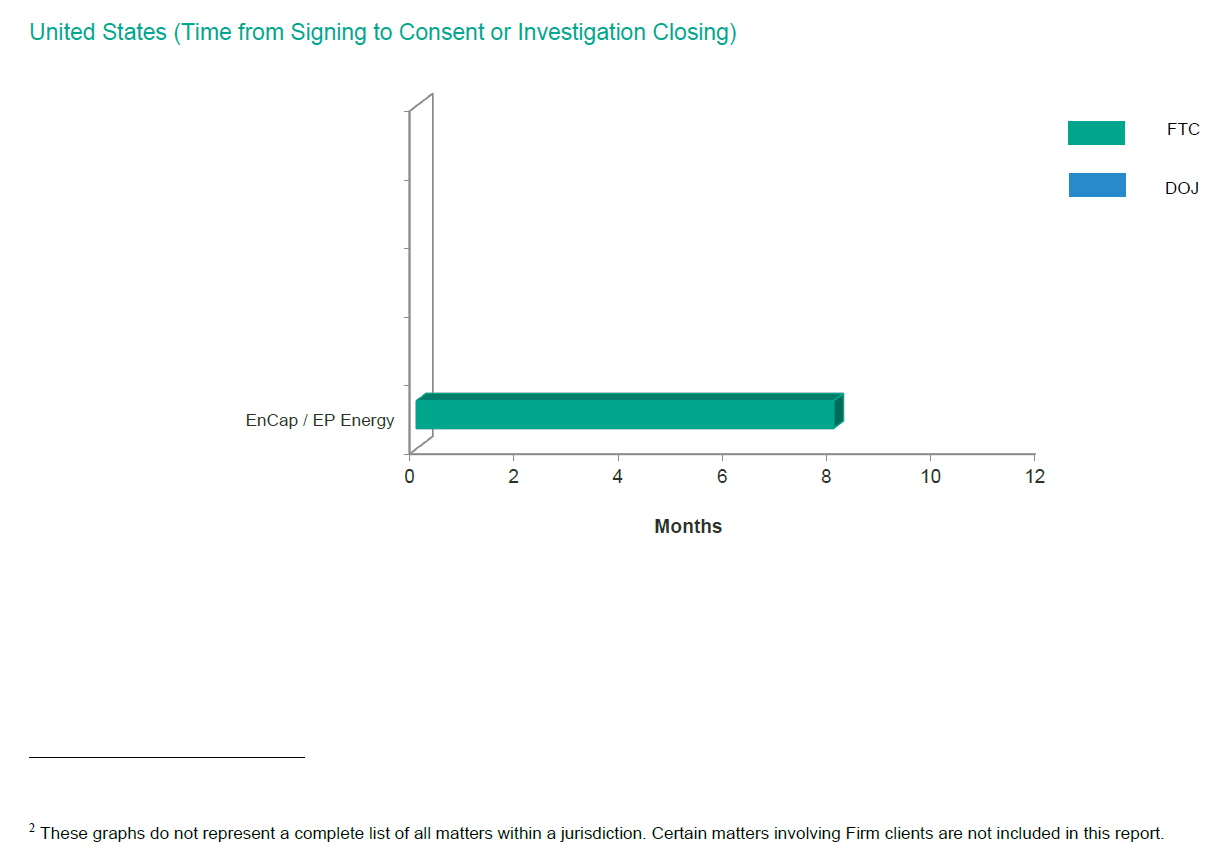