In comparison to overseas funds and foreign-invested enterprises, a QFLP fund allows overseas private equity (PE) / venture capital (VC) to participate in founding a RMB fund within China in the form of a limited partnership, which is favored by a majority of institutions because, among other reasons, QFLP as a partnership is a transparent entity for tax purposes with no income tax required at the partnership level. In addition, with respect to capital flow, a QFLP fund offers more flexibility in foreign exchange settlement, investment, capital reduction, and outbound remittance. Policy trends indicate that, further to equity investment, QFLP may be allowed to invest in private placements, asset backed securitizations (ABS) and bonds in the near future.

This year marked the tenth anniversary of the launch of the first QFLP pilot rule by Shanghai in 2010. Over the decade, the QFLP pilot areas have gradually expanded in China, currently consisting of Beijing, Shanghai, Tianjin, Qingdao, Shenzhen, Guizhou Province, Fujian Province, Zhuhai, Guangzhou, Suzhou and Shenyang. Hainan Province also released its QFLP policy this year amid the rapid development of its free trade port. By illustrating Hainan’s policy as an example, this article will provide a brief introduction to the current QFLP policies and practices in the localities.

A QFLP fund usually establishes a domestic fund in a pilot area for RMB settlement to invest in the equity of non-listed companies within China. It takes a basic structure as follows: 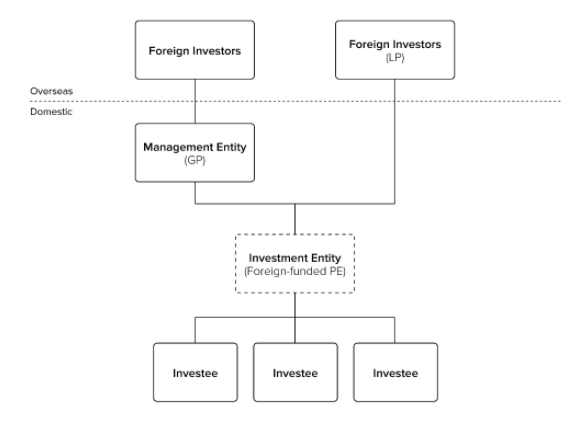 There are restrictions on the sectors for investment. A QFLP fund’s investment in China is mainly subject to the negative list prescribed by the Foreign Investment Law of the People’s Republic of China, and to the limits specified in the policy of each pilot area. For example, Beijing and Shanghai explicitly provided sectors where QFLPs cannot invest; Shenzhen and Zhuhai limit the scope of investment to equities of non-public companies; Zhuhai further excludes the fund of funds (FOF) from the scope of allowed investment by QFLP funds. Shanghai may adjust its policy this year to expand the investment scope from equity investment to preferred stocks, private placements, convertible bonds, distressed assets, etc. This would give Shanghai the most diverse scope of allowed investment among all pilot areas.

After meeting the basic conditions, partners of the fund should apply to establish the fund. A local competent authority in the pilot area, normally a working panel, will review the QFLP’s management and investment entities. As the application materials required by the local competent authority are different, it is generally difficult to estimate the timeline. Having said that, Hainan adopted a much more streamlined procedure for forming a QFLP locally and provided a specified list of required materials. Moreover, the competent authority in Hainan is at a high level of the local administration, empowering the authority to review a broad range of matters. Procedurally, an entity, upon receipt of a recommendation letter from a competent authority, can apply to the market regulation department for incorporation registration and then complete the foreign exchange registration with a bank.

Foreign exchange settlement remains at the heart of foreign equity investments in China. As the settlement of capital in a foreign currency is subject to the purpose of such settlement, the capital settled by a foreign invested company was normally prohibited from equity investment in the past. However, recently, this restriction was lifted, which allowed the capital settled by a non-investment type foreign invested company to invest in the equities of domestic companies. In practice, banks always require a proof of the “authenticity and compliance of the project”, review on a case-by-case basis, and complete the filing with the State Administration of Foreign Exchange (SAFE) on a project basis.

In practice, a QFLP fund, before its formation, is recommended to thoroughly communicate with the competent authority and the bank in the locality regarding capital settlement. The transactional structure and investment orientation (such as domestic real property, securities assets, or inter-company loan) are subject to the prohibitions[1] stipulated by SAFE.

When a QFLP fund intends to exit, it is able to realize the project exit by way of capital reduction or fund liquidation with flexibility in outbound remittance. Local authorities normally adopt a flexible approach to the review of project exit applications and facilitate outbound payments via foreign exchange accounts. This means a QFLP fund enjoys a much higher level of autonomy in terms of foreign exchange clearance in the context of equity investment. On that, the Hainan Province is in an advantageous position because SAFE has authorized its Hainan Branch to implement a policy that facilitates the remittance of foreign exchange for items with a capital nature, i.e., a “Capital Account”. According to the institutional design in the Overall Plan of the Hainan Free Trade Port, Hainan will “open Capital Accounts in stages” and promote the “liberalization and facilitation of cross-border capital flows.” To achieve these goals, Hainan is expected to launch more innovative policies and bring more convenience to the foreign exchange conversion and remittance by QFLPs.

4. Advantages in Finance and Tax

From the Chinese tax perspective, a QFLP fund has great advantages by nature because it is a transparent entity for corporate income tax purposes. This means that a QFLP fund is not required to pay income tax as a partnership, although the partners of the QFLP would be taxed according to their respective shares of the QFLP income. If a partner is an individual, his/her partnership income is subject to individual income tax; whereas if a partner is a company, the partnership income is subject to corporate income tax. In addition, foreign partners, upon meeting certain conditions, are entitled to favorable tax treatments under a tax treaty.

The investment form and the structure of QFLPs are increasingly complex in practice as the tax policies vary in different localities and the tax authorities adopt different attitudes and approaches, particular to matters such as tax base and taxable income. To optimize the tax burden of overall investment and exit, it is advised to seek tax lawyers’ opinions to analyze and compare different policies and to advise on the structures before forming a QFLP fund. We discussed this in more detail in an article titled The Fundamentals of Taxation on Partnerships in China on the International Tax published by Wolters Kluwer[2].

The management and investment companies can enjoy preferential tax treatments too. A VC fund can choose to be taxed based on a single fund accounting method vs. general accounting method. Under the single fund method, individual partners are allowed to pay their individual income tax at the rate of 20% for their capital gains from disposing different projects. Under the general accounting method, the capital gains are considered as business income and are subject to individual income tax at a rate ranging from 5% to 35%. A VC partner could offset against its taxable income, i.e., 70% of its investment amount, on the second anniversary of making the investment. The pilot areas also provide the management and investment entities with supporting policies to attract foreign investors to found QFLP funds in their localities. It is worth noting that the Hainan Free Trade Port explicitly includes the management entity of a QFLP fund in its encouraging program, under which the management entity, if in the form of a company, is subject to corporate income tax at a favorable rate of 15% as opposed to the general rate of 25%, and is entitled to financial subsidies. In addition, qualified executives of the management company are entitled to a favorable individual income tax rate capped at 15% and other types of rewards such as medical care and housing benefits.

Over the past decade, the QFLP pilot policy has gradually become more accessible and less restrictive for investors. With simplified founding and exit procedures and relaxed foreign exchange controls, it is believed that QFLP has a great potential to further develop in China and embrace a brighter future. We will continue to keep up with the policy trend of QFLPs and share our observations.