This coming October, USCIS is allowing a number of foreign nationals to apply for adjustment of status earlier than they would otherwise be eligible. Specifically, USCIS has announced that it will allow individuals with immigrant petitions in employment-based categories to apply for adjustment of status based on the cutoff dates in the “Dates for Filing” Chart of the State Department’s monthly Visa Bulletin (Chart B).

As a reminder, in October of 2015, the State Department made a change with respect to its monthly visa bulletin – it added a chart with a set of often earlier cutoff dates it called “Dates for Filing.” The “Application Final Action Dates” chart (Chart A) has continued to reflect the dates on which visa numbers are actually available for the approval of adjustment of status or immigrant visa applications. Chart B, on the other hand, was instituted to reflect an earlier set of cutoff dates which the State Department has historically used to begin initiating the immigrant visa cases. Since implementation, and when allowed by USCIS subject to monthly determinations, Chart B cutoff dates have provided individuals in the U.S. with valid nonimmigrant status the opportunity to file their adjustment of status applications prior to the date immigrant visas were available for approval, which in turn has given these individuals the opportunity to remain in the U.S. as green card applicants and obtain related benefits such as employment and travel authorization. 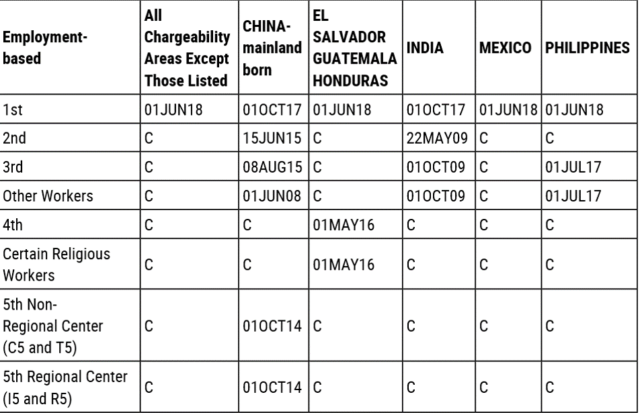 Mainland China-born EB-5 investors in the U.S. in lawful temporary visa status can file adjustment of status applications if the priority date of their approved I-526 petition is earlier than Oct. 1, 2014. The Chart B cutoff date is over a month later than the Aug. 15, 2014 cutoff date in Chart A, which extends the benefit of being able to file their green card application to a significant additional number of approved EB-5 Chinese investors. Furthermore, for Vietnamese-born EB-5 investors, Chart B for October is current, which means that all those Vietnamese investors and dependents with approved I-526 petitions who are in the U.S. in valid temporary visa status, regardless of the priority date of their petition, can file their green card applications in the month of October.

Importantly, applications for green cards filed pursuant to Chart B do not secure protection under Child Status Protection Act (CSPA), the application of which continues to be determined based on Chart A – the availability of immigrant visas for final adjudication/approval. In addition, important considerations for filing exist for individuals in certain visa statuses in the U.S. For details, please contact your GT attorney.