The State Administration for Market Regulation (SAMR), China’s state antitrust agency newly merged in 2018, is ready to integrate several prior regulations into a new set of comprehensive merger review rules which were released for public comment on January 7, 2020 (hereinafter, the 2020 SAMR Draft Review Provisions). While China’s antitrust law itself might change soon (read our post “China Set to Revise Its Anti-Monopoly Law with More Aggressive Provisions”), if adopted, this new draft regulation would become an “all-in-one” document regulating the agency’s review, investigation, and enforcement regarding mergers, acquisitions, and obtaining control or a decisive influence over another entity (collectively, “concentration of undertakings”). The comprehensive framework of the draft regulation is also likely to stay, with only some changes that may be required by the currently proposed revisions to the antitrust statute.

Previously, the Ministry of Commerce (MOFCOM) was responsible for merger reviews in China. In its 12 years of reviewing transactions, MOFCOM promulgated several sets of rules and guidelines under the Anti-Monopoly Law (AML) which became effective in 2008. Before being folded into SAMR in 2018, the MOFCOM’s antimonopoly bureau released a set of draft rules in 2017 (hereinafter, the 2017 MOFCOM Draft Review Measures) that aimed to integrate and replace two prior regulations promulgated in 2009. The 2017 draft rules ended at the public comment stage and were the last regulatory attempt to reshape China’s merger review regime.

SAMR now seems to have resumed this effort to integrate and streamline China’s merger rules. The draft rules it just released will likely become official soon. The 2020 SAMR Draft Review Provisions incorporate a greater number of substantive and procedural rules than did the 2017 MOFCOM Draft Review Measures. The following highlights several key changes proposed in the new regulation.

The 2020 SAMR Draft Review Provisions include six chapters and largely incorporate the following documents, which, except for the 2017 MOFCOM Draft Review Measures, are all the current merger review rules in China. 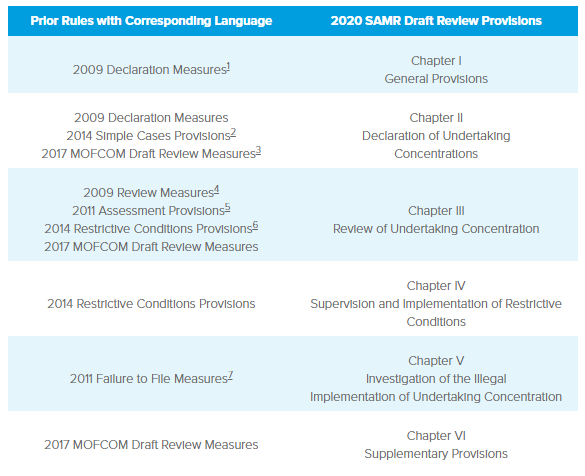 Article 18 (cf. Article 3, 2014 Simple Cases Provisions) narrows the scope of “simple case” reviews which provide for a truncated analysis of certain simpler deals under Article 17 (cf. Article 2, 2014 Simple Cases Provisions). Article 18 adds a new market share cap such that a deal that will change a joint venture (JV) from being jointly controlled by two or more undertakings to being controlled by only one of them and where the controlling undertaking and the JV compete in the same market, will not qualify for “simple case” status if “the combined market share of the controlling undertaking and the JV in the relevant market exceeds 15%.”

Article 20 (cf. Article 4, 2014 Simple Cases Provisions) seems to preserve more flexibility for SAMR to revoke a “simple case” determination by adding a catch-all ground for SAMR to do so wherever “other circumstance discovered in examination” would disqualify the deal as a “simple case.”

Article 47 (cf. Article 47, 2017 MOFCOM Draft Review Measures) adds more scenarios in which parties should consider proposing a particular buyer for assets they are divesting, including when “the identity of the buyer would have a decisive influence on whether competition can be restored” and when there are other reasons for SAMR to desire such a proposal. Article 47 further allows SAMR, when it sees fit, to require parties to halt their deal until the divestiture is completed.

The 2020 SAMR Draft Review Provisions contain a Chapter V (Arts. 72-87) that empowers SAMR to investigate “illegal implementation of undertaking concentration,” which is defined to include all mergers and acquisitions that violate the AML, China’s antitrust statute. Although the language is largely taken from existing rules, the proposed rules increase the scope of enforcement from only “failures to file” to encompass all “illegal implementation”—e.g., “gun-jumping” (actions by the merging parties prior to closing to facilitate the transaction and expedite the integration of the companies) and failures to fulfill commitments in settlements with the agency.

In summary, the 2020 SAMR Draft Review Provisions are intended to be an “all-in-one” regulation for China’s merger control regime, and the integration of previous rules and guidelines on merger filings is likely a welcome change to parties evaluating potential transactions. Meanwhile, given that under the new regulation, SAMR’s bandwidth could be significantly expanded with assistance from provincial-level agencies, and that the new enforcement focus on “illegal implementation of concentration” covers both failure to file and gun-jumping, China is poised to enhance its merger control regime.

Lessons learnt from the GDPR