Increased penalties for directors as bill passed by Senate

In our article The year ahead for directors: what’s in store for 2019?, we highlighted that one of the developments in store for directors was the significant increase in civil and criminal penalties for breaches of the Corporations Act 2001 (Cth) (Corporations Act) and other financial services laws through the Treasury Laws Amendment (Strengthening Corporate and Financial Sector Penalties) Bill 2018 (Penalties Bill).

The Penalties Bill is now one step closer to becoming law, with the bill being passed by the Senate on 14 February 2019 and 35 amendments proposed by the Opposition Party agreed to.

What is the impact of the amendments agreed by the Senate?

The amendments to the Penalties Bill agreed to by the Senate will see:

The amendments will significantly strengthen the penalties for corporate and financial sector misconduct.

Summary of the new proposed penalties

The new maximum penalties proposed for civil and criminal contraventions compared to the current penalties are summarised below: 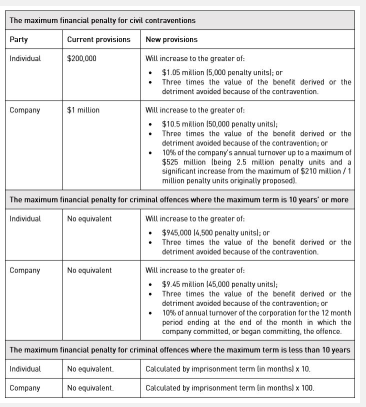 If you are a director, the passing of the Penalties Bill by the Senate means that ASIC will soon be able to pursue harsher civil and criminal penalties and sanctions against you for breaches of the Corporations Act and financial services law.

With its new ‘litigate first’ policy and in the wake of the Royal Commission, ASIC is raring at the bit to prosecute directors and individuals and has already foreshadowed it will be pursuing banks, their executors and others who have breached the corporate and financial services law. See here for ASIC’s media release.

The Penalties Bill with the amendments proposed by the Senate will now return to the House of Representatives for approval before it can be presented to the Governor-General for assent.

Watch this space to find out when the Penalties Bill will come into effect. It will then be a question of who will be first in ASIC’s line of fire.