AI Patent Trends in the U.S. Patent Office: Is the U.S. Losing Its Lead?

As noted in an earlier post on this blog (Using AI to Track AI Patents at the USPTO), the U.S. Patent and Trademark Office (USPTO) continues to see tremendous growth in the area of Artificial Intelligence (AI). While the USPTO’s October, 2020 Report “Inventing AI: Tracing the diffusion of artificial intelligence with U.S. patents” utilizes a broader set of metrics to gauge the number of AI filings generally, a simplified claims-based metric shows that U.S. applicants appear to be losing ground as the dominant filers in this field to increasingly diverse global competition.

As shown in Table I and illustrated in Figure 1, U.S. applicants increased their number of published AI claims-based patent applications in 2017 to 2020 by about 60% annually. 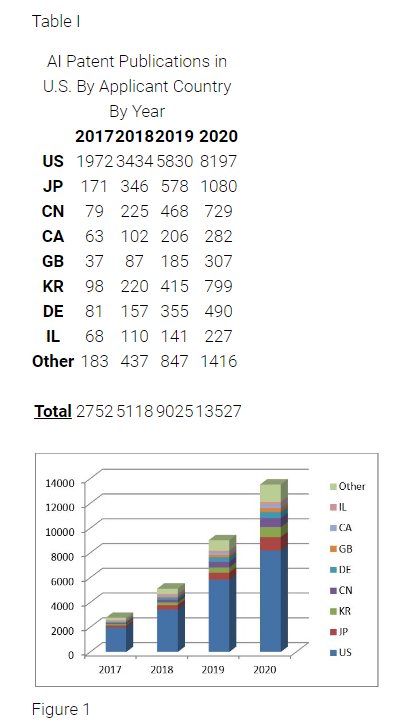 However, during that same time period, the percentage of published applications with a U.S. applicant versus all applicants generally has decreased from 71.7 % to 60.6%. Moreover, the percentage of applicants not from the U.S., Japan, Korea, China, Germany, Great Britain, Canada and Israel (i.e., applicants that were combined as “other” in Table I and Figure 1) increased from 7% to 10% in the same period. Both of those trends show that U.S. applicants are facing competition from an increasingly diverse range of competitors that also have seen the value of seeking patent protection for their AI inventions in a growing number of technological fields. 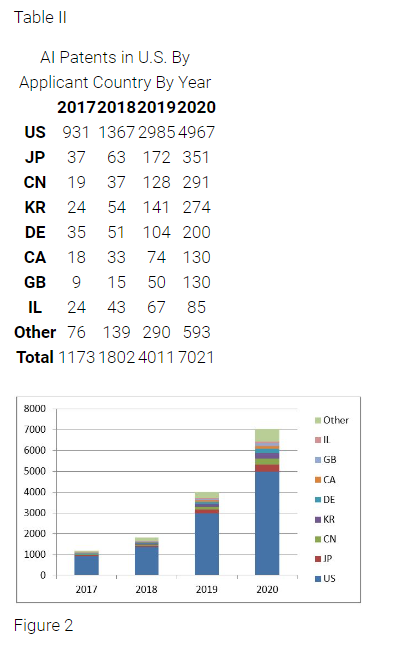 The tremendous growth in AI application filings is further going to be affected by the increasing number of hardware products and readily available AI software libraries that are making AI accessible to a greater portion of the inventing world. Not only do companies like Google now support AI systems in the cloud, a number of AI accelerators (e.g., for performing machine vision processing) also are now available for even single board computers -- many for less than the cost of an undiscounted entity filing a new utility application. The increased availability (and affordability) of AI resources will lead to AI-based innovations in industries that may have steered away from making investments in AI solutions in the past. In general, we predict 2021 will herald in a substantial new wave of AI inventions and patents/applications from all over the globe.