The Federal Government's Unified Agenda of Regulatory and Deregulatory Actions reports on the actions that administrative agencies of the Executive Branch plan to issue in the near and long term. The Unified Agenda is released by the Office of Information and Regulatory Affairs, part of the federal government's Office of management and Budget.

In the federal government's Fiscal Year 2020 (which began on October 1, 2019), the U.S. Alcohol and Tobacco Tax and Trade Bureau (TTB) will continue rulemaking priorities that include finalizing deregulatory rules intended to: (i) reduce the number of reports submitted by certain regulated industry members; and (ii) expand industry flexibility with regard to wine and distilled spirits beverage container sizes (standards of fill). TTB also plans to publish for public comment proposed deregulatory changes in connection with permit applications.

Priority projects also include continuing rulemaking efforts that respond to industry member petitions to authorize new wine treating materials and processes, new grape varietal names for use on labels of wine, and new American Viticultural Areas (AVAs). None of the TTB rulemaking documents to be issued in FY 2020 are expected to be "regulatory actions" under Executive Order 13771 and subsequent OMB guidance.1

In FY 2020, TTB plans to give priority to the following deregulatory and regulatory measures:

Below is a list of TTB's specific administrative rule initiatives and their current status, as well as links to the full text of those rule proposals via the federal government's Office of Information and Regulatory Affairs Website: 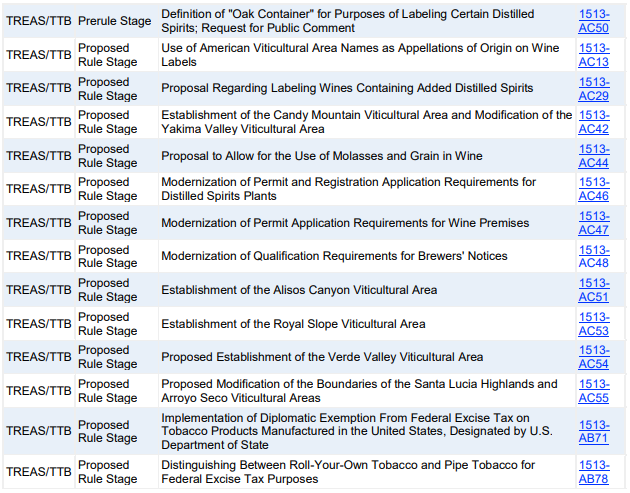 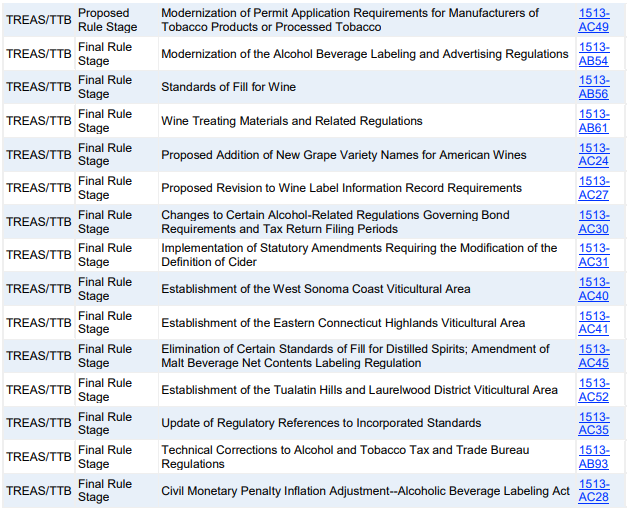