The Irish Minister for Enterprise, Trade and Employment signed into law the European Union (Preventive Restructuring) Regulations 2022 on 29 July 2022. This is the first significant piece of legislation dealing with corporate rescue in Ireland since 1990, when the jurisdiction's examinership process was first codified.

In this article, we will outline some of the more material changes the Regulations make to Ireland's existing legislation.

The Regulations amend Parts 5, 10 and 11 of the Companies Act 2014 (the 2014 Act) and inserts a new Part 5A to transpose the requirements of the Directive which are not already provided for in Irish examinership law.

Regulation 4 places a new statutory fiduciary duty on directors of companies that are insolvent or likely to become insolvent to consider:

While the Irish courts had previously recognised a common law duty for directors to consider the interests of creditors of an insolvent company, the Regulations mark the first time that this has been put on a statutory footing.

Regulation 9 requires examiners dealing with cases involving cross border elements to have the requisite skill and expertise to carry out the role. Prior to the Regulations, an Affidavit of Suitability of the proposed examiner accompanied the petition to the High Court. In circumstances where the Regulations provide no guidance as to the level of experience that is required, it is possible that the practice of filing an Affidavit of Suitability may continue. However, it is likely that the Affidavit will require more detail, including a description of specific cross border experience.

"a test that is satisfied if no dissenting creditor would be worse off under a restructuring plan than such a creditor would be if the normal ranking of liquidation priorities under national law were applied, either in the event of liquidation, whether piecemeal or by sale as a going concern, or in the event of the next-best-alternative scenario if the restructuring plan were not confirmed".

The "best interests of creditors" test must be applied at the beginning and the end of the examinership process. Prior to the Regulations, the Independent Expert Report that accompanied the petition to the High Court had to outline whether the continuation of the undertaking would be more advantageous to the members and creditors as a whole. Now, the test appears to require the independent expert to carry out an assessment of dissenting creditors on an individual basis.

Regulation 14 requires an examiner to ensure that every impaired member or creditor is invited to attend meetings where the proposals for a compromise or scheme of arrangement is being considered. This is a mandatory requirement that was not provided for previously under Irish examinership law. Regulation 17 goes on to further state that the proposals shall not be binding on any member or creditor who was not invited to attend at the meetings convened.

The Regulations introduce the concept of cross-class cramdown to many EU jurisdictions. However, cross-class cramdown has been a feature of the Irish examinership process since it was introduced in 1990. The Regulations don’t alter the fact that only one class of impaired creditors is required to approve any scheme. However, in a significant amendment, those creditors must now be "in the money" creditors. "Out of the money" creditor votes will not count.

Previously, once a company entered examinership in Ireland, it enjoyed an automatic moratorium on enforcement action against it during the protection period. The Regulations have altered this by inserting an express carve out for employee claims. Now, Regulation 11 provides that an employee of a company can seek to commence or advance actions or proceedings against the company. This means that companies in examinership will no longer enjoy complete protection and further that a potential employee claim could unravel the examinership process.

Previously, an examiner had a discretion to certify certain liabilities. Now, Regulation 13 places a mandatory requirement on the examiner to certify those liabilities at the time they are incurred.

Regulation 14 places a 12 month cap on the total duration of the protection period. However, it still remains that the examiner must present his report to the Court within the time already allowed for under Irish examinership law which is currently 150 days.

Comparison with other countries 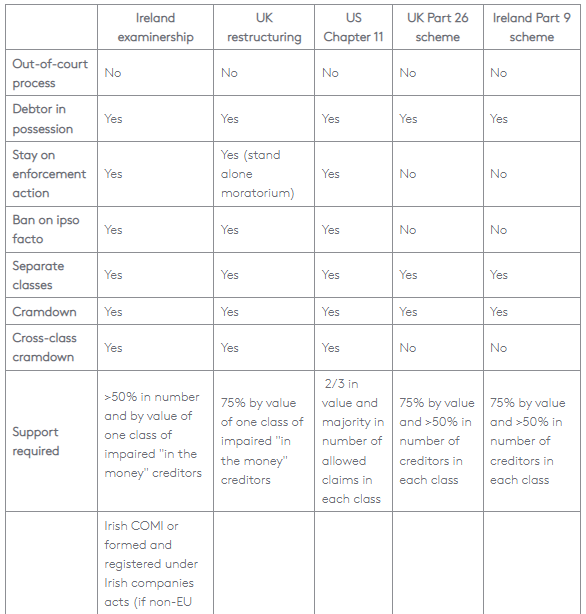 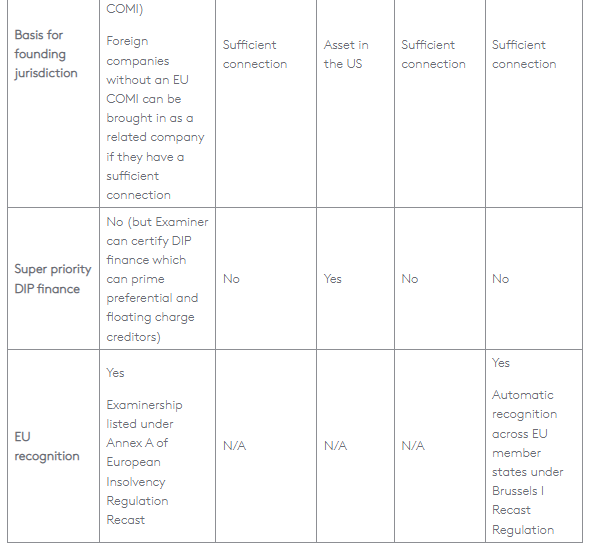 The Regulations don't introduce a new restructuring regime to Ireland, but rather amend legislation which has been in place for the last 30 years. These do include some significant changes that clients and practitioners will need to take note of, and others that will need further clarification from the courts.