Listed companies that renew their corporate bodies starting from 2020 will have to increase from 1/3rd to at least 2/5th the quota of members of the board of directors and of effective members of their board of statutory auditors, elected from the less represented gender. Moreover, by-laws may need to be amended.

The table below provides four examples of the most frequent compositions of boards of directors and the impact of the new rules: 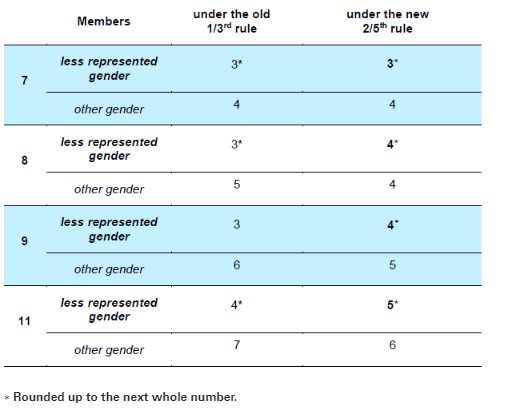 Board of Statutory Auditors

The majority of Italian listed companies has a board composed of 3 effective statutory auditors. Should listed companies apply the new 2/5th gender quota rule to a board composed of 3 members and then proceed with a rounding up of the mathematical result (1.2) to the next whole number (2), the 2/5th quota would create a paradox and be mathematically inapplicable. That said, on 23 January 2020, Consob announced a public consultation in which it proposed to round-down the 2/5th ratio for the corporate bodies composed of 3 members (substantially, only the Board of Statutory Auditors). The public consultation closed on 28 January 2020.

It is our view that the consultation will be favorably accepted by the market given that a different interpretation would require changes in the by-laws in order to increase to 5 the number of effective statutory auditors and cause an unreasonable increase in costs for issuers. Therefore, should Consob's proposal be confirmed, companies would be compliant with the new 2/5th rules by appointing only 1 member out of 3 from the less represented gender (and at least one alternate auditor).

Listed companies will now be required to apply the new mandatory quota for 6 consecutive terms of their corporate bodies.

As an exception, companies that are newly-listed can gradually implement the provisions on gender quota set forth under the 2019 Budget Law, by applying the reduced quota of 1/5th (as opposed to 2/5th) for the first term following trading of their shares on the Italian regulated market.

No changes to the previous sanction regime have been introduced by the new 2/5th rules1.

Upon renewal of the corporate bodies, Italian listed companies will have to increase the quota reserved for the less represented gender from 1/3rd to 2/5th.

Depending on the language currently used, issuers may need to amend their by-laws to reflect the new provisions. Given that a mere change of law is concerned, Board of directors are empowered to directly approve such amendments rather than seeking approval from an ad hoc extraordinary shareholders' meeting.

The application to the board of auditors of the new ratio, together with the round-up principle currently in force, would require companies to increase the members of the board of auditors to five, thus requiring changes in the companies' by-laws with increasing costs. It is therefore our view that companies with a board of statutory auditors composed of 3 effective members can disregard the rounding up principle set by Consob and comply with the new provisions by appointing 1 out of 3 effective members and 1 alternate auditor from the less represented gender. This position is also in line with the Consob consultation.