In this installment, we highlight a recent case filed in the District of New Jersey. On July 1, 2020, Tobii Technology, Inc. sued Lee S. Weinblatt, an individual, seeking declaratory judgment that Tobii does not infringe Weinblatt’s patent, specifically, U.S. Patent No. 7,641,341 (the ’341 patent). This article focuses on the ’341 patent, which claims using saccadic eye motion to indicate the level of interest in visual stimuli. The case is captioned Tobii Tech., Inc. v. Weinblatt, 2:20-cv-08062-BRM-JAD (D.N.J. 2020).

In April 2020, Weinblatt sent a letter to Tobii Technology that claimed Tobii’s products had been infringing, and was continuing to infringe, the ’341 patent. The letter, according to the complaint, included a chart purporting to map each of the ’341 patent’s claims to Tobii’s products. In particular, the complaint alleges that Weinblatt identified, as allegedly infringing products, various Tobii eye-gaze analysis software, including Tobii Pro Lab, Tobii Pro Spectrum, Tobii Pro Fusion, Stim Tracker, Tobii Pro Glasses 2, Tobii Pro TX300, and Tobii Pro VR Integration. The complaint alleges that Weinblatt styled this letter as a “licensing opportunity.” In response, Tobii filed suit, seeking a declaratory judgment of noninfringement. Tobii’s complaint seeks to rebut Weinblatt’s claim chart and provides reasons that Tobii’s products do not infringe. The complaint concludes by asking the Court to find that none of its products infringe, in any way, the ’341 patent; to enjoin Weinblatt from threatening to assert further claims of infringement; and to award costs and reasonable attorneys’ fees.

The ’341 patent is titled “Use of Saccadic Eye Motion to Indicate the Level of Human Interest in Response to Visual Stimuli.” Human eyes make saccadic movements—quick, simultaneous jerking movements of both eyes—to create images of their surroundings. The ’341 patent tracks the number of saccades per second to judge the level of a viewer’s visual interest in stimuli, for example a screen. An oscillation of 50 saccades per second, for example, indicates a higher level of interest than an oscillation of 20 saccades per second. The invention claimed by the ’341 patent takes this information and creates a display, for example a bar graph, that allows the user to determine which areas of the screen register the highest levels of visual interest. The patent includes only one figure, a flowchart that illustrates the patent’s method: 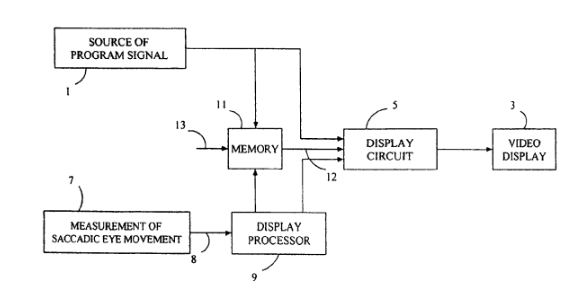 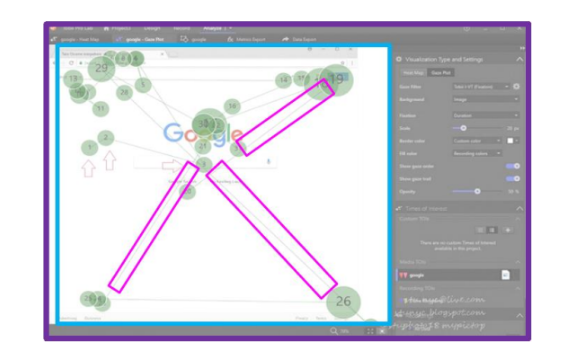 As mentioned above, the complaint alleges that Weinblatt’s letter accused Tobii of infringing the ’341 patent through its suite of products that track viewer interest in stimuli such as webpages. The complaint states that Tobii products, like the “Gaze plot” shown above, do not actively monitor saccadic eye motion of the viewer while the viewer is exposed to stimuli; rather, Tobii products determine saccades from raw gaze data analyzed after collection. Further, the complaint alleges, Tobii products do not produce real-time graphs and other visuals of saccade data. Instead, Tobii products produce “simply a gaze plot” showing areas of interest that does not indicate the number of monitored saccadic eye motions.

If this case doesn’t settle, we may see the defendant answer the complaint, or perhaps move to dismiss the complaint as deficient in some respect. Tobii may take further action against the ’341 patent, including filing a petition for inter partes review challenging the patentability of the patent and claims at issue in this case. We will keep you posted of future developments in this AR/VR litig