Primarily, courts look to the design patent’s figures to determine its scope. Design patent owners received an enhanced weapon for enforcement in the Federal Circuit’s decision in Egyptian Goddess, Inc. v. Swisa, Inc., 543 F.3d 665 (Fed. Cir. 2008), which dropped the “point of novelty” requirement, simplifying the infringement test for design patent infringement to only the “ordinary observer test.” Under this test, a design patent is infringed if the accused article is “substantially the same” as the claimed design in light of the prior art, from the perspective of an ordinary observer (who is a purchaser of the type of goods accused of infringement). Egyptian Goddess, 543 F.3d 665, 670 (Fed. Cir. 1998).

While only a handful of design patents focused on sporting goods have been litigated since this change in the law, those cases are instructive. 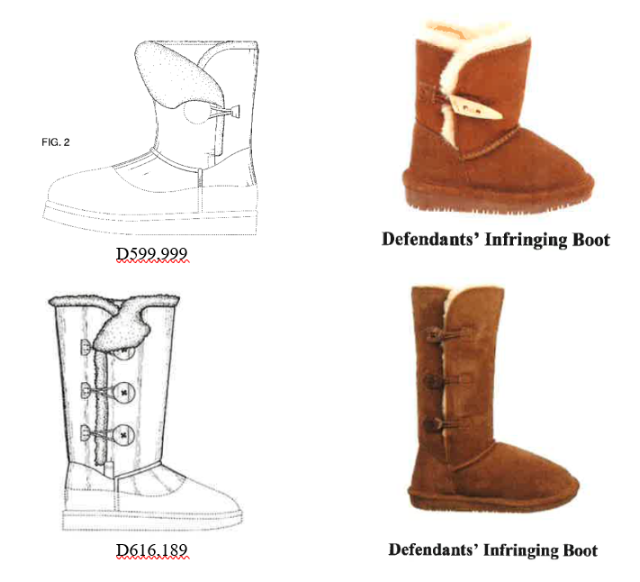 A jury found various one-button and three-button boots manufactured by Romeo to infringe the patents, id. at ¶ 21, and awarded Deckers $5,250,838 in damage. Id., D.I. 281. It is interesting to note that neither of the Romeo products are exactly the same as the Deckers’ patented designs. Nonetheless, the jury found the two Romeo products to be “substantially the same” as the patented designs, presumably in view of the prior art.

Other recent cases highlight the importance of claim construction—the process by which the court determines the scope of the claimed design. In two cases, the litigants settled after claim construction. In Crocs, Inc. v. Effervescent, Inc., Case No. 16-cv-2004 (D. Col. June 27, 2017), the court construed patent number D517,789, which claimed a shoe design (below). At issue was whether the strap should be included in the claim. The court determined that the strap was functional, and thus less important to the overall visual impression of the design. The parties would eventually settle for an undisclosed amount. 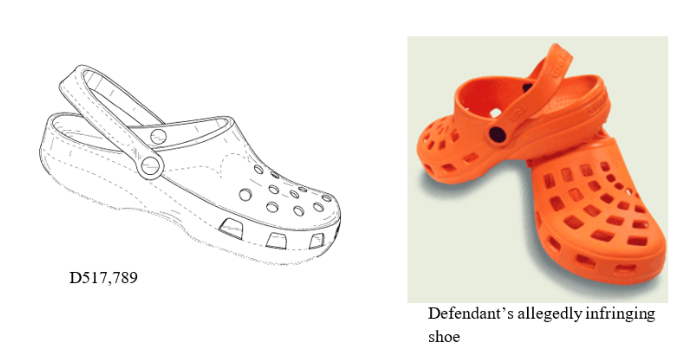 In another case, the court construed three patents covering designs for shoe bottoms in Skechers U.S.A. v. Eliya, Inc., Case No 16-cv-2820 (C.D. Cal. Mar. 14, 2017). The three patents—D655,901 (below left), D682,522 (below center), and D708,430 (below right)—essentially cover three different shoe tread patterns. The court set out to decide if claim construction was necessary and, in doing so, lay out several important design patent claim construction considerations. First, the treads were determined not to be functional because there were several different variations in the designs. Skechers, Case No. 16-cv-2820 at *10. Second, there are not any concomitant utility patents that suggest that the designs might have function. Id. at *12. Third, the patent owner does not advertise the designs as serving a specific utility. Id. at *14. Finally, the court determined that the shoe’s midsole was not dictated by function. Id. at *15. Shortly after the order, the parties would settle. 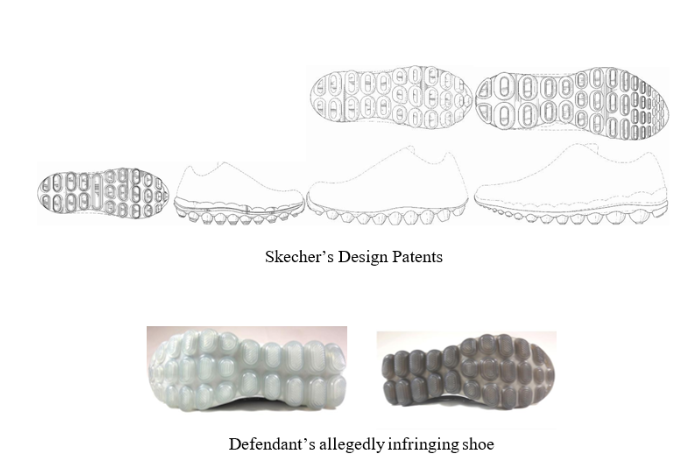 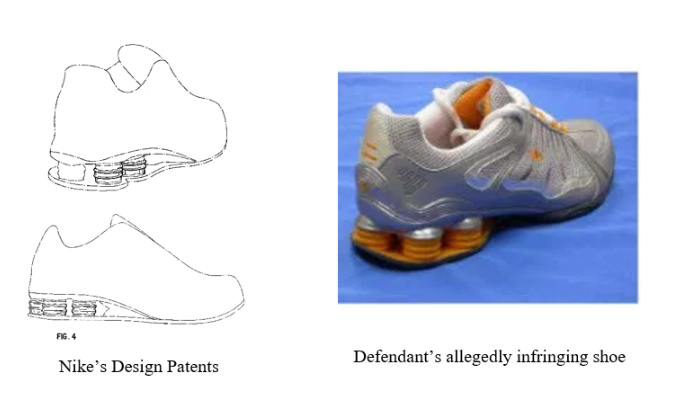 Finally, in Seirus Innovative Accessories, Inc. v. Cabela’s Inc., 827 F. Supp. 2d 1150 (S.D. Cal. 2011), the court adjudicated a motion for summary judgment on non-infringement of a patent covering the ornamental design of a neck protector (below). The court surmised that the patented design did not encompass the allegedly infringing neck gaiter because the patented design had a vertical zipper while the neck gaiter had a diagonal one. Thus, the court granted the defendant’s motion for summary judgment of non-infringement.

Design patents have a lot to offer sporting goods’ manufacturers. Any “new, original and ornamental design” is eligible subject matter for a design patent; a standard that may be less intimidating than that of a utility patent. Depending on the state of the prior designs, even a relatively subtle design may be patentable. An appropriate subject matter for a design patent covers the gamut from shoe treads and uppers to the locations of buttons or zippers. In the sporting goods industry where companies achieve differentiation from their competitors through both technological and design innovation, protecting those design innovations makes good business sense. Design patents can also be quite valuable, as shown through the sizable award in the Deckers case. Thus, sporting goods’ manufacturers should consider design patents as a valuable intellectual property tool to protect their products and strengthen their brand.

Mayer, M. (2005). Stepping in to step out of liability: The proper standard of liability for referees in foreseeable judgment-call situations. DePaul Journal of Sports Law,3(1), 50-102

Wilson, U. S. (2011). The standard of care between coparticipants in mixed martial arts: Why reckless should ‘submit’ to the ordinary negligence standard. Widener Law Journal,20, 375-416.