On 18 June 2018 the Trademark Review and Adjudication Board (TRAB), which is now a subordinate of the reorganised State Intellectual Property Office, released an analysis of its decisions which were overruled by the courts in 2017. In addition to the statistics, the TRAB provided a commentary on issues such as:

Finally, of the 165 retrial verdicts received, the Supreme People's Court overruled the TRAB's decision in 54 cases (32.7%). 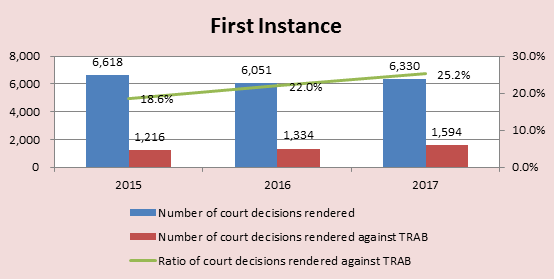 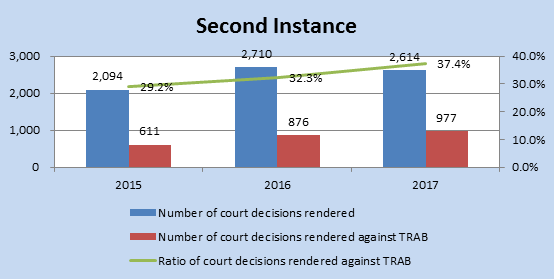 The TRAB's breakdown of the reasons why it lost cases in administrative litigation in 2017 is set out below. 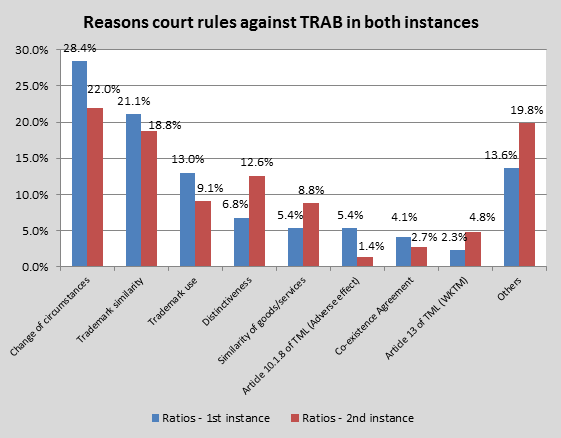 'Others' in Figure 3 covers procedural reasons such as:

The TRAB also provided a comparison of the reasons why it lost cases in the first and second instances in 2016 and 2017. 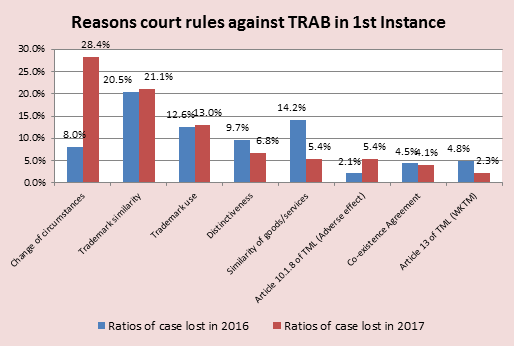 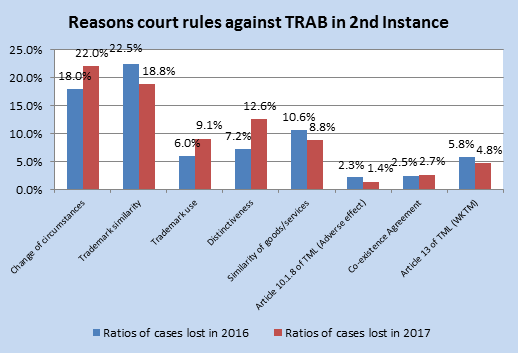 The TRAB noted that a change of circumstances is one of the major reasons why its decisions are overruled by the courts in both instances, as indicated in Figures 4 and 5 above. In 2016 the first-instance cases in which TRAB decisions were overturned due to a change of circumstances accounted for 8% of the total case load. This percentage increased sharply to 28.4% in 2017, as shown in Figure 4.

The TRAB stated that a 'change of circumstances' corresponds to cases in which the China Trademark Office (CTMO) refuses an applied-for mark because of a cited prior mark and the applicant files a review of refusal with the TRAB (while initiating the procedure necessary to eliminate the cited obstacle mark).

In principle, the TRAB does not, "for the sake of efficiency", wait for the affirmation of a cited mark's invalidity; instead, it confirms CTMO refusal decisions. However, the TRAB may suspend its decision where:

The TRAB justifies such practice as follows:

This is a particularly important issue which should be addressed in a future revision of the Trademark Law. The key matter seems to be the concern for efficiency, which raises the question of whether it is more efficient for:

In its analysis, the TRAB stated that where the courts overrule its decisions on issues such as trademark similarity, similarity of goods or services, distinctiveness or trademark use, they often do so on the basis of new evidence submitted during the court proceedings.

The TRAB raised concerns over such practice, as it lowers the efficiency of trademark administrative procedures and results in increased administrative lawsuits and judicial resources being wasted.

The TRAB therefore called on the judiciary to set proper limits around admitting new evidence in litigation procedures or penalise parties that fail to meet their burden of proof. The TRAB explicitly advised the courts to adopt the approach set out in Articles 101(1) and 102(2) of the Interpretation of the Supreme People's Court Concerning the Application of the Civil Procedure Law of the People's Republic of China in ascertaining the admissibility of evidence adduced on the expiry of statutory time limits and the penalties merited by a failure to meet the burden of proof.

It may be difficult to determine whether a litigant abstained, on purpose, to adduce evidence in its own interest. The court's tolerance is therefore understandable. However, this depends on the circumstances. In cases concerning the cancellation of a trademark for non-use, the rules should be strict: if a trademark owner does not adduce any evidence of use at the initial stage of the procedure (some flexibility regarding the length of time to collect evidence can be allowed), the trademark should no longer be cited as an obstacle for the registration of a later trademark or the opposition or any other procedure initiated by such trademark should be dismissed.

In its analysis, the TRAB stated that without explicit provisions in the Trademark Law, it has become an acknowledged understanding that trademark coexistence agreements should be taken into account when assessing trademark similarity. However, the TRAB admitted that the extent to which such an agreement should influence a similarity assessment remains controversial.

The TRAB has held that a prior trademark owner is not entitled to make a declaration of will in consenting to the registration of another trademark. Instead, such owner, in its own interest, may waive its claim against the registration of such other trademark. However, this waiver of its claim will not necessarily lead to the elimination of confusion. The authorities must assess the likelihood of confusion between trademarks. The parties concerned may submit trademark coexistence agreements to convince the authorities that based on the agreed terms, the coexistence and use of the trademarks will not cause confusion among consumers. The authorities will then decide on the merit of the coexistence agreement and other relevant factors. However, where two marks and the goods or services thereof are identical or almost identical, the mere submission of a trademark coexistence agreement proving the prior trademark owner's waiver of its claim against a later mark does not rule out the possibility of confusion.

This issue will no doubt be actively discussed in the course of the Trademark Law's revision. The key issue here concerns the nature of the trademark right. In other jurisdictions, such as the European Union, the registration of a trademark does not constitute the granting by the authorities of a right to use. Rather, a registration confers on the registrant only the right to prevent others from using the trademark. The registrant is therefore entirely responsible for the enforcement or non-enforcement of such right, which is considered to be essentially private. Hence, there is no limitation to coexistence agreements, as the authorities consider that trademark owners are the best judges of their own business interests, which correspond with the public interest in avoiding confusion.

(1) Article 101 of the Interpretation of the Supreme People's Court Concerning the Application of the Civil Procedure Law of the People's Republic of China states as follows:

(2) Article 102 of the Interpretation of the Supreme People's Court Concerning the Application of the Civil Procedure Law of the People's Republic of China states as follows:

Evidence provided by a party beyond the time limit deliberately or due to gross negligence shall be deemed inadmissible by a people's court. But the evidence which is related to the basic facts of the case shall be deemed admissible by the people's court which shall impose an admonition or a fine in accordance with the provisions of Article 65 and paragraph 1, Article 115 of the Civil Procedure Law.

Evidence provided by a party beyond the time limit not deliberately or due to gross negligence shall be deemed admissible by a people's court which shall impose an admonition on the party.

Where a party requests the opposite party to compensate for costs of transportation, accommodation, meals, lost labor, witness presenting at court, and other necessary expenses arising from overdue provision of evidence, a people's court may be supportive.

(3) On 23 December 2016 the SPC found, in the retrial on the review of refusal of the NEXUS mark, that the trademark coexistence agreement that Google had entered into with the registrant of the cited mark NEXUS was admissible and that the applied-for trademark NEXUS, which was designated to be used on "handheld computers and portable computers" was not similar to the cited mark NEXUS, which was used on "computers used on bicycles".