In Decision 4A_248/2019, the Swiss Supreme Court issued a procedural order reversing its prior ruling (rendered on an ex parte basis) in the Semenya case, this time refusing to suspend the application of the IAAF's Regulations for the Female Classification - Athletes with Differences of Sex Development pending the outcome of an appeal. It also refused to temporarily stay the effects of a Court of Arbitration for Sport (CAS) award, which found the regulations lawful. 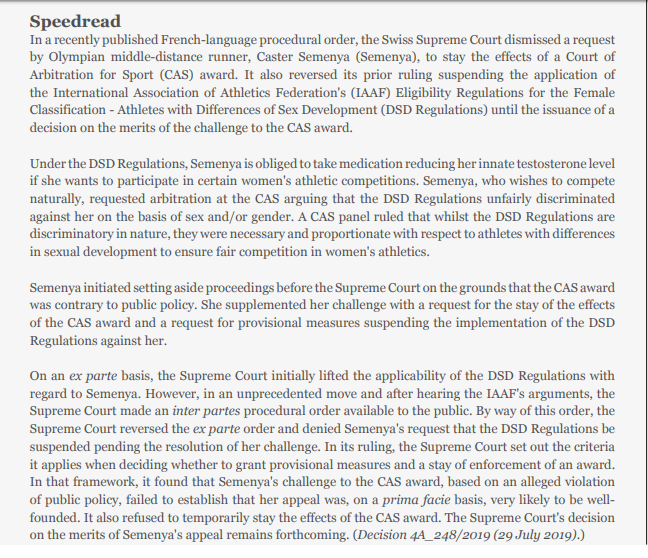 The International Association of Athletics Federation's (IAAF) Eligibility Regulations for the Female Classification - Athletes with Differences of Sex Development (DSD Regulations) establish a number of requirements as to the eligibility of women with certain differences of sex development to participate in certain athletic competitions. The DSD Regulations provide, in their relevant provisions, that:

"1.1(b)(ii) some individuals have congenital conditions that cause atypical development of their chromosomal, gonadal, and/or anatomic sex (known as differences of sex development, or DSDs, and sometimes referred to as 'intersex')."

"1.1(e) These Regulations exist solely to ensure fair and meaningful competition within the female classification, for the benefit of the broad class of female athletes. In no way are they intended as any kind of judgement on or questioning of the sex or the gender identity of any athlete."

Pursuant to Article 2.2(a) of the DSD Regulations, a "Relevant Athlete" is defined as an athlete who meets each of the following criteria:

"Restricted Events" are defined in Article 2.2(b) of the DSD Regulations and refer to events from 400m to the mile; including 400m, hurdles races, 800m, 1500m, one mile races and combined events over the same distances.

Article 2.3 of the DSD Regulations requires any Relevant Athlete to meet the following criteria to be eligible to compete in Restricted Events at an international athletics competition:

"The award may only be annulled:

e. if the award is incompatible with public policy."

Articles 103(1) and (3) of the Swiss Supreme Court Act (SCA), which allow the Supreme Court to suspend the effects of the award under challenge, read as follows:

"1. As a general rule, annulment proceedings do not have suspensive effect.

3.The investigating judge can stay the effects of the award ex officio or upon request."

Article 104 of the SCA, which allows the Supreme Court to order interim measures preserving the status quo until the outcome of the appeal, provides:

"The investigating judge may, ex officio or upon request of a party, order the provisional measures necessary to maintain the status quo or to safeguard threatened interests."

In April 2018, the IAAF introduced the DSD Regulations and announced that they would come into effect on 1 November 2018.

Caster Semenya (Semenya), a two-time Olympic champion runner from South Africa, is a Relevant Athlete under Article 2.2(a) of the DSD Regulations. In order to compete in Restricted Events at international athletic competitions,

Semenya would have to take hormone suppressants to lower her innately occurring high testosterone to below the level set forth in the DSD Regulations, and subsequently maintain her testosterone at that level.

In June 2018, Semenya and Athletics South Africa (ASA) initiated two separate Court of Arbitration for Sport (CAS) arbitration proceedings against the IAAF seeking an award declaring the DSD Regulations to be unlawful and preventing their entry into force. The proceedings were consolidated into a single arbitration reference.

In short, Semenya and ASA argued that the DSD Regulations:

On its part, the IAAF contended that the DSD Regulations:

In the course of the proceedings, the IAAF amended the DSD Regulations, so that the DSDs covered by the Regulations would be limited only to athletes with "46 XY DSD", that is - a condition in which the affected individual has XY chromosomes and no XX chromosomes, and in which the testosterone levels are said to be well into the male range.

The CAS Panel rendered an award on 30 April 2019 rejecting Semenya's and ASA's requests to declare the DSD Regulations unlawful and to prevent their entry into force. Whilst finding that the DSD Regulations were discriminatory, the CAS Panel held that such discrimination was a necessary, reasonable and proportionate means of achieving the legitimate objective of ensuring fair competition in female athletic events and protecting the female category in those events.

Semenya appealed to the Swiss Supreme Court to set aside the CAS award, together with a request (ex parte) for a procedural order suspending the implementation of the DSD Regulations and staying the effects of the CAS award pending the outcome of her appeal. Semenya essentially contended in that context, that the DSD Regulations, insofar as they submit her to unwanted hormonal drug intervention to lower her natural testosterone level, violate substantive public policy under Article 190(2)(e) of the PILA.

On 31 May 2019, the Supreme Court issued an ex parte order, putting on hold the implementation of the DSD Regulations with respect to Semenya pursuant to Articles 103 and 104 of the SCA. This order was confirmed on 12 June 2019, after the IAAF sought the reversal of the order.

Together with its answer to the appeal filed on 25 June 2019, the IAAF requested that the ex parte order be lifted and that the DSD Regulations be imposed on Semenya until the issuance of the Supreme Court's decision on the merits of Semenya's appeal. ASA, on its part, submitted that the suspension of the DSD Regulations should apply to all Relevant Athletes.

The Supreme Court reversed the ex parte order of 31 May 2019 and rejected Semenya's request for provisional measures and for the suspension of the effects of the CAS award pending the outcome of the appeal proceedings. Similarly, the Supreme Court dismissed ASA's request to suspend the implementation of the DSD Regulations to all Relevant Athletes.

The Supreme Court first recalled two points of principle, namely: the criteria it applies in deciding whether to order a stay of the effects of a challenged award and protective measures pursuant to Articles 103 and 104 of the SCA and the definition of public policy under Article 190(2)(e) of the PILA.

With regard to the prerequisites for ordering a stay of enforcement and provisional measures in favour of the appellant, the Supreme Court outlined the following three-pronged test:

As concerns the last criterion above, the Supreme Court underscored that its practice is to grant the stay of the effects of an award and provisional measures, only where a prima facie examination of the case shows that the appeal is "very likely to be well-founded".

Finally, the Supreme Court recalled (obiter) that its role was not that of an appeal court that would review, with full powers, sports-related awards issued by CAS panels.

The Supreme Court then proceeded to assess, on a prima facie basis, the arguments Semenya had invoked in support of her argument that the CAS award was incompatible with public policy, namely:

Semenya had argued that the DSD Regulations run counter to the principle of non-discrimination.

The Supreme Court found it doubtful that the concept of public policy includes the prohibition of discriminative measures when these are taken by a private party and occur in the context of a relationship between two private individuals (here between the IAAF and Semenya). Assuming it would, the Supreme Court also found that the CAS Panel had considered, upon careful consideration of the expert evidence submitted to it, that the eligibility rules introduced by the DSD Regulations created a differentiation based on the legal gender and innate biological characteristics of the Relevant Athletes. However, at the same time the regulations constitute a necessary, reasonable and proportionate means of attaining the integrity of, and ensuring fair competition in, elite female athletics.

In a second strand of her argument, Semenya submitted that the DSD Regulations violate her personality rights and human dignity, which are guaranteed by international instruments.

Recalling its previous case law (see paragraph 2.4 in Decision 4A_178/2014, discussed in Legal update, Swiss Supreme Court addresses legal aid in international arbitration and timing of tribunal's evidentiary rulings, and paragraph 5.3.2 in Decision 4A_370/2007), the Supreme Court held that the European Convention on Human Rights (ECHR) was not directly applicable to arbitration, and that potential breaches of the ECHR did not constitute one of the grounds for appeal listed in Article 190(2) of the PILA. In that context, the Supreme Court found, upon review of the appeal brief, that Semenya's criticisms levelled at the CAS award did not satisfactorily establish that her appeal was very likely to be well-founded on the merits on the basis of an alleged violation of her personality rights and human dignity.

Finally, the Supreme Court noted that it did not manifestly appear that Semenya's situation was similar to that of the Brazilian football player Francelino Matuzalem. In that precedent, the Supreme Court set aside, for violation of public policy, a CAS award threatening Mr Matuzalem with an unlimited ban from exercising his profession if he failed to pay compensation in excess of EUR11 million to a former club (see Decision 138 III 322, discussed in Legal update, Landmark ruling of Swiss Supreme Court setting aside CAS award for violation of substantive public policy).

In light of the foregoing, the Supreme Court, after having heard the IAAF's position, revoked its ex parte order of 31 May 2019 and dismissed Semenya's request for stay of the effects of the CAS award, and interim measures in the form of a suspension of the applicability of the DSD Regulations. For the same reasons, the Supreme Court denied ASA's request that the DSD Regulations be suspended for all Relevant Athletes.

This decision is a very rare example of a published procedural order of the Supreme Court and is of interest for a number of reasons.

First, given that the Supreme Court rarely publishes procedural orders, the case is instructive of the Supreme Court's approach to the conditions for granting a stay of the effects of an award under challenge and provisional measures pending the outcome on the merits of the appeal.

Second, the decision confirms the Swiss Supreme Court's restrictive approach towards a request for a stay of an arbitral award when the jurisdiction of the arbitral tribunal is not challenged. A stay can only be obtained if the appellant demonstrates, prima facie, that the challenge is very likely to be well-founded on the merits, which is a high threshold, particularly when the ground for challenge is an alleged violation of public policy, which is in turn interpreted restrictively. Experience shows that the Supreme Court tends to grant the stay of the award and provisional measures (such as the stay of the underlying arbitration proceedings) more leniently when the appellant invokes a jurisdictional challenge, arguing that the arbitral tribunal wrongly accepted jurisdiction. Indeed, in those situations, the Supreme Court has often considered it more reasonable, in terms of procedural economy, to maintain the existing procedural situation until the issuance of its decision on the merits.

Finally, to date, only one challenge on the ground of substantive public policy has succeeded on the merits (see Decision 138 III 322). This is due to the fact that this ground for appeal is being applied very narrowly in practice. In this context, it does not come as a surprise that the Supreme Court found that Semenya failed to demonstrate that her challenge was very likely to be well-founded. Consequently, while the decision on the merits will be issued in the coming months, it seems improbable that the Supreme Court will ultimately uphold Semenya's challenge to the CAS award.