In a stunning reversal, the case charging Costco with trademark infringement and counterfeiting for selling “Tiffany” engagement rings was sent back for a full jury trial. 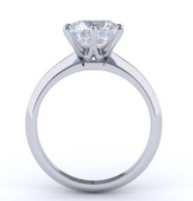 The question of whether no reasonable jury could find against a likelihood of confusion or for fair use in a trademark infringement case is a high standard. The United States Court of Appeals for the Second Circuit held that summary judgement was inappropriate when there was evidence bearing on these issues.

This wiped out a summary judgment of over 21-million-dollars that had been awarded to Tiffany & Co. on its claims of trademark infringement and counterfeiting against Costco Wholesale Corporation for selling diamond engagement rings identified by point-of-sale signs displaying the word “Tiffany.”

Costco had argued that it was using the word in a descriptive and widely recognized way to refer to a style of pronged diamond setting. The district court found that no reasonable jury could find that Costco’s use of the word “Tiffany” was not likely to cause consumer confusion or that Costco was making fair use. The district court awarded Tiffany treble profits, punitive damages, and prejudgment interest.

Costco appealed. The Second Circuit held that questions of material fact should be left to the trier of fact, and that summary judgement deprived Costco of the opportunity to present its case to the jury.

The Court found that Costco had provided evidence that, when taken in the aggregate, would raise issues of material fact regarding three specific factors: (1) actual confusion; (2) Costco’s good faith, and (3) customer sophistication.

The Court also found that there was a triable issue of fact as to whether Costco used “Tiffany” in good faith to refer to a particular pronged diamond setting as distinguished from its source.

While Costco won the appeal, this decision was far from an airtight win. The case has been remanded to the district court so that the parties can present their evidence to a jury. The result after trial may prove that the district court’s judgment was correct.