If you seek to register your graphic design as a trademark for apparel, registration may be refused if your use of the design appears to be merely decorative ornamentation.

Diesel Power Gear, LLC applied to register a bearded skull design as a trademark for items of apparel. 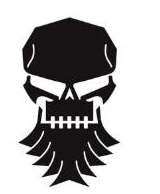 Diesel submitted screenshots of two t-shirts as specimens of use. They showed the mark on the front of the shirts, one as the corner of a modified black & white American flag, and the other having American Flag stripes, stars and colors superimposed on the design with the surrounding words “AMERICAN PROUD” and “Diesel Power.”

The Examining Attorney refused registration on the ground that the design as shown on the specimens did not function as a trademark because it was merely a decorative feature displayed on the front of the shirts and would not be perceived as a source indicator by consumers.

Diesel appealed to the Trademark Trial and Appeal Board (TTAB), which affirmed the refusal of registration. The TTAB noted that there is no per se rule regarding registrability based on the size or location of a mark on clothing. Rather, an ornamentation decision is based on the commercial impression engendered by the mark, taking into consideration the size, location, dominance and significance of the alleged mark as applied to the goods. The TTAB referred to the Trademark Manual of Examining Procedures, which instructs Examining Attorneys to consider the following four factors:

In this case, the TTAB agreed with the Examining Attorney that the size, location, dominance and significance of the bearded skull design were such that it was likely to be perceived as part of the “thematic whole” of the t-shirts. Diesel had not presented supporting evidence that consumers have been conditioned to recognize such a display as a trademark, or that this design had been used with or registered with other goods or services. Although the bearded skull design was found to be inherently distinctive as a trademark for shirts, Diesel was found to have failed to make a trademark use of the design on apparel.

In re Diesel Power Gear, LLC, Application No. 87261073 (February 27, 2019). This decision rejected the application as to Class 25 only. The application also claimed an intention to use the design as a trademark for vehicle accessories in Classes 12 and 27. A decision on those classes will await examination of the way the mark may appear on specimens for the goods in those classes.

Author’s Note: The applicant could have taken steps to make trademark use of this inherently distinctive design for apparel. For example, this design could appear in a more traditional place on a neck label, a hangtag, packaging or even as a small logo on the breast area of the t-shirts. If this design had been registered as a mark for some related goods, such as jewelry or cosmetics, its use in a large size on the front of the t-shirts might have been deemed to be recognizable as a trademark, although it would have been more clearly a trademark use if it were not incorporated into other design features on the front of the t-shirts.