We thought it might be helpful to give some statistics for various subsamples covering different periods so that you could get an idea of how, if at all, antitrust reverse terminations fees are varying over time.

The most recent subsample covers the four-year period from January 1, 2015, through June 30, 2019. This subsample covered 356 transactions, of which 74, or about 20.8%, had antitrust reverse termination fees. The fees in this sample had a mean of 4.7%, 0.5 percentage points less than the 5.2% of the full sample, and a median of 4.4%, the same as the full sample. The relative convergence of the mean and the median is consistent with a tighter distribution of the fees, which ranged from a low of 0.6% to a high of 12.5%.

The charts below gives the frequency of antitrust reverse breakup fees across the four-year-plus subsample set. 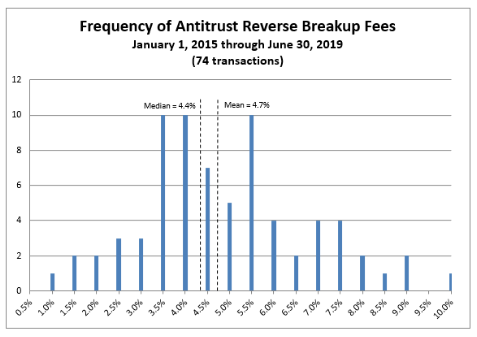 Of the 74 transactions signed since January 1, 2015, with an antitrust reverse termination fee, the antitrust reviews have been completed for 65 transactions. Of the transactions for which reviews have been completed, 50, or about 77%, were cleared without any antitrust challenge. Three transactions (Staples/Office Depot, Aetna/Humana, and Anthem/Cigna) were terminated after the reviewing agency obtained a preliminary injunction in federal district court, one transaction (Walgreens Boots/Rite Aid) was abandoned in the face of agency opposition, nine transactions closed subject to a DOJ or FTC consent order, one subject to a Public Utilities Commission order, and one transaction (AT&T/Time Warner) defeated an Antitrust Division preliminary injunction challenge and closed (the DOJ has appealed).