Can you trademark the shape of a wine bottle?

The average consumer may think that the bottles of their favourite wines come in standard shapes that are free to all producers to use. However, bottle shapes can be protected as trademarks, so long as they meet the necessary requirements, as Marion Pignot explains.

Our supermarket shelves may not always reflect it, but there are actually hundreds of different wine bottle shapes, from tall and thin to short and stout, and everything in between. Most, if not all, of those shapes have a story behind them, and their choice can reveal a lot about a wine’s provenance and heritage.

European regulations stipulate that figurative signs, such as the shape of a product or its packaging, are protectable as trademarks. To succeed, however, such registrations must meet the requirement of distinctiveness, that is to say that they must not be of a generic or usual design. As important, the shape must not result from the nature or function of the product, be necessary to obtain a technical result, or give substantial value to the goods.

In this context, protecting the shape of a wine bottle is not always easy, especially if it could be argued that the choice of shape is dictated by function and, therefore, devoid of distinctive character.

The question of whether a bottle should be eligible for protection was brought before the EU’s General Court this May, following a dispute in the Italian courts between Vinicola Tombacco and Bottega. Bottega is known for its decorative gold bottle (pictured below ), and is the owner of a 3D mark protecting the bottle’s shape, along with its additional characteristics of the colour gold, the letter B and ‘flame’ design element. 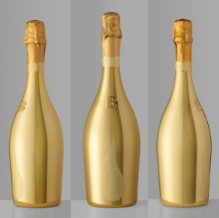 The validity of that 3D mark was challenged by Vinicola Tombacco in March 2016 when it brought an action for cancellation on the grounds that:

On 22 March 2017, EUIPO’s Cancellation Division found that the grounds for invalidity were not admissible, due to the additional distinctive features in the contested mark. In its view, those additional elements resulted in an overall impression that was sufficient to confer distinctive character.

An indication that you should register more than a shape?

EUIPO’s Board of Appeal went on to confirm the findings of the Cancellation Division on 14 March 2018. It also found that the mark enjoyed a presumption of validity from the date of registration, and that it was incumbent on Vinicola Tombacco, therefore, to produce evidence to support its arguments, which it had not done.

Of particular note, the Board of Appeal discussed that the products protected by the registered mark were not bottles as such, but drinks. It found that, as liquids, these could not have a shape imposed by the nature of the product, as they could be packaged in containers whose shape could vary. Finally, the Board of Appeal considered that the shape of the bottle and its golden colouring did not confer, either separately or jointly, a substantial value on the products (a grounds for exclusion).

Vinicola Tombacco appealed the ruling to the EU’s General Court, which ruled against it on 8 May 2019. In essence, the Court reiterated the points raised by the earlier decisions, including that:

It follows from the above that the shape of a bottle, applied to beverages and not containers, can take on a distinctive character even when the bottle is commonly used in the wine sector. As important, the restrictive criteria imposed by trademark law on shapes of ‘substantial value’ and ‘technical result’ do not apply to other ‘non-traditional’ signs, such as colour. This is good news for other wine producers and retailers looking to protect their innovations.