Details of the enhancements to the OFC regime

Under the current regime, custodians for both public and private OFCs are required to meet the same eligibility requirements as for custodians of SFC-authorised funds. In other words, OFC custodians must currently either be (i) a Hong Kong or overseas bank (or a trust company which is a subsidiary of a Hong Kong or overseas bank); or (ii) a trustee of a registered scheme under the Mandatory Provident Fund Schemes Ordinance.

Many industry players have called out for greater flexibility on custodian eligibility requirements, noting that it is common to have other local or overseas service providers, including prime brokers to hold assets for private funds. In addition, comparable jurisdictions such as Singapore allow broker-dealers to act as custodians for private variable capital companies if they hold the relevant licence.

Taking into account industry feedback, the SFC confirms that intermediaries licensed or registered for Type 1 (dealing in securities) regulated activities may act as custodians for private OFCs provided the following requirements are met: 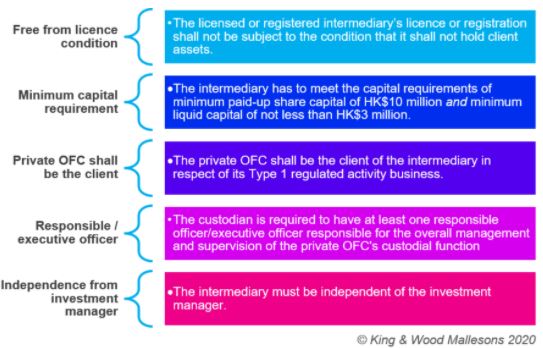 Although the eligibility threshold for private OFC custodians is lowered significantly, the proposed custodian should take note that the SFC requires the custodian to be compliant with all of SFC's regulations, codes and related guidance applicable to OFC custodians, including the newly added Appendix A of the OFC Code[4] which further elaborates on the obligations of OFC custodians, including requirements regarding dealings with client money and client securities and the keeping of records.

Currently, private OFCs must invest at least 90% of their gross asset value in securities and futures contracts and/or cash, bank deposits, certificates of deposit, foreign currencies and foreign exchange contracts (SFO Assets). Investments in other non-SFO Assets classes are subject to a 10% “de minimis” investment limit. These investment restrictions applicable to private OFCs will now be removed altogether, so as to put private OFCs on a level playing field with other overseas corporate fund structures (including the Irish Collective Asset-management Vehicle in Ireland, the Open-ended Investment Company in the United Kingdom and the Variable Capital Company in Singapore), as well as the Limited Partnership Fund (LPF) in Hong Kong.

The SFC has also introduced new provisions in the OFC Code to require that investment managers and custodians have sufficient expertise and experience in managing and safekeeping asset classes in which an OFC invests, including requiring enhanced risk disclosure in the fund offering documents in respect of different type and nature of assets.

The existing OFC regime does not provide for OFC re-domiciliation. As such, corporate funds incorporated overseas could only “re-domicile” by way of other means including asset transfer or share swaps which would trigger associated tax obligations. By contrast, other jurisdictions have established statutory re-domiciliation mechanisms for both conventional companies and corporate funds, and ancillary tax legislation.

The Consultation Conclusion introduces a statutory re-domiciliation regime which allows offshore corporate funds to migrate to Hong Kong while maintaining their corporate identity, continuity and track record without having to establish a completely new legal entity. It is also confirmed that no stamp duty will arise as there will be no change in the legal personality of the corporate fund, and as such there will be no “transfer” of assets from one legal person to another when the fund migrates to Hong Kong using the OFC structure.

The “onshorisation” of funds has become more popular these days, due to various factors including investor preferences, perceptions around use of traditional offshore centres, the increasing need for transparency, and economic substance requirements being introduced by traditional offshore fund jurisdictions. The possibility of re-domiciliation of corporate funds will allow the OFC regime to be on par with other jurisdictions, and increase the competitiveness and attractiveness of Hong Kong as a fund domicile jurisdiction.

There is currently no prescribed AML/CTF obligation imposed on OFCs, and the investment manager of each OFC is expected to carry out the relevant AML/CTF measures.

The SFC Consultation Paper proposes to require all retail and private OFCs to keep a register of significant controllers (SCR) similar to the requirement under the Companies Ordinance for all other conventional companies, so as to enhance the transparency of corporate beneficial ownership of OFCs.

However, the SFC acknowledges the difficulties which would arise from requiring OFCs to keep an SCR given its open-ended nature. In particular, the investors in a public OFC are constantly changing due to the frequent subscription and redemption of shares feature of retail funds. Accordingly, the SFC proposes to require OFCs to appoint a responsible person (being an authorised institution, a licensed corporation, an accounting professional or a legal professional) to carry out AML/CTF functions as stipulated under Schedule 2 to the Anti-Money Laundering and Counter-Terrorist Financing Ordinance (Cap. 615 of Laws of Hong Kong), to further align with the LPF regime. The SFC is conducting a further consultation in this respect.

The SFC proposes the following timeline for the proposed enhancements: 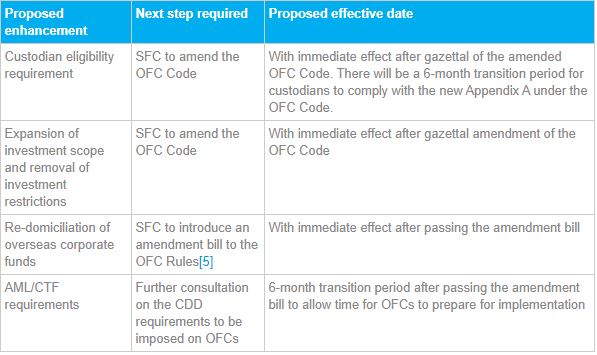