The Fair Trading Amendment Bill passed its third reading on 10 August 2021 and is about to become law. It extends the unfair contract terms regime to standard form small trade contracts, and introduces a new prohibition on unconscionable conduct as well as some changes to uninvited direct sales. We expect the bill to receive Royal Assent next week. This means the provisions will come in to force in mid-August 2022, giving businesses a year to get ready for the changes.

The provisions remain largely the same as in our last updates here and here.

What should you be doing?

Our recommendations for the steps your business should be taking are:

Step One: Identify the standard form business-to-business contracts that your business uses

The test for whether a contract is standard form is based on whether the contract has been subject to effective negotiation between the parties (eg whether it is a 'take it or leave it' contract). It is worth emphasising that the legislation could apply not only to standard terms and conditions or terms of trade that you put in place with your business customers but also any standard terms that you make your suppliers sign up to.

Step Two: Assess whether your trading relationships with the likely counterparties to the contracts fall under the $250,000 annual threshold

If you use standard terms that apply to business customers or suppliers who fall both above and below the annual value threshold, you will need to consider whether to have separate terms for small trade contracts or update your terms to apply to all customers/suppliers.

To determine whether a contract forms part of a 'trading relationship', the Bill as introduced required an assessment of related party contracts in considering whether the threshold was met. However, this was removed through a Supplementary Order Paper, which will make the assessment of the relationship more straightforward in some cases.

Step Three: Seek legal review of the terms to assess whether they may include unfair contract terms

A term may be unfair if it would cause a significant imbalance in the parties' rights and obligations arising under the contract; is not reasonably necessary in order to protect the legitimate interests of the party who would be advantaged by the term; and would cause detriment (whether financial or otherwise) to a party if it were applied, enforced, or relied on.

It is important to review the contract as a whole, as well as the transparency of a term, to determine whether a term is unfair. Examples of terms that may be unfair include:

It is also worth considering whether you want to only amend the clauses most likely to fall foul of the legislation or use the opportunity to more generally update your terms (for example, to make them more palatable and/or easy to understand and apply).

Examples from across the ditch

Cases from Australia (which has a similar prohibition on unfair contract terms in some business to business contracts) provide an indication of the types of terms that could also raise issues in New Zealand. Examples include: 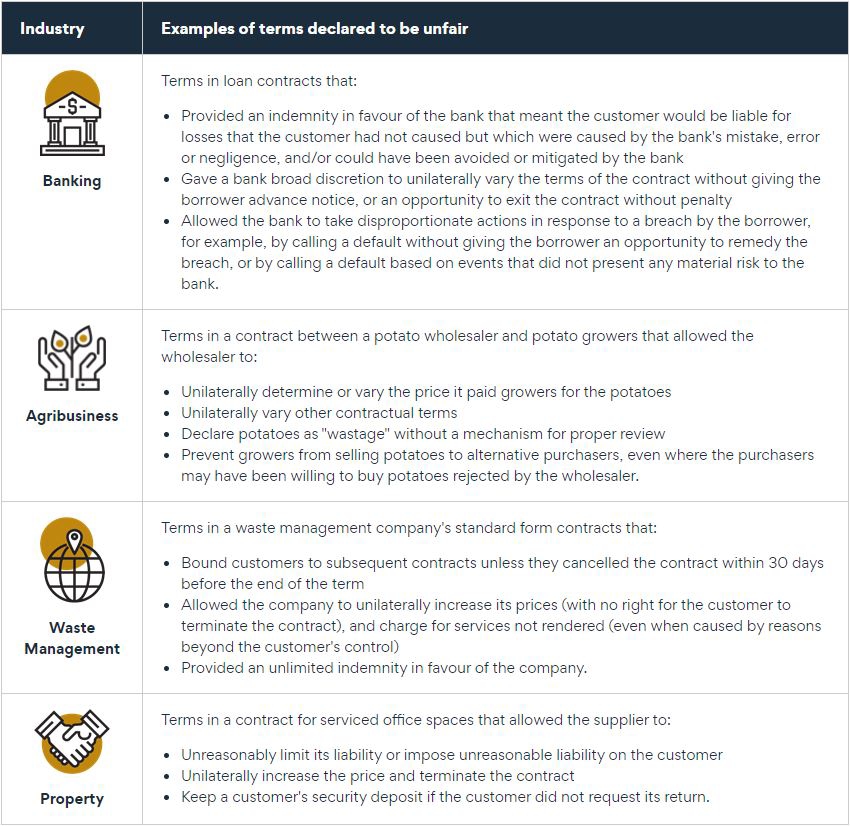 More recently, the Australian Competition and Consumer Commission (ACCC) has taken proceedings in respect of terms used in contracts by a supplier of printing goods and services. There has not yet been a decision in the case, but terms that the ACCC has alleged are unfair include some of the types of terms outlined above, as well as:

There have also been a number of instances where Australian regulators have raised concerns about certain terms with specific businesses and industries, and businesses have amended their terms in response. We expect that a similar approach will be taken in New Zealand.

Other changes to be aware of