Detailed Analysis of Express Entry - What Are My Chances?

Prospective applicants express interest in permanent residence by submitting a profile in the Express Entry pool. They are assigned a Comprehensive Ranking System (CRS) score based on age, education level, knowledge of an official language and work experience. Additional points may be awarded for Canadian education, having a Canadian sibling, a qualified offer of arranged employment or provincial nomination. Periodically, Immigration, Refugees and Citizenship Canada (IRCC) invites candidates with the highest scores to apply for permanent residence. If invited, candidates then have 60 days to submit a complete application. Once an application has been submitted, IRCC has communicated that it intends to finalize the application within 6 months. 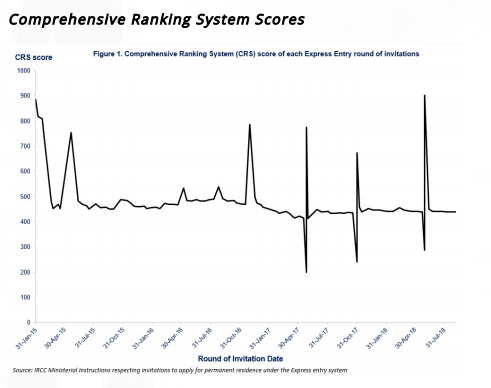 Figure 1 illustrates the CRS scores for each round of invitation. When Express Entry was initially implemented, the first invitations were issued to candidates who scored 886 or higher. The next several rounds continued to see high CRS scores. By March 2015, the scores dropped below 500 and have typically remained below this level, except for a few rounds and Provincial Nominee Program (PNP) specific rounds of invitations. Because a nomination certificate is worth 600 points, PNP rounds of invitations tend to reflect high CRS scores. The peaks on Figure 1 are from PNP specific draws.

Skilled Trades Program candidates tend to score lower CRS points due to their lower levels of education and lower language skills. IRCC has conducted program specific draws for the Federal Skilled Trades program to give these candidates an opportunity to apply. The valleys in Figure 1 reflect the program specific draws for this category of immigration.

Overall, the CRS scores have been hovering around 440-450 since 2017. The last general round of invitations on September 5, 2018, went to candidates who had Comprehensive Ranking System (CRS) scores of 440 or higher. Since the program was implemented, scores have ranged from a high of 886 to a low of 413.

The Composition of the Express Entry Pool

The Express Entry pool continually changes depending on the profile of candidates entering and leaving the pool at any given time. IRCC determines the number of invitations to issue in each round and only the highest ranked candidates are invited to apply. If there is a tie in the CRS score, the system will sort the tied candidates based on the date and time of the profile submission.

Figure 2 shows that the composition of the pool as of August 30, 2018, contained about 89,000 candidates. Among these candidates, about three quarters (66%) have current CRS scores of 400 or lower. Based on historical selection patterns, these candidates have a very low probability of being invited to apply as a Skilled Worker or in the Canadian Experience Class.

There were about 19,800 candidates in the pool with CRS scores of between 401 and 430. These candidates may have a chance at selection if invitations are extended to those whose CRS scores are below 440. The lowest CRS ranking ever in Express Entry went to candidates who had scores of 413 back in May 2017. From August to October 2017, candidates with scores in the 430s were invited to apply but CRS scores have not been below 440 so far in 2018. Though unlikely that they would receive an invitation to apply as a skilled worker or in the Canadian Experience Class, there may be an opportunity for a provincial nomination invitation if eligible. 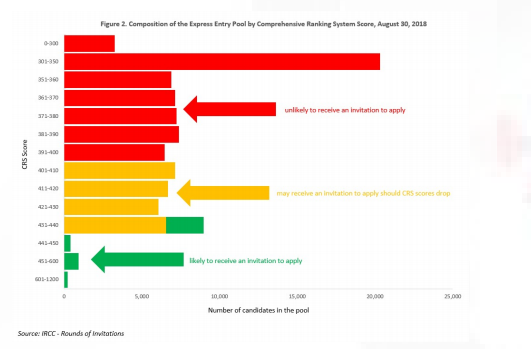 Rounds of invitations between January and August 2018 have been given to between 2,750 and 3,750 candidates with the highest CRS scores. The latest round of invitations on September 5, 2018, went to 3,900 candidates, the highest number of invitations issued since April 2017. So far in 2018, 58,600 invitations have been extended. Once an invitation is extended, candidates have 60 days to submit their supporting documentation including identity documents, proof of education, proof of employment and work experience, language test reports, police checks and medical exams. Upon submission of a completed application, IRCC has communicated that it intends to process the permanent residence application within six months. 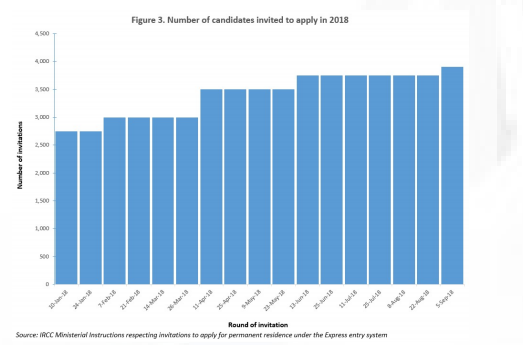 According to the Annual Report to Parliament on Immigration, IRCC’s target is to land 74,900 new immigrants from the Express Entry system in 2018.[1] Preliminary estimates for 2018 show that about 61,710 new immigrants have been landed from the Express Entry system as of July 30, 2018.[2] In order for IRCC to meet the 2018 target, about 13,000 more new immigrants will have land by the end of the year. It must be noted that those who landed in 2018 as permanent residents were not necessarily invited to apply in 2018, but their applications were finalized, and they entered Canada as permanent residents sometime in 2018.

For the department to meet the 2018 target levels, we may see that in the remaining months of 2018, the number of invitations issued in each round will remain high. It may also mean decreased processing times as the department makes a year-end push to meet their landing targets.

The top three provinces of destination for newcomers who landed under the Express Entry system in 2018 were Ontario (65%), British Columbia (18%) and Alberta (8%). 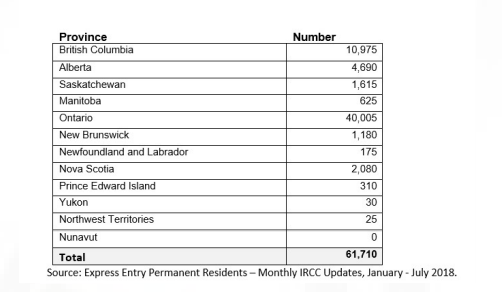 There were about 11,400 Provincial Nominee applicants who landed so far in 2018. Provincial Nominee applicants represented the largest share of those who landed in Atlantic Canada. Among those who indicated Prince Edward Island, Nova Scotia or New Brunswick as their intended province of destination, 80% applied through the PNP program. This data demonstrates that provincial nominations may be effective in attracting permanent residents to smaller provinces.

The Express Entry numbers show that most individuals in the pool are unlikely to receive an invitation to apply. The system favours candidates that are young, have high levels of education, fluency English or French and possess Canadian work experience.

The cut off for invitations has remained steady at 440 and given the current composition of the pool, this cut off is unlikely to decrease. The number of invitations issues continues to rise and is likely to continue to rise as the department tries to meet their admission commitments.

Most newcomers were destined to Ontario and British Columbia with India being the number one source country for new permanent residents in 2018. The changing patterns of economic immigration mean that new immigrants may be better able to integrate and adapt to the Canadian labour market and establish themselves economically in the first few years of settlement. The demographic patterns are consistent with the growing diversity in Canada.

To view all formatting for this article (eg, tables, footnotes), please access the original here.
Green and Spiegel - Kelly Goldthorpe
Back Forward