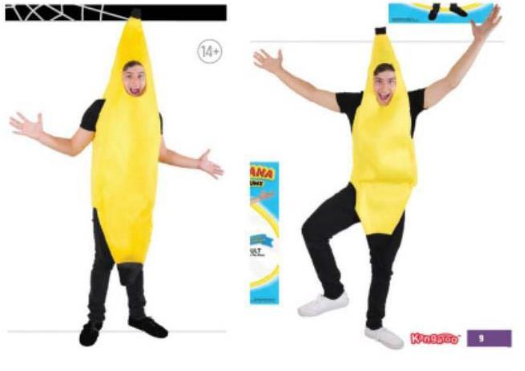 The court began by analyzing whether Rasta’s banana costume was copyrightable. Because the costume was a “useful article,” i.e., it has an intrinsic utilitarian function that is not merely to portray the appearance of the article or to convey information, the court considered whether any non-utilitarian features of the banana costume were copyrightable under the reasoning of the Star Athletica case. First, the court determined that the sculptural features of the costume (e.g., the costume’s combination of colors, lines, shape, and length) were separable from the useful article itself. Kangaroo unsuccessfully argued that each feature should be analyzed individually and that each individual feature was too utilitarian or unoriginal. The court declined to follow this “divide-and-conquer” approach, and instead focused on “the sum of [the banana’s] non-utilitarian parts,” which were copyrightable.

Kangaroo also tried to invoke the doctrines of merger and scenes a faire in its defense. These doctrines target the same concept: whether copyrighting the banana costume would effectively monopolize the underlying idea of a banana. Because ideas are not copyrightable, protection should be denied when a work’s underlying idea can only be expressed very limited ways, i.e., the idea and the expression of it “merge.” Under the doctrine of scenes a faire, elements that are “standard, stock, or common to a particular topic,” or that “follow from a common theme or setting” are excluded from copyright protection. The merger doctrine did not apply in this case because there are many ways to depict a banana costume. Scenes a faire was similarly inapplicable because Kangaroo could not point to a specific feature that necessarily resulted from the fact that the subject matter was a banana. Although a banana costume might be yellow, it could be any shade of yellow (or green or brown, depending on the banana’s ripeness). The banana costume also did not require a black tip like Rasta’s and did not have to be curved in the exact same way. Thus, because the sculptural elements of Rasta’s banana costume were copyrightable under the logic of Star Athletica, Rasta was entitled to the preliminary injunction granted by the district court.