Since 2014, the USPTO has issued several iterations of practical guidance for evaluating subject matter eligibility, leaving patentees and US patent examiners grappling with inconsistent application of the test for patent eligibility. So does the most recent iteration issued on 7 January 2019 provide grounds for more consistency?

We have previously reported on US and Australian court cases which have altered the state of play with respect to the determination of patent eligibility in these jurisdictions.

Briefly, in Mayo[1] the plaintiff Prometheus Laboratories, a specialty pharmaceutical and diagnostics company, had patented a suite of tests for assessing the correct dosages of certain Crohn’s disease medications. When Mayo Clinic developed its own similar tests and began using them, Prometheus sued Mayo for infringement. The US Supreme Court invalidated Prometheus’ methods patent and provided the framework for determining patent eligibility into two parts. In 2014, the US Supreme Court went on to clarify Mayo in Alice Corp. v. CLS Bank International[2] which resulted in the Alice/Mayo test outlined below.

It has been reported[3] that for medical diagnostic patent applications, the 35 U.S.C. § 101 subject matter eligibility rejection rate grew from 7% to 32% in the month after the Mayo decision and continued to climb to a high of 64% (July 2015) of office actions including a § 101 subject matter rejection and to 78% (March 2016) among final office actions just prior to abandonment.

Since the Alice decision the USPTO has issued several iterations of practical guidance for evaluating subject matter eligibility. Throughout this period, concerns have been expressed that different examiners within and between technology centres have applied inconsistent standards due to a lack of clarity in how the ‘judicial exception’ to subject matter eligibility should be applied. This has created a challenging environment for inventors and companies trying to reliably predict the outcomes of patent examination. The demand for clarity and consistency has led to the latest ‘Revised Patent Subject Matter Eligibility Guidance’, announced by USPTO Director Andrei Iancu last week.

The newly issued 2019 Guidance details how the revised patent examination procedures more accurately and consistently identify claims that recite a ‘practical application of a judicial exception’, thereby increasing predictability and consistency in the patent eligibility analysis.

Under the old guidelines, the subject matter eligibility was assessed based on the Alice/Mayo test as demonstrated in the flowchart below. 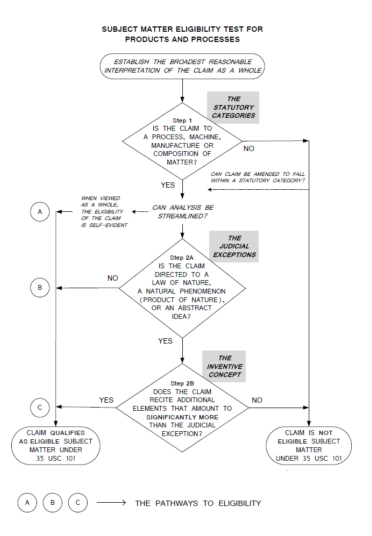 Much of the inconsistency has been generated at Step 2A, particularly through the interpretation of the term ‘directed to’. Decisions of the US Federal Circuit have provided guidance as to the meaning of the term, but US examiners have developed their own interpretation of this guidance and how subject matter should be evaluated. The revised patent examination procedures are ‘designed to more accurately and consistently identify claims that recite a practical application’, providing a more definite approach to claim analysis.

At Step 2B, understanding and overcoming the threshold of what constitutes ‘significantly more than the judicial exception’ is another headache in itself. Practitioners typically battle through several rounds of prosecution arguing this point, increasing costs for clients, who are at risk of obtaining patents with claims having reduced commercial value.

What are the changes?

Under the 2019 Guidance, US examiners will be applying two changes when evaluating whether a claim is patent eligible:

What does a ‘practical application’ actually mean?

We anticipate this will be the hinging point for many arguments during US prosecution; convincing the examiner the claim incorporates ‘a meaningful limit’.

Examiners have been instructed that the revised Step 2A protocol specifically excludes consideration of whether the additional elements represent well-understood, routine, conventional activity. Instead, analysis of well-understood, routine, conventional activity is done in Step 2B. Accordingly, in revised Step 2A, examiners should ensure they give weight to all additional elements – whether or not they are conventional – when evaluating whether a judicial exception has been integrated into a practical application.

Step 2A has proven to be a sticking point in many patent applications directed to diagnostics where, for example, a claim has been deemed patent ineligible due to the alleged ‘routine’ use of PCR or immunoassays.

Furthermore, many diagnostic patent applications are rejected for subject matter ineligibility due to the claims being directed to a ‘natural phenomenon’, a separate consideration to that of whether the subject matter is an ‘abstract idea’. The application of these changes – specifically the requirement to ‘impose a meaningful limit’ on the exception – and the instruction to review the claim as a whole (with the additional elements), may lead to broader claims being allowed than those currently, although the ‘natural phenomenon’ exception will still need to be addressed.

What effect will the changes have for diagnostics?

The 2019 Guidance is just that, a set of guidelines, with no changes enacted to the law. However, one may take an optimistic view that the new changes will do what they have been put there to do – provide consistency and clarity to what was essentially a roll of the dice in the approach a US examiner might take in claim interpretation, especially in the area of diagnostics.

Even with the new Guidance, diagnostic companies should still consider other avenues of protection. The use of trade secrets may be the most attractive commercial alternative to risking disclosure of an invention and an impenetrable subject matter eligibility rejection.

Overall, the new Guidance largely appears to be a step in the right direction by providing clearer and more determinate instructions as to what is patent eligible subject matter in the US.