With another busy year for employment law legislation throughout New York State and New York City coming to a close, New York employers should be aware of new employment laws that will take effect in 2020, as well as laws that already took effect in 2019, to ensure compliance with changing obligations.

On December 31, 2019, hospitality employers with service employees or food service workers will see an increase in the tip credit that can be taken against an employee’s minimum hourly wage, provided that the weekly average of tips at least equals a specified hourly tip threshold (for service employees only) and the total of tips received plus wages equals or exceeds the basic minimum wage, as follows: 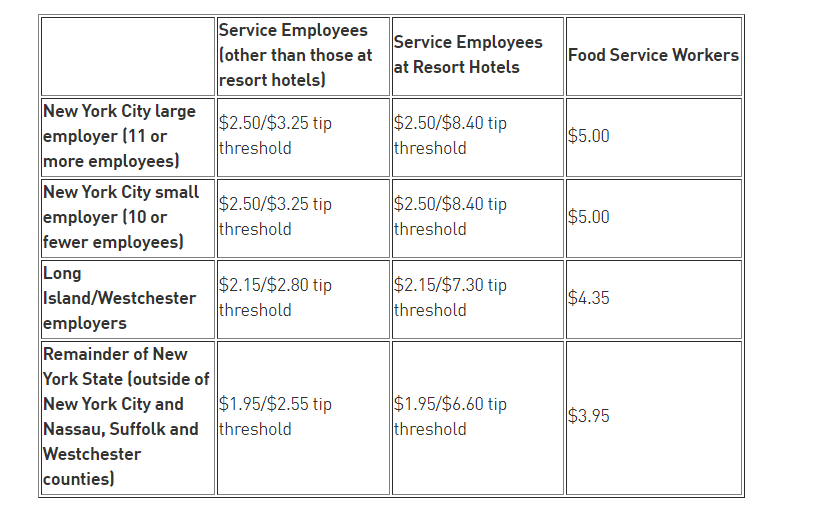 New York’s Paid Family Leave law, which provides job-protected leave to care for a family member with a serious health condition, to bond with a child during the first year after the child’s birth, for adoption or foster care placement, or for any qualified exigency arising from a family member’s call to active military service, has been phasing in its benefits annually since January 1, 2018. As of January 1, 2020, the number of weeks of paid, job-protected leave for eligible employees will remain at 10 weeks, but the wage replacement benefits will increase to 60% of the employee’s average weekly wage, up to a cap of 55 percent of the state Average Weekly Wage. The maximum weekly benefit will be $840.70. Further details about Paid Family Leave are available here.

On August 12, 2019, Governor Cuomo signed a bill aimed at strengthening and reforming the state’s anti-harassment and anti-discrimination laws, building on the expansive sexual harassment laws enacted in 2018. The 2019 laws contain significant new obligations for private employers, many of which already took effect and some of which will become effective in 2020, such as:

A more in-depth look at this sweeping legislation can be found here.

Additionally, effective January 6, 2020, all New York employers will be prohibited from inquiring about the salary history of a job candidate or relying on salary history in determining the wages to offer a prospective employee. More information regarding this slate of pay equity legislation can be found here.

As of May 10, 2020, New York City employers will be prohibited from conducting pre-employment drug testing for THC, the active ingredient in marijuana. The law does not apply to certain safety-sensitive positions. Additional information can be found here.

New York State revised its election law to provide workers expanded time off to vote. As of April 1, 2019, workers in New York can take up to three hours of paid time off to vote, regardless of whether the employee’s work schedule allows them sufficient time to vote before or after their shift.

The New York Labor Law was amended to codify case law interpreting its anti-retaliation provisions to prohibit an employer from threatening to contact immigration authorities about an employee or an employee’s family member. Under this law, employers cannot threaten immigrant workers with potential deportation in retaliation for the employee standing up for their rights under the state’s labor laws. This provision took effect October 25, 2019.

Westchester County passed the Earned Sick Leave Law, which provides Westchester County employees with up to 40 hours of paid sick leave per year, as of March 30, 2019. On the heels of this law, the county legislature passed the Safe Time Leave for Victims of Domestic Violence and Trafficking Law, which took effect October 30, 2019. Under the Safe Time Law, employees who work in Westchester County who are victims of domestic violence or human trafficking are entitled to up 40 hours of paid safe leave per year to (a) attend or testify in criminal or civil court proceedings related to domestic violence or human trafficking, or (b) move to a safe location. This leave is in addition to the sick leave provided by the Earned Sick Leave Law. Additional information can be found here.

Given the timing, you should comprehensively review your employment policies and practices to ensure compliances with ever-changing state and local employment laws. For those laws that have not yet taken effect, you should take proactive steps to ensure you will be ready to comply when the time comes.