The Venezuelan Revenue Service Adjusted the Tax Unit to 1,500 Sovereign Bolivars, an increase of 2.900%

The Tax Unit ("TU") is a referential value created by the Organic Tax Code in 1994 to update tax bases, fees, fines and similar tax concepts according to the annual inflation. The National Integrated Service of Customs and Tax Administration (the "Revenue Service"), upon approval of the Permanent Commission of Finance of the National Legislative Assembly, must adjust the TU based on the variation of the National Consumer Price Index published by the Central Bank of Venezuela for the prior year.

In January 2019, the Revenue Service adjusted the value of the TU from 50 Sovereign Bolivars ("VES") to VES 1.500, although it published the Administrative Guidelines in the Official Gazette on March 13.[1]  Like recent cases, the Revenue Service did not obtain the National Legislative Assembly's approval. In cases of taxes determined in annual periods, such as income tax, the TU value will be the one in force for at least 183 consecutive days during the period.[2]  Therefore, the TU for fiscal year 2019 will be VES 50.  For taxes determined other than annually, such as VAT, the TU will be the one in force at the beginning of the period.

The TU adjustment will only apply for determining national (federal) taxes administered and collected by the Revenue Services and the fines imposed by such office. The adjustment of the TU increased in 2,900% other concepts, such as the tax base of taxes and fees.[3]  The most important are: 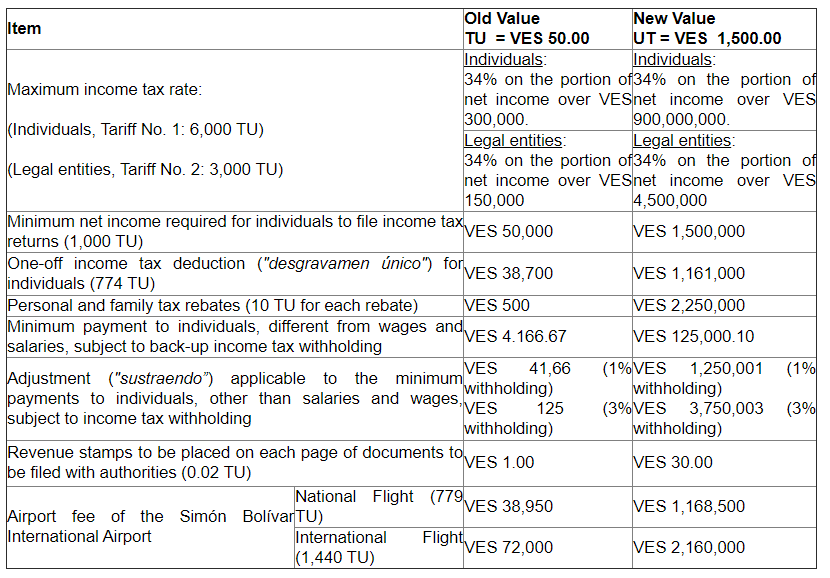