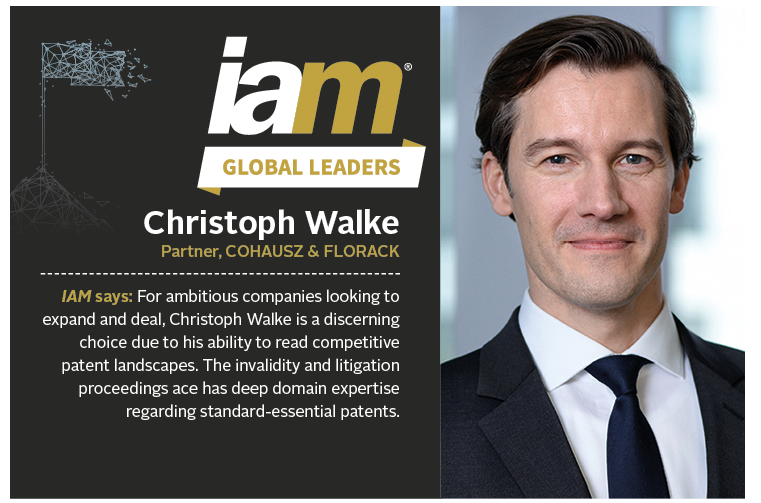 You have worked on many cross-jurisdictional patent cases in Europe. What is the key to doing this successfully?

In my view, the key factors are strategy and coordination. For plaintiffs, diligent pre-litigation patent analysis should be carried out to reveal the strengths and weaknesses of a patent from both an infringement and a validity perspective. Among the European countries in which the patent is in force and which have an economic impact on the defendant, a strategic selection can be made that considers the respective jurisdictional specifics, including:

Once a selection has been made, the different legal teams must coordinate. This can involve weekly calls between well-defined, patent-specific communication groups to ensure that everyone is kept up to date and that any writs submitted by the team are consistent.

How would you characterise the current state of play with regard to the enforceability of SEPs in Germany?

Germany can without a doubt claim to be the number one jurisdiction for obtaining injunctive relief, and this also holds for SEPs. Following the FRAND obligations set out by the European Court of Justice in Huawei v ZTE, plaintiffs can rest assured that they will be able to enforce their SEPs in Germany. Therefore, SEP licensors must show that all licensees have been given the same licensing conditions, unless there are good reasons for deviation. Despite the fact that the automatic industry has recently raised complaints about automatic injunctions in the context of SEPs, I do not expect that the German legal framework will be significantly affected in this respect.

What is the key to success in invalidity proceedings in Germany?

In which technologies are you seeing the most growth in patent interest currently?

We are seeing increased patenting efforts both in the general market and among our clients in the fields of pharma, biotech, digitalisation, AI, machine learning and automotive (particularly concerning self-driving vehicles). Applicants are showing an increasing willingness to experiment with subject matter relating to patentability, particularly with business-method-related inventions. This trend may be fostered by the somewhat applicant-friendlier treatment of such applications at the USPTO and in China. Despite the introduction of the notional business person doctrine in Decision T1463/11 helping to differentiate between technical and non-technical features in a claim, the situation at the EPO is still challenging.

If you were to make one prediction about how patent practice will develop in Germany over the coming years, what would it be?

I expect that Germany will further strengthen its role as one of the most attractive countries for patent litigation, since our infringement proceedings are fast, predictable and cost-efficient and we have well-educated and highly experienced attorneys to optimally conduct these proceedings even without the use of experts.

Christoph Walke is a patent attorney and partner at COHAUSZ & FLORACK. He specialises in information and communications technology, audio, video and data processing, software and cryptography. He has particular expertise in infringement and invalidity proceedings and global-scale patent prosecution, primarily concerning technically complex and standard-related inventions. Further, Dr Walke has extensive experience supporting companies in their expansion of existing business fields and acquisition of new business units through freedom-to-operate searches and due-diligence evaluations.