Here is a phrase you will no doubt hear tomorrow night as election results trickle in: It all comes down to turnout. Like most political bromides, statements like this are thrown around by cable news pundits without much understanding of what, exactly, the phrase means. But the turnout cliché actually does ring true … especially in a midterm election, when about half of the electorate is not motivated enough to vote. Turnout – whether strong or weak – determines if waves form or dissipate. Waves form when one party’s base is very motivated and the other party’s base isn’t. Is that what we see in the 2018 early voting turnout? Will Election Day send this midterm out with a bang or a whimper? We will examine these questions in this final analysis of North Carolina early voting.

The final count for North Carolina early voting, including in-person one-stop votes and absentee mail ballots returned so far, is 2,040,317. That is 29 percent of all registered voters in the state – a huge spike in early voting turnout from previous midterm elections. Compared to 2014, early voting turnout is up an astounding 174 percent. Final overall turnout in 2014 was 44.4 percent. Therefore, to match the previous midterm’s turnout, another 1.1 million North Carolinians would need to vote on Election Day. To put that number in perspective, nearly 1.8 million North Carolinians voted on Election Day in 2014. If that many voters cast Election Day ballots this year, turnout would be 54 percent – extremely high for a midterm election, not to mention a “Blue Moon Election” without a high-profile statewide race. Recent Election Day turnout – regardless of midterm or presidential years – is usually in the range of 1.5 to 1.7 million. That would equate to 50 to 53 percent turnout. 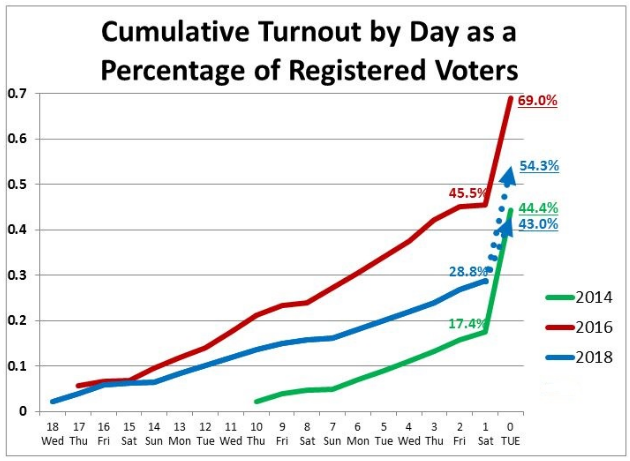 As you can see from the chart below, 2018 early voting shares finished about where 2016 finished. Compared to that year, Republicans are down two points, and unaffiliated voters and Democrats are up a point.

Looking at these numbers, there are reasons for each side to take encouragement. Democrats can view North Carolina early voting numbers positively because (1) Republican vote share is down, (2) unaffiliated vote share is up (and polling suggests unaffiliated voters are breaking more for Democrats than in previous elections), and (3) it is hard to imagine heavy Election Day turnout with more than 2 million votes already in from early voting.

On the other hand, Republicans can be encouraged because (1) 2018 does not appear to be a wave because the Democratic and Republican vote shares are consistent with 2016 – a good year for Republicans – and (2) Election Day turnout is consistently in the 1.5 to 1.7 million range in North Carolina. With turnout that high, it could not possibly be from only one side’s base. (Remember, waves happen when one base shows up and the other doesn’t.)

Now you know what to watch for on Election Night. And when someone says, “It’s all about turnout,” you can respond, “Yes! But can you explain it?!”