Following its evaluation (also referred to as ‘REFIT’ review) last year of the Motor Insurance Directive, the European Commission has, on 24 May, recommended important changes to the Directive in the five key areas summarised below. 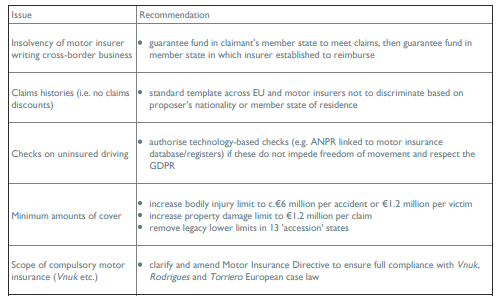 In effect, this particular recommendation will require compulsory, Directive-compliant, road traffic insurance for any motor vehicle, regardless of its characteristics (i.e. not just vehicles designed for use on roads), which is used as a means of transport and without any distinction as the place of its use - thus off-road use comes within the scope of the Directive. The case law and the recommendation mean that the words “road or other public place” in the insurance provisions of the Road Traffic Act 1998 are no longer compliant with the Directive - a point already in fact conceded by the UK Government in the 2017 judicial review of the Act by the charity RoadPeace.The first four of these are not likely to be controversial, but the latter may be a good deal more problematic to implement and enforce.

Unless there are widespread derogations from the Directive's regime (as now proposed by the Commission), this particular element of the new recommendations will very probably bring a wide range of specialist and dual use agricultural, construction and indeed motor sports vehicles fully within the scope of compulsory motor insurance across the EU. It is this approach which the Department for Transport had called the “comprehensive option” in its 2016/17 consultation among UK stakeholders, responses to which showed that “around 94% of those who responded to the relevant question stating that the judgment [i.e.the Vnuk case] as it currently stands (the ‘comprehensive option’) would be worse than the current position on motor insurance in the UK.” A further concern is the adverse effect this “comprehensive option” may have on the enforcement of motor insurance and on fraud risks (in particular arising from ‘untraced’ cases).

On scope, therefore, there is now significant divergence between what the Commission has brought forward (the Commission's press release and Q&A memo can be viewed here) and what the overwhelming majority of UK stakeholders would ideally have sought. The wider political dimension is that the UK will have to abide by any new EU laws - such as this – as long as it remains a member of the EU, i.e. up to March next year and possibly until the end of the implementation or transition period some time after that.

It is impossible to set out with confidence the probable sequencing of these proposed reforms to the MID with Brexit next March and the UK’s implementation period following that which, at the moment, looks likely to run until December 2020.

The first phase of activity will require the Commission and the Parliament formally having to agree the detail of the proposed amendments jointly. That could take quite a few months - possibly rather longer. A short second phase would see the agreed text published in the Official Journal of the EU, with its entry into force (as set out in the Commission’s proposal) 20 days afterwards. The third and final phase would be the period of 12 months which the proposal allows for Member States to amend their own national legislation.

Given these phases, it is certainly foreseeable that the date from which Member States have to comply might fall within the UK’s post-Brexit implementation period. Just what that will mean for the Road Traffic Act 1988 would thus look likely to depend not only on the broad overall political agreement as to rights and obligations arising during the implementation period but also on the much narrower and very practical question of whether UK motor insurance law should (given the weight of commercial and private traffic involved) in any event remain entirely congruent with the EU paradigm? The final twist is that Ministerial responsibility for implementing this – should we either chose or be obliged to do so – would fall to committed Brexiteer Chris Grayling as Secretary of State for Transport.

Having anticipated the Commission’s proposals emerging on time, we have arranged an event to discuss the future direction of the Motor Insurance Directive at our Fenchurch Street office on Friday 8 June 2018. Places at this briefing are limited, therefore please register your interest promptly here should you wish to attend.