As reported in our last post on this case, on December 18, 2020, the Ninth Circuit held that “Oh, the Places You’ll Boldly Go!” was not fair use, reversing U.S. District Judge Janis Sammartino’s decision holding that it was. Critically, the Ninth Circuit’s December decision was on defendant ComicMix’s motion for summary judgment. Thus, the appellate court was only telling the district court that it should not have knocked out Dr. Seuss’s claim on fair use grounds at the summary judgment stage. The Ninth Circuit did not hold that Boldly! infringed Dr. Seuss’s copyright as a matter of law.

In an August 9, 2021 decision, the court denied Dr. Seuss’s motion. The court first noted that “it is somewhat rare for the plaintiff copyright holder affirmatively to move for summary judgment of infringement and for such a motion to be granted.” Historically, courts have only done so in in cases involving “overwhelming similarity.”

The court then applied the Ninth Circuit’s 2-part test for substantial similarity. As to the “objective extrinsic test,” which compares the “overlap of concrete elements,” the court acknowledged that “portions of the Ninth Circuit’s opinion make clear that, extrinsically, Boldly! overlaps concrete elements in the Copyrighted Works, particularly in its exacting replication of iconic illustrations from each of the Copyrighted Works.” The opinion incorporated several side-by-side comparisons demonstrating the significant overlap between the works.

The court proceeded to the “subjective intrinsic test,” which examines the “total concept & feel” of the two works. In a two-sentence analysis, the court determined that, while the works have a significant amount of overlap of concrete, protectable elements, Boldly “is not so similar to the protected works that no triable issue exists with respect to whether the total concept and feel of the works are substantially similar. Therefore, the issue of intrinsic similarity must be left for the jury.”

Given Judge Sammartino’s initial ruling that Boldy! was fair use as a matter of law, it’s not surprising that she wasn’t willing to hand Dr. Seuss a victory “on the papers.” Though the district court is bound by the Ninth Circuit’s ruling on fair use, she’s going to make a jury—not her—decide whether the work is infringing. 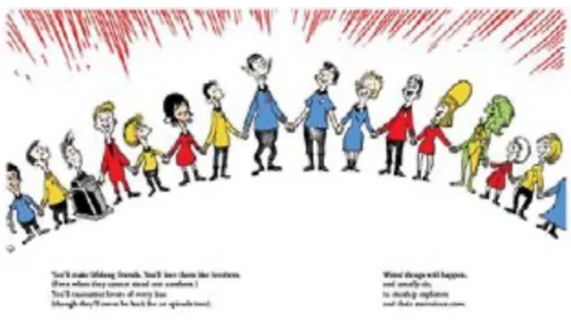