The UK Government has released a policy statement giving details of its proposed ‘points-based’ immigration system.

The Government has announced it will deliver a points-based immigration system, both for sponsored and unsponsored work. At least initially, the proposed system will modify existing arrangements rather than being a radical overhaul.

The policy statement, published on 19 February, has been released ahead of a more detailed white paper expected in March.

The Government has recognised that a complete transformation of the border and immigration system will be a major undertaking, so we can expect the changes from 1 January 2021 to be followed by a ‘wider multi-year programme of change’.

The only unheralded proposal in the policy document is a new proposal to introduce a capped, unsponsored points-based route in addition to the Global Talent route. This will be rolled-out later than the beginning of 2021, and the Government intends to engage with stakeholders over the next year regarding what the route will look like. The implication is that it would be similar to the old Highly Skilled Migrant Program/Tier 1 General.

In a move that will no doubt frustrate civil servants at the Home Office, points criteria will be added to the Global Talent route, which has just replaced Tier 1 Exceptional Talent and now sits outside the points-based system. This could bring welcome objectivity and predictability to the route however.

The policy statement is completely silent on what reforms are planned to sponsorship arrangements, noting only that improvements will come after 1 January 2021. Employers will need to review how many EEA/Swiss skilled workers their business is likely to recruit from 2021. Employers who have not needed a sponsor licence in the past should consider applying for one soon. Existing sponsors should consider increasing their CoS allocations and applying for additional licence tiers if necessary.

In terms of reforms to what is currently Tier 2, the Government has accepted all of the MAC’s recommendations below:

The Government has chosen however to depart from the MAC’s recommendations by proposing that additional points elements are included in the skilled worker route, rather than moving away from applying points-related criteria to it.

The existing points test will be revised so that a minimum of 70 points is required as follows: 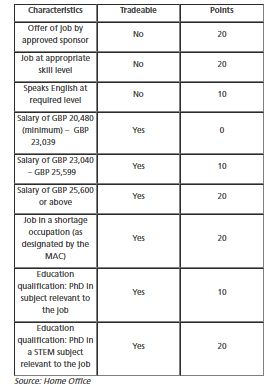 Despite announcing that lower skills will be eligible for sponsorship, the new points test will mean that some new entrants and public sector workers earning less than GBP 25,600 will be ineligible to qualify unless they are also able to gain at least 20 tradeable points. That could be done if they are eligible for 20 points by having a PhD in a STEM subject that is relevant to the job offer, or the job offer is in a shortage occupation. Alternatively they could score ten points by earning at least GBP 23,040 and an additional ten points through having a PhD relevant to the job on offer. Given the MAC’s recommendation that Tier 2 be opened up to assist with the medium-skilled labour shortages that turning off free movement from the EEA will cause, this points structure appears to scupper this intended aim. The Government has however stated that further guidance on points tables and other details will be released at a later date, so the table above may not be an accurate representation of what the final arrangements will be.Source: Home Office

The Government’s aim is for overall migration to be reduced following the end of free movement, stating that to staff lower-skilled roles, employers will need to look towards ‘investment in staff retention, productivity and wider investment in technology and innovation’ as well as the pool of workers who apply under the EU Settlement Scheme, youth mobility participants and the dependants of skilled migrants.

An exception has been recognised for the agricultural sector, with the seasonal workers pilot being expanded from 2,000 to 10,000 places.

However, it is very likely that the Home Office will be lobbied by representatives of the sectors hardest hit by this policy, including the hospitality and social care industries. It is also possible that some occupations lower than RQF level 3 may be allowed under the route for sponsored skilled workers on an exceptional basis if severe labour shortages emerge for particular occupations.