The divisions in this country are not just political, they also relate to attitudes toward responsibility. In a survey and study that Persuasion Strategies conducted this past month (July, 2019), we asked respondents about their views of individual versus collective responsibility. In response to a question that offered two choices on how they see the needs of America today, the collectivist view (“Society needs to do more to ensure people’s well-being”) garnered 52 percent of the support, while the individualist view (“People need to take more responsibility for their own well-being”) received 48 percent. That is about as close to an even split as you are going to see in public opinion. The portion of the population emphasizing individual or personal responsibility is about as large as the portion emphasizing collective or shared responsibility.

In a legal case that contrasts personal and collective responsibility, including many to most personal and occupational injury cases, you will have both types of jurors. But you’ll also have an opportunity to encourage a focus in one direction or the other. One practical question for defendants is this: What encourages a focus on personal responsibility? In the same research project, we conducted an experiment to answer that question. The fact pattern related to a railroad-crossing accident, but the findings could easily be important to any case that includes the goal of distributing responsibility so that it is shared by a plaintiff or by another party. We randomly assigned research participants to one of several different conditions, and we varied the specific facts of the scenario to see if we could play up personal responsibility. The good news is that it worked: Small differences in the fact pattern increased the chances that participants would side with the defendant. In this post, I will describe this recent research and discuss four tracks that can lead a listener toward greater individual responsibility: power, knowledge, choice, and protection (or the ability to take precautions).

We recruited 558 respondents to take part in an online survey and experiment. In the experimental portion, the respondents were randomly assigned to hear one of five ‘thin-slice’ descriptions of a train-automobile collision. There was a default version, or one of four alterations to that version.

To emphasize the driver’s power, one version made him “an experienced commercial driver.”

To emphasize that individual’s knowledge, one version explained that, “Mr. Smith knew the area well and had driven through this crossing many times.”

To highlight individual choice, one version included the line that, “He made the choice to proceed despite being uncertain about whether there was a train.”

And finally, to emphasize a lack of reasonable precautions, one version noted that the accident happened “while Mr. Smith was on a cellular telephone call.”

Overall, we found that respondents were divided in placing greater responsibility on the driver for ignoring the train, or on the railroad for not having barriers or lights. Some common expectations for pro-defense jurors were bourn out. Pro-defense individuals were more likely to be Republican, to think there are too many lawsuits, to feel that people should take more personal responsibility, and to say that they personally would be unlikely to sue if injured.

Looking at the specific scenarios, the manipulations did generally work, and showed that a small difference in the description can influence the amount of personal responsibility that people see.

In the default version that did not include any of the elements aimed at increasing driver responsibility, the plaintiff won with 45 percent over the defendant’s 34 percent. 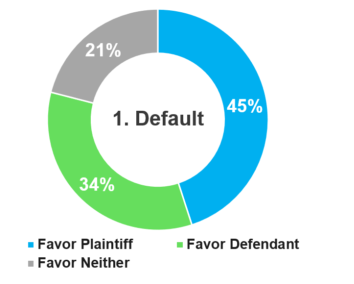 In the version emphasizing the driver’s power, by making him an experienced commercial driver, however, the winning party shifted to the defense, with that simple phrase adding 10 percent to the defense’s support rate. 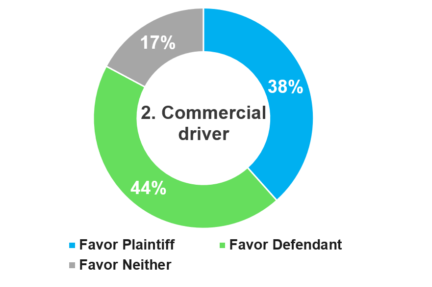 The version that enhanced the driver’s knowledge, by noting that he knew the area well and had driven through the crossing many times, added to the defense win even more, adding 12 points in support over and above the default description. 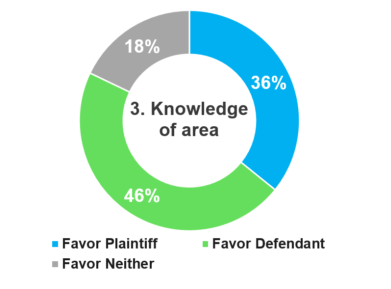 The version emphasizing the driver’s choice was not different from the default version, and we chalk that up to a failure in the manipulation. The language we added emphasized the word “choice” but did not otherwise change the facts. I believe that if we had introduced a choice that was not present in the baseline version, we would have seen a more significant result, and the next comparison seems to bear that out.

The biggest winner for the defense was the version that played down the driver’s precautions by placing him on a cell-phone call. In that version, around two-and-a-half times as many respondents favored the favored the defense over the plaintiff, a 29 point improvement over the baseline. 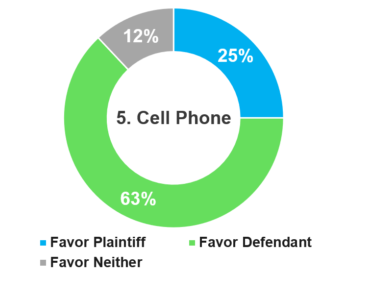 This project demonstrates the potential to enhance juror perception of individual responsibility by playing up specific factors. In an actual case, your success in distributing responsibility to other parties probably depends on you first embracing your own responsibility. They don’t want to see someone who ducks that responsibility. But if you accept responsibility for what you can control, they will be more willing to travel the tracks toward shared responsibility.