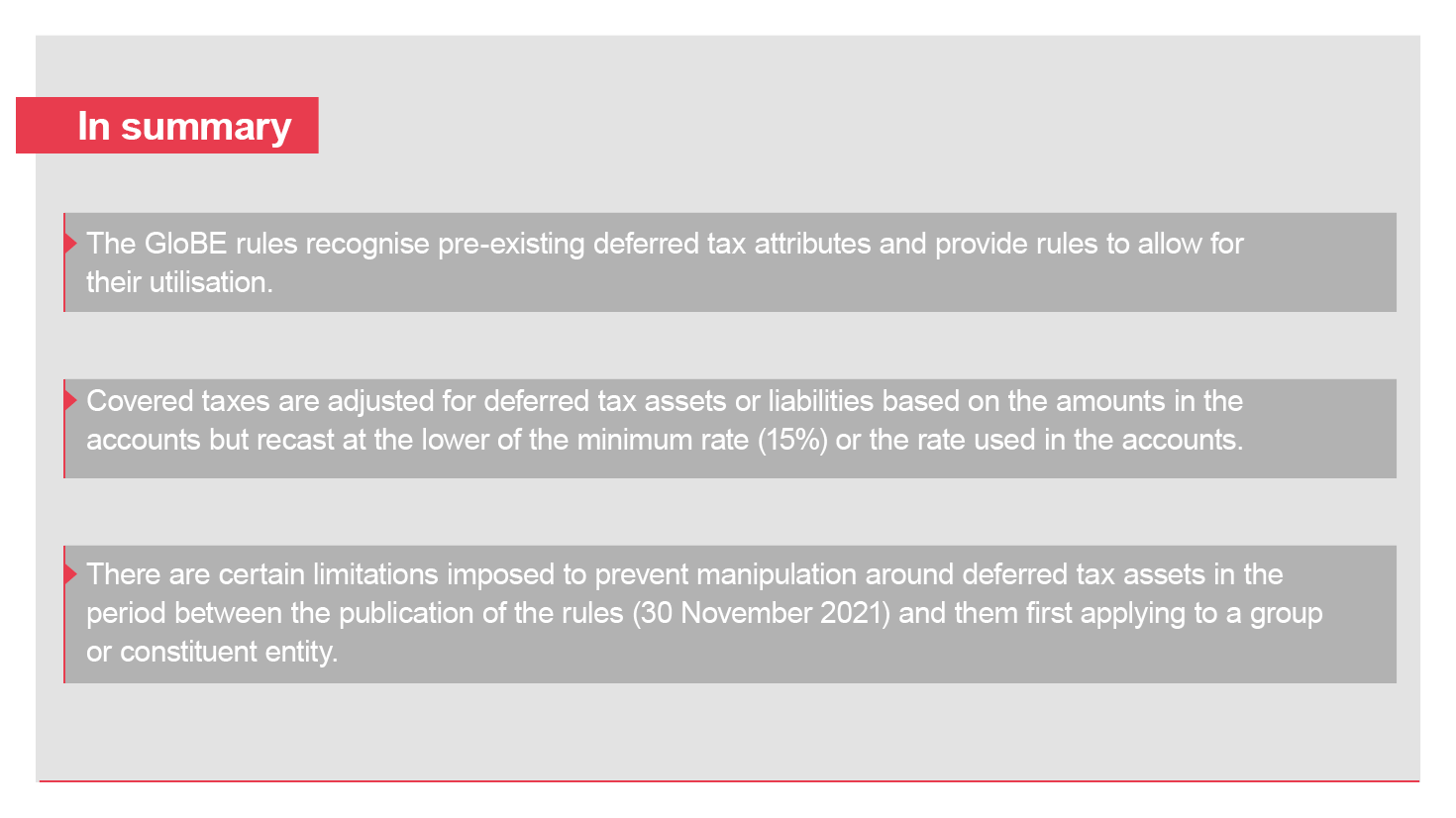 The GloBE rules acknowledge that not all groups or Constituent Entities will be subject to the new GloBE tax system on day one. Some groups will grow in size and fall within scope or a Constituent Entity may be brought within the rules if acquired by a group already subject to them. Tax events and the time that they are recognised in a group’s financial statements may straddle the period before and after the point at which the group comes into scope. The transition rules in Chapter 9 inform how groups should manage this process.

How do the general rules deal with timing differences?

It is worth recapping how the general GloBE rules deal with timing differences. As the ETR calculation is heavily accounting based, differences will inevitably arise between local tax and the GloBE rules. Capital allowances, losses, and foreign tax credits are obvious examples where there might be a timing difference between what’s in the accounts and what’s payable locally. Without rules to correct for these tax attributes it is easy to see how a GloBE tax charge might arise where no tax is paid locally in a particular period of account (for example because the taxable profits are reduced by brought forward losses) despite the local jurisdiction being a high tax jurisdiction.

In very broad terms, the GloBE rules deal with this by making an adjustment to covered taxes (the numerator of the ETR fraction) to address the differences that might arise between the book and tax figures. The starting point is the deferred tax amount taken from the financial statements recast at the lower of the rate the items are recorded in the accounts or the minimum rate of 15% (unless it is a GLoBE a deferred tax asset recorded at a rate lower than the minimum rate in which case it can be recast at the minimum rate of 15%).This amount is added to or subtracted from the covered taxes figure depending on whether the amount is a deferred tax asset (negative expense) or liability (expense).

What happens on transition into the rules?

The GloBE rules recognise that deferred tax attributes may have been generated in the years before the group or Constituent Entity becomes subject to the rules for the first time but then unravel afterwards. For example, losses that have arisen in a period before the entity became subject to the Globe rules which are available to set against future profits (and therefore reduce local tax payable) when within the GloBE rules will be commonplace. Without rules to recognise the historic deferred tax asset it could result in an unfair GloBE tax charge.

To alleviate the problem, the GloBE rules allow historic deferred tax attributes to be used in the ETR calculation. The rules largely follow the general rules described above however they try to absolve the group from undertaking complex calculations as though the entity had been subject to the GloBE rules when they arose. Instead, in the first year of entering the rules (the “transition year”) the deferred tax attributes in the financial statements are brought into account at the lower of the minimum rate (15%) or the rate used in the financial statements. The exception to this rule is in relation to losses where a deferred tax asset has been recorded at a lower rate. These can be taken into account at the higher rate of 15% if it can be demonstrated that the deferred tax asset is attributable to a loss that would have been recognised under the GloBE rules had the group been subject to them when it arose.

The transition rules are disregarded if the GloBE loss election has been made. The election is set out in Article 4.5.1 and is designed as a simplification for jurisdictions that do not impose corporation tax although it can be used in any jurisdiction. As the election simplifies the general rules by only tracking the effect of losses rather than the full range of timing differences it makes sense that the transition rules are similarly restrained.

Anti-avoidance rules are generally very sparse in the GloBE rules, however the transition rules do feature certain limitations to prevent groups manipulating outcomes in the period between the rules being published (30 November 2021) and when the rules apply to a constituent entity.

The first limitation relates to permanent differences arising before the rules apply but which relate to items not included in the calculation of the GloBE Income or Loss – the example in the commentary borrows the UK’s super-deduction which generates an additional amount of tax depreciation over and above the cost of the asset. Where this establishes a deferred tax asset because a domestic tax loss is created, the rules state the amount that relates to the relief given in excess of the asset’s cost is eliminated for transactions taking place after 30 November 2021. Such losses established prior to 30 November 2021 are, pragmatically, not adjusted for.

Another limitation is imposed on intragroup transfers in the period from 30 November 2021 and the constituent entity’s first year in the rules. The assets must be transferred at their historic carrying value to prevent group’s using the opportunity to step-up the base cost value.

Macfarlanes LLP - Rhiannon Kinghall Were and Ashley Greenbank
﻿
Back Forward