Reflecting on 2018, TI continues to score 180 countries on a scale from zero to 100 to reflect the level of corruption where 100 reflects the very clean and zero the highly corrupt.

Denmark usurps last year's cleanest country (New Zealand) to top the rankings. Singapore rises to joint-third to meet perennials Finland, Sweden, and Switzerland. At the foot of the table languishes Somalia, and representing Asia-Pacific, Afghanistan and North Korea fare only a little better.

Focusing on Southeast Asia, outside Singapore, the results make for familiar reading: 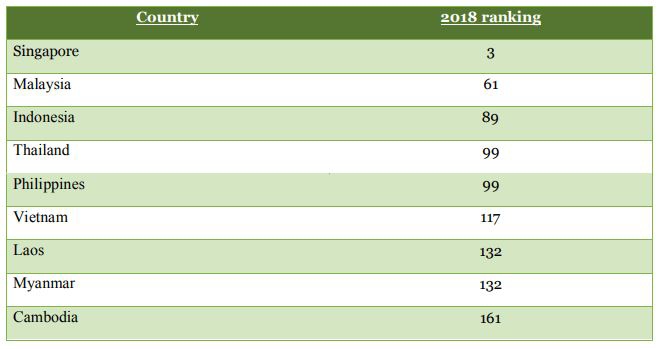 Not one of the following countries organized by ranking: Malaysia, Indonesia, Thailand, the Philippines, Vietnam, Laos, Myanmar, or Cambodia have made significant progress since last year. And reflecting on results since about 2012, only Laos and Myanmar have improved significantly albeit from extremely low starting positions.

With an average score of just 44 for three consecutive years, Asia-Pacific is making little progress in the fight against corruption, TI articulates. Of the Association of Southeast Asian Nations (ASEAN) nations, only Singapore towers, Brunei rises, and then Malaysia peeks above this APAC average. The European Union in contrast scores 66 on average.

Why does TI assess Southeast Asia as making limited progress in its fight against anticorruption?

Singapore has strong anti-corruption institutions; and one cannot deny its regular anticorruption enforcement via the Corrupt Practices Investigation Bureau (CPIB) against individuals. We continue to stargaze as to whether corporate enforcement will follow since the adoption of deferred prosecution agreements exactly a year ago. Vietnam's introduction of a new penal code last year has not convinced TI yet, as question marks surround the nature of enforcement. And we monitor countries like Malaysia where public motivation ushered in new governments that emphasize anti-corruption reform.

What does this data actually mean for you, your company, and your future plans?

The pulse-check analogy is appropriate. This data is more akin to a routine, short-sharp clinic visit than a thorough physical exam.

When we conduct risk assessments of bribery and corruption, jurisdictional risk is clearly a factor for Foreign Corrupt Practices Act (FCPA) and UK Bribery Act analyses. A perceptions index though only partially informs jurisdictional risk.

The CPI draws on 13 surveys from 12 independent institutions over the previous two years to measure public sector corruption and confess this is an "annual snapshot of relative corruption" (emphasis added). This CPI methodology, therefore, does not capture citizens' perceptions or experience of corruption, corruption in specific sectors, tax fraud, money-laundering, or private sector corruption.

With the focus on the public sector administrative and political corruption the CPI does not deliver a verdict on the levels of corruption for specific violations or sectors. In contrast, consider the World Justice Project Rule of Law Index, which measures the rule of law in 113 countries based on eight factors: constraints on government powers, absence of corruption, open government, fundamental rights, order and security, regulatory enforcement, civil justice, and criminal justice (derived from 110,000 household surveys and 3,000 expert surveys).

Ultimately, citizens at the lower end of the CPI may likely share similar concerns in countries that have high rankings. It also likely explains why 1MDB (Malaysia, Singapore); Keppel (Singapore); and now Wirecard (Singapore, albeit exposed around the time of the release of these rankings) are not submerging two of Southeast Asia's high-scoring nations.

The CPI is a piece of the puzzle to understanding jurisdictional risk. It's imperfect, and a tad inexact. Corruption, and commitment to tackling corruption, is too complicated to be measured by one metric. A holistic indicator of measuring corruption does not (yet) exist, but that is no defense for failures in your company's compliance system.