Where States Stand on Lost Wage Assistance One Month Later

A shade over a month ago, the Trump Administration issued a presidential memorandum authorizing lost wages assistance (“LWA”) as a stop-gap measure for a congressional impasse on further supplemental unemployment benefits. We previously wrote an alert discussing the LWA order, its likely benefits and implementation time, and potential legal challenges to the order, followed by another alert discussing guidance issued by the Department of Labor (“DOL”) and the Federal Emergency Management Authority (“FEMA”). This alert builds on our prior updates by discussing the status of LWA grants and the status of negotiations on additional unemployment benefits.

As of September 9, 2020, every state except for South Dakota has applied for a LWA grant. South Dakota previously stated that it does not intend to apply for LWA and, with one day remaining in the time to apply, appears to have stuck to its position.

And, of the 49 states that have applied for LWA grants, 13 have begun disbursing LWA payments. We have identified those states, the amount of available weeks of LWA, when the state began disbursing LWA, and whether the LWA includes an additional $100 payment from state funds in the below summary: 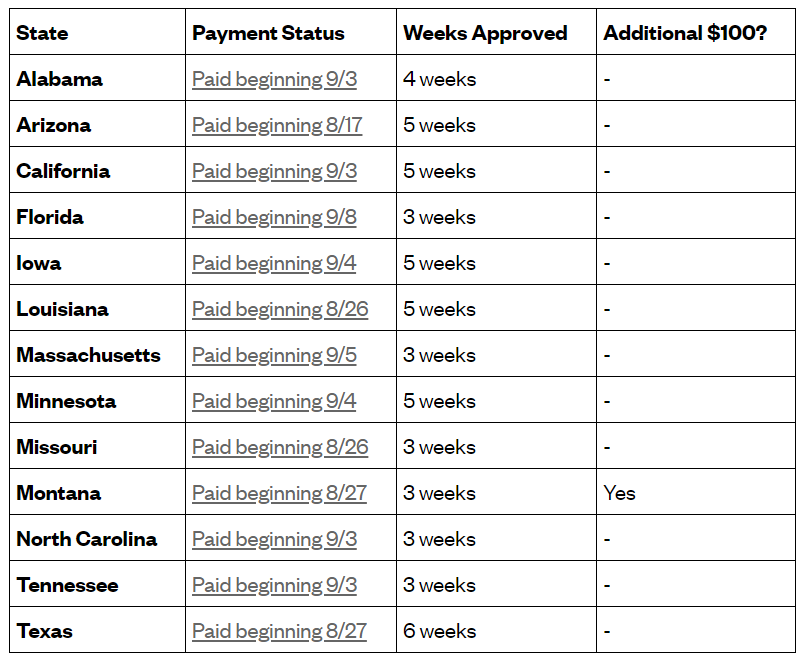 One large unknown is when FEMA will have disbursed all available funding from the Disaster Relief Fund, the funding mechanism for LWA payments. Most sources estimated that LWA funds would be exhausted after about six weeks of LWA payments, and we should have a better idea about how long funding will be available in the next few days, after FEMA releases its monthly report on the status of the Disaster Relief Fund.The remaining states are roughly equally divided between projecting a disbursement date in the next two weeks versus providing no estimate on disbursement. In addition to Montana, Kansas, Kentucky, and West Virginia have opted to pay an additional $100 in state-funded LWA, raising the payment in those states from $300 to $400.

What comes after the LWA program expires remains an open question. The prospects for immediate future unemployment benefits are not high. On Thursday, September 10, the Senate was unable to advance a bill that provided a $300 supplemental unemployment benefit through December. In the aftermath of the bill’s failure, both Republicans and Democrats seemed pessimistic that they would reach a resolution before November’s presidential election.