Much has been written in recent weeks about Lord Snowden’s decision, in a somewhat emotive judgment1, to block the Part VII transfer of the Prudential Assurance Company’s (PAC) annuity book to Rothesay Life. But what does it really mean for the market and for future Part VIIs?

Some have observed that Lord Snowden was persuaded by the objections of the policyholders, notwithstanding the views of the IE, regulators and the parties, and that the decision is a clear signal to the market that the courts are more than willing to exercise their discretion broadly. Others have suggested that the decision can be distinguished as applicable only to transfers of annuity books.

The law applicable to all Part VII Transfers, with which Lord Snowden agreed and which has not changed. 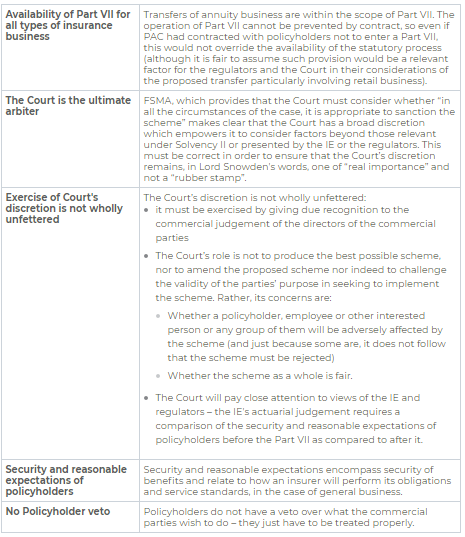 However, whilst some parts of the decision clearly focused on the particular nature of annuity policies, the principles are capable of a much broader application, particularly to long tail business and so to the run off sector. It would be foolish to conclude at this stage that Lord Snowden’s analysis will not be taken into account by the courts in other types of Part VII in the future.

Of course, we must not overlook the position of the regulators and the Independent Expert (IE). Regardless of the approach adopted by future judges, the PRA, FCA and IEs must inevitably pay careful consideration to Lord Snowden’s position, the particular factors he considered relevant and to any implicit criticism of the approach of the regulators and IEs to Part VII transfers. Indeed, it is already apparent that the regulators’ approach is shifting in response to the judgment.However, whilst some parts of the decision clearly focused on the particular nature of annuity policies, the principles are capable of a much broader application, particularly to long tail business and so to the run off sector. It would be foolish to conclude at this stage that Lord Snowden’s analysis will not be taken into account by the courts in other types of Part VII in the future.

However, whilst agreeing with the general principles, Lord Snowden also added some additional factors to be taken into account when making his decision. Therefore the following questions arise:

Lord Snowden appears to have been persuaded by the submissions of the policyholders and their assumptions about the policies they were buying and did not fully explain how these applied alongside the agreed general principles. It is not clearly explained why the policyholders’ position was so significant that the Scheme as a whole was not fair, and in terms of whether it adversely affected policyholders, it appears that the only substantial relevant factor considered was the mismatch in potential parental support. The particular “relevant factors” considered by Lord Snowden were:

The nature of annuity policies

Unlike many general insurance policyholders who purchase annual short tail cover, an annuitant is locked in to its contract to receive payments over many years. Therefore, the reputation and financial standing of the insurer are arguably of particular concern to an annuitant. Lord Snowden considered that this represented a “material difference” between the two types of policies. Yet he also acknowledges that all policyholders are entitled to rely on the fact that their insurer complies with the regulatory capital framework and so will be able to pay claims. The Solvency II Framework is there to ensure a robust financial positon is maintained by all insurers, whether of general business or annuity business. It is worth noting in this context that even the most solid of reputations can be tarnished, and that Prudential’s reputation has suffered in recent weeks as the FCA has levied a fine of £23,875,000 for failures relating to the sale of non-advised annuities – failures described by Mark Steward, FCA Executive Director of Enforcement and Market Oversight as “very serious breaches that caused harm to those customers” 2.

On the one hand, drawing a distinction between annuity books and general business helps to narrow the potential impact of this judgment. However, if the courts follow this view and continue to apply significant weight to the nature of annuity business, it inevitably places a high hurdle on any firms seeking to transfer long term business. Furthermore, as a matter of principle, it cannot be said that general insurance policyholders do not take into account the financial standing and reputation of their insurer, not least where their policies also have a long tail either in terms of potential claims or long term payments, such as EL and PPO claims.

Whilst Snowden says it wouldn’t assist to ask whether policyholders have a “reasonable expectation” that their insurer would not seek to transfer their policy, his judgment steps into new territory. Lord Snowden felt that there was considerable force in the policyholders’ submission that they had a “reasonable expectation” that their policy remain with PAC because:

These additional considerations as to policyholders’ “expectations” are open to challenge. As Lord Snowden notes, the average policyholder would not be expected to know of the availability of the Part VII process. This argument applies equally to every policyholder across all types of policy; annuitants are in no better or worse position than anyone else. The fact that they hold such an assumption may be reasonable but it doesn’t follow that this is then a factor to be given such considerable weight by the Court in its consideration of a Part VII transfer, where that process is designed to achieve a transfer without the consent of the policyholders.

Current SCR metrics and availability of parental or group support

Notwithstanding a robust European wide regulatory framework, which focuses strongly on ensuring sufficient capital at insurer level to support its business to finality, Lord Snowden in effect determined that the actuarial and regulatory assessments on SCR metrics (and in line with the provisions Solvency II on portfolio transfers) were insufficient. Again, drawing attention to the long tail nature of the business, he concluded that the risk of a need for capital support over the annuity period was real rather than fanciful Accordingly, it was appropriate to consider the relative positions of the parties, notwithstanding that this was at odds with the IE position.

One view of the position would be that it effectively drives a coach and horses though the Solvency II regime as a robust capital framework. In addition, however, Lord Snowden essentially accepted that Prudential would support PAC come what may, principally on reputational grounds, but not that Rothesay’s shareholders – comprising pre-eminent financial services investors from private equity, sovereign wealth and US life mutual – would do the same. He appears to disregard the fact that Rothesay’s shareholders have equally significant reputational concerns and the same regulators oversee them (as controllers of regulated firms) and any future controllers, focusing instead on “strong likelihood” of ongoing support on the one side as against relative “uncertainty” on the other.

This allowed him to conclude that policyholders did not have “equivalent comfort” that capital support would be forthcoming in Rothesay as it would in PAC. It has never previously been contemplated that “equivalent comfort” as regards group capital support forms part of the matrix when considering a Part VII. It does not reflect the established general principles and it was not the test applied by the IE in this case. If Lord Snowden’s position holds, this is a high bar indeed, particularly for new or smaller acquirers in the market.

Age and reputation of transferor vs transferee

Here, Lord Snowden rejected the previous position, namely that age was not a relevant factor but that financial strength, record and expectations were relevant. This ensured that the courts did not make decisions that effectively barred new entrants or aggregators to the market. This is naturally of particular significance in the life and run off markets. Lord Snowden simply concluded that the age and reputation of PAC was a factor in the policyholders’ decision to purchase their policies and that the Court should “give some weight to their exercise of contractual choice”. Again, we see the concept of policyholder consent creeping in as a relevant factor.

Agreeing that the Court should exercise its discretion, whilst leaving the commercial decisions to the respective boards, Lord Snowden expands the previous position by stating that “the appropriate balance” has to be struck between the interests of policyholders and the commercial parties. This is, of course, what the Part VII process with its layers of protection for policyholders was designed to do. However, he then goes on to say that “it must be for the commercial parties...to satisfy the Court that in all the circumstances of the case, it is appropriate to sanction a change to the contractual status of the policyholders”.

The language in FSMA makes clear it is simply for the Court to determine whether it is appropriate in all the circumstances to approve the transfer. Established caselaw makes clear that the Court, in exercising its discretion, gives due weight to the judgement of the directors of the commercial parties. But here, the language and tone almost suggests a presumption against a Part VII transfer unless the commercial parties can satisfy the Court otherwise. Indeed, the judgment clearly takes into account the commercial objectives of PAC and the fact that those objectives had been met by the LPT, which ultimately does not change the “contractual status” of policyholders. It is not difficult to make the leap to conclude that, in other circumstances, the commercial objective could be achieved by another mechanism like an LPT, without the need for a Part VII.

This approach increases the burden of proof on the commercial parties and shifts the weight in favour of policyholders, in circumstances where the Court has recognised that they have an expectation that, having carefully chosen their insurer, they will continue to be paid their claims by that insurer. Again, this is potentially at odds with the Part VII process, which is there to facilitate transfers without consent and where the Court does not involve itself in the commercial merits of a particular transfer.

In view of the points raised in Lord Snowden’s judgment, we would advise parties considering Part VII transfer as follows:

PAC and Rothesay have announced that they will jointly appeal the ruling on the basis that Lord Snowden’s judgment in the High Court “contains material errors of law”. It is unlikely that this will be considered at the Court of Appeal until spring 2020.

To view all formatting for this article (eg, tables, footnotes), please access the original here.
HFW - Carol-Ann Burton and Rebecca Huggins
Back Forward