Broadcasts and Promotions Related to the 2020 NCAA Basketball Championships

Broadcast stations often conduct promotions tied to these popular tournaments. Although these promotional events can be successful, especially if local teams advance, they can also lead to expensive litigation and damage awards if your station does not respect the NCAA’s intellectual property rights.

Use of NCAA Copyrights and Trademarks

The NCAA diligently protects its copyright and trademark rights associated with the NCAA basketball championships, and exclusively licenses its trademarks, logos, designs, and other protected terminology for substantial fees. Only licensed parties are authorized to use this intellectual property. Activities that create the appearance of a relationship between the NCAA and its tournaments and your station or your advertisers (known as “ambush marketing”) are extremely risky.

Any unlicensed use of NCAA intellectual property for the sale or promotion of any product or service is unlawful, and can expose your station to claims of trademark infringement, unfair competition, false advertising, and/or misappropriation of goodwill, for which you can be held liable for significant monetary damages. Note that the use of a disclaimer, such as “not an official sponsor of the NCAA tournament,” will not provide adequate protection against infringement claims. We strongly recommend that you avoid any use of the NCAA’s intellectual property in any station promotion unless explicitly authorized by the NCAA or its authorized agents.

For example, unless specifically licensed, you may not say or use in print the following in connection with station promotional events:

You may, however, say or use in print:

The copyrights, trademarks, and logos held by the NCAA include the following: 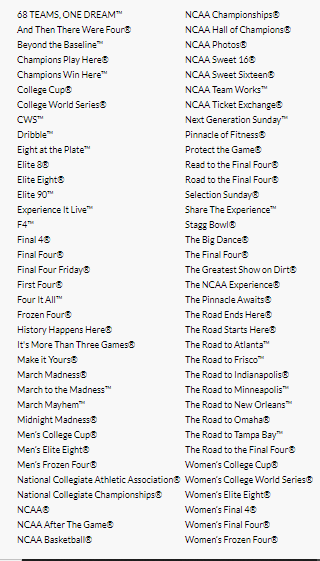 The NCAA and its authorized agents are the only legal sources for the distribution of tournament tickets. Your station should not run any promotion where tickets to a tournament game are awarded, even if your station validly purchased the tickets. The only exception is if your station conducts a promotion with an official sponsor that has written permission from the NCAA to allow tickets to be given away in contests or promotions. In such cases, be sure to confirm with the sponsor that it has the required written authorization, and retain a copy of this authorization for your files.

News Reporting on the Tournaments

The NCAA holds the rights to all live accounts and descriptions of the tournament games and events, and licenses these rights to television and radio stations. Unless your station has obtained appropriate press credentials, do not broadcast reports on an NCAA game from the venue while the game is ongoing. This includes not only live radio and/or television reporting from the venue, but also live web posting and blogging. Once a game has ended, you can report the “news” of the game, such as the winner and score.

Your station must also obtain prior consent from the NCAA or the local rights holder to use recorded highlights of the games, and pre- and post-game events that occurred inside the venue, in station newscasts and on station websites. Although the First Amendment allows the media to report news on athletic events shortly after an event, it does not protect a station that broadcasts footage or sound clips of an event, the rights for which are controlled and licensed by the NCAA or other rights holders.