Moving from Recycling to Waste Prevention

David Attenborough's Blue Planet series has helped to focus minds of the nation on the plastic we buy and use. Every year Europeans generate 25m tonnes of plastic waste, but less than 30% is collected for recycling in the UK. Under the Producer Responsibility Obligations (Packaging Waste) Regulations 2007, manufacturers and importers of packaging, who meet certain thresholds, are obliged to ensure that specific yearly recovery and recycling targets will be met. The obligations also apply to companies filling packaging with their products and placing them on the market anywhere in the EU. Many companies pay a compliance scheme to do this on their behalf. 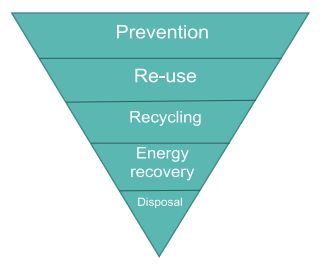 The Waste Hierarchy underpins all waste regulation and it ranks waste management options according to preferential environmental outcome. All the terms in the hierarchy have distinct legal meanings. The aim is that we should all focus on re-use, before the options of recycling or disposal. Recycling can help decrease the consumption of primary resources however this only tackles the symptoms whereas prevention focuses on tackling the causes. Current UK legislation focuses heavily on the recovery and recycling stages of the hierarchy. Clearly, the key to more sustainable product life cycles is to focus on prevention, reducing pressure on recycling and recovery of waste.

In the latest move to tackle the escalating plastic waste problem, the UK is planning to ban the sale of plastic straws and drinks stirrers, as 8.5 billion are thrown away each year. The ban will also cover plastic stemmed cotton buds, this is all subject to consultation later this year. The government has also announced plans for a deposit return scheme to crack down on plastic pollution. The process could be carried out through a network of reverse vending machines, where users insert plastic or glass bottles and the machine returns deposits. These could be run by businesses which are then responsible for making sure returned bottles are recycled effectively.

The UK Plastic Pact supported by WRAP brings together businesses from across the entire plastic chain. The Pact is an industry wide initiative with aims to transform packaging and reduce avoidable plastic waste. Most of the UK's largest supermarkets and retailers have partnered with the scheme.

We have already seen a number of retailers, restaurants and bars make changes to reduce plastic waste, for examples Weatherspoon's and Wagamama have ended the use of plastic straws. Iceland has become the first major retailer to commit to eliminate plastic packaging for all its own-brand products. Iceland have outlined a five-year plan to replace all plastic packaging with trays made of paper and pulp. Starbucks were the first UK coffee chain to trial the latte levy an additional charge on takeaway coffee cups. The charge, suggested earlier this year by the Environmental Audit Committee, is aimed at improving the environment by incentivising people to bring their own cups to coffee shops. However, research by the Paper Cup Alliance claims the levy would likely do more harm than good, with studies having found only 6% of consumers would switch to reusable cups and 8% would be put off buying a drink. Furthermore, a study commissioned by manufactures suggests that the "latte levy" would cost up to 11,000 jobs in the UK. The government had failed to back the scheme, while also rejecting recommendations to ban them completely in 2023. Instead they are relying on voluntary action from retailers.

Reducing plastic waste is also a topical subject in the Netherlands. The Dutch government aims for a circular economy for plastics including a 100% use of renewable plastics by 2050. In the Netherlands there are guidelines for circular design of plastics. The possibility of CEN/ISO-certification of recycled plastic is also being examined, in order to increase the trust in the quality of recycled plastic. The Dutch government also wants to improve the separate collection of plastic waste.

Dutch companies are also engaged in reducing plastic waste, for example via the plastic -free aisle. Supermarket Ekoplaza sells about 700 plastic-free products and plans to introduce this concept in each of its stores. Another noteworthy scheme was introduced by the Dutch entrepreneur Boyan Slat with his initiative "The Ocean Clean Up" to clean up 50% of the plas tic waste in the ocean within 5 years.

It is clear that new regulation will have to focus on the waste hierarchy and in particular, waste prevention, in order to ha ve any real impact. A new Bill on Extended Producer Responsibility in respect of packaging will have its second reading in October. It is expected that tighter regulations will impact not only those companies who manufacture packaging, but anyone involved in the supply/waste chain.