When considering the obviousness of ranges, it is a fundamental principle of U.S. patent law that “where the general conditions of a claim are disclosed in the prior art, it is not inventive to discover the optimum or workable ranges by routine experimentation.” In re Aller, 220 F.2d 454, 456 (CCPA 1955). Consequently, modifications to readily optimized parameters such as temperatures and concentrations disclosed in the prior art will generally not be patentable under Section 103. Aller, 220 F.2d at 456. Furthermore, a presumption of obviousness exists when ranges disclosed in the prior art overlap with the ranges of a claimed invention. See, e.g., E.I. du Pont de Nemours & Company v. Synvina C.V., 904 F.3d 996, 1006 (Fed. Cir. 2018).

In the latest revision of the Manual of Patent Examining Procedure (“MPEP”), released in June 2020 (Ninth Edition, Revision 10), Section 2144 includes a new sub-section describing the framework for rebutting obviousness rejections by showing that a claimed parameter was not recognized as being “result-effective.” Drawing heavily from the Court’s opinion in Synvina, Section 2144.05, para. III.C of the MPEP reads as follows:

C. Showing That the Claimed Parameter Was Not Recognized as “Result-Effective”

On July 2, 2020, the Board issued a decision in Ex parte Morey reversing obviousness rejections based in part on a purported result-effective variable. In this appeal, the applicant persuaded the Board that the claimed parameter at issue was not a recognized result-effective variable, because the cited prior art did not recognize a clear nexus between the claimed parameter and the relevant property.

The claims at issue in Morey relate to strengthened glass articles having a “stress profile” that improves the “frangibility” characteristics of the glass articles. Claim 5 of the relevant application, with emphasis on the relevant limitation, reads as follows:

an inner region under a central tension CT, and

wherein the strengthened glass article is under a compressive stress at the surface CSs,

wherein the strengthened glass article is an alkali aluminosilicate glass article comprising 0 mol% Li2O, and at least 3 mol % Al2O3, and 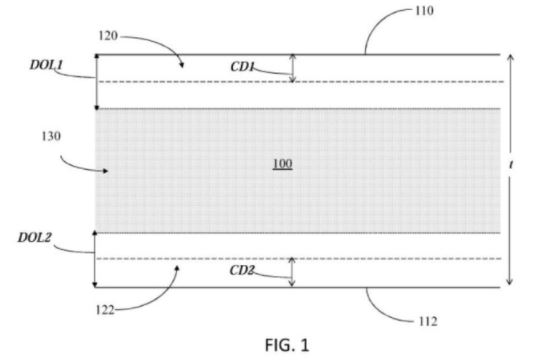 Regarding the “stress profile” limitation in Claim 5, the relevant application discloses that the intermediate critical depths CD1 and CD2 and the compressive stresses at these critical depths are sufficient to increase the survivability of the inventive glass article (100) by enveloping or encasing a flaw introduced by a sharp impact to the first and second surfaces (110, 112).

To account for the required “stress profile” of Claim 5, the Patent Office relied upon the teachings of US 2010/0035038, published by Barefoot et al. (“Barefoot”), which the Examiner acknowledged fails to explicitly recognize the effect of the “stress profile” limitation in Claim 5 on the frangibility of the glass article.

The Examiner argued that the “stress profile” of Claim 5 was implicitly recognized to be a result-effective variable because, based upon the teachings of Barefoot, persons of ordinary skill in the art would understand that optimizing the depth of layer DOL and/or the compressive stress at the surface CSs could lead to strengthened glass articles with improved frangibility. As explained in the Examiner’s Answer:

The Examiner argued that “DOL and CSs, and therefore CSD (which depends on the DOL and CSs) and CT, are optimizable, result-effective variables for obtaining a strengthened glass article with low frangibility achieved by varying parameters known to those of ordinary skill in the art.” Id.

The Board, on the other hand, agreed with the applicant’s argument that there is no teaching or suggestion in the cited art that the CSD-to-CSs relationship (i.e., the “stress profile”) in Claim 5 affects the frangibility of the strengthened glass article. As explained by the Board:

The Appellant’s argument is persuasive of reversible error. Barefoot discloses that the observed differences in behavior between a glass plate which exhibits frangible behavior and a glass plate which exhibits non-frangible behavior can be attributed to a difference in central tension CT. Barefoot ¶ 25. The Examiner finds that “[s]ince CSD depends on DOL and CSs and CSs is related to CT, it follows that CSD, and therefore the relationship of CSD to CSs, is related to frangibility.” Ans. 19. Based on those relationships, the Examiner explains that DOL and CSs, as result-effective variables, “are modified to give the claimed CSD.” Ans. 20. The Examiner, however, has failed to show that optimizing DOL and CSs to provide a strengthened glass article having a desired frangibility as disclosed in Barefoot would necessarily result in the claimed CSD. See Br. 8 (arguing that the Examiner has not established a connection between frangibility and the claimed CSD to CSs relationship). For that reason, the obviousness rejection is not sustained.

Takeaway: When an obviousness rejection is premised upon a claimed parameter being a result-effective variable, the rejection should be scrutinized to determine whether the cited art recognizes a clear nexus between the parameter and the relevant property or result.