The structuring options include an Irish Collective Asset-management Vehicle (ICAV), a Variable Capital Company (VCC), a Unit Trust, an Investment Limited Partnership (ILP) and a Common Contractual Fund (CCF). This series takes a look at each of these options.

What is an ICAV?

The ICAV is the current vehicle of choice for promoters establishing regulated funds in Ireland, having largely replaced the VCC since its introduction in 2015. The ICAV is a corporate vehicle that is not subject to a number of requirements under general Irish and European company law that are more appropriate to trading companies but apply to investment funds established as VCCs. It has a separate legal personality with an instrument of incorporation as its constitutional document. An ICAV must be regulated either as a UCITS fund, a retail investor alternative investment fund (RIAIF) or qualifying investor alternative investment fund (QIAIF), in each case by the Central Bank of Ireland (Central Bank).

How is an ICAV created?

The Central Bank acts as the incorporating, authorising and supervisory body for the ICAV. An ICAV is created upon registration by the Central Bank following the submission of a form AR1 and draft instrument of incorporation. The form AR1 contains information about the ICAV including details of the directors, secretary and registered office.

How is an ICAV structured?

As a corporation, an ICAV is a separate legal entity, managed and controlled by its board of directors. It can enter into contracts in its own name. The ICAV's day to day management and control is carried out by a board of directors, which generally delegates many functions to service providers. The board of the ICAV may appoint a manager (as distinct from an investment manager) but is not obliged to do so. A variety of third party service providers offer this service. Alternatively a promoter may choose to appoint its own manager. 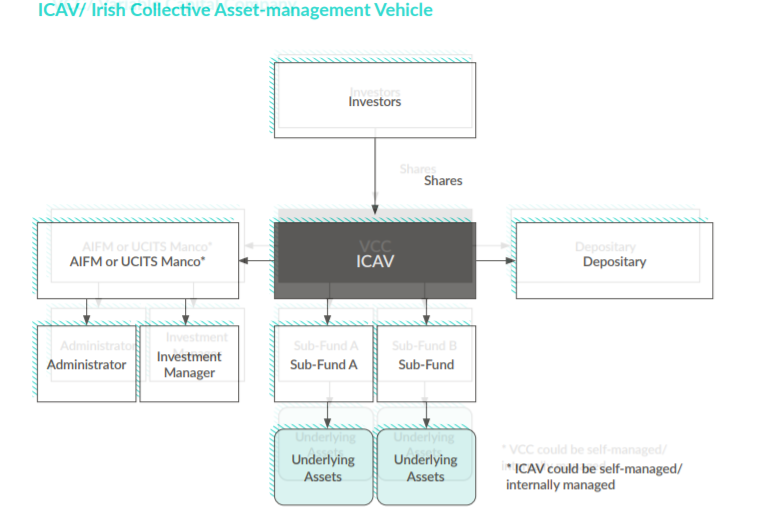 An ICAV may be authorised as a UCITS (in which case it must be open-ended). UCITS are subject to the UCITS regime (which includes the Central Bank of Ireland's UCITS Regulations) and the provisions of the ICAV Act 2015.

An ICAV may be authorised as an Alternative Investment Fund (AIF) in one of two categories:

Both RIAIFs and QIAIFs are subject to the AIFMD regime (which includes the Central Bank of Ireland's AIF Rulebook) and the provisions of the ICAV Act 2015.

ICAVs may be open ended or, if authorised as RIAIFs or QIAIFs, may have limited liquidity or be closed-ended.

What do investors hold?

ICAVs issue shares to investors. The shares do not represent a legal or beneficial interest in the ICAV's assets, those assets being legally held by the Depositary and beneficially by the ICAV itself. Its share capital does not have a par value but is equal to the net asset value of the ICAV at any time.