HBO Objects to the President's "Game of Thrones"-Themed Tweet

In connection with the release of Special Counsel Robert Mueller's report, President Trump Tweeted a "Game of Thrones"-themed image, using what appeared to be the "Game of Thrones" font. It said, "NO COLLUSION. NO OBSTRUCTION. FOR THE HATERS AND THE RADICAL LEFT DEMOCRATS -- GAME OVER." It's not the first time that the President has referenced the show on Twitter.

HBO issued a statement objecting the the President's reference to the show. HBO said, "Though we can understand the enthusiasm for 'Game of Thrones" now that the final season has arrived, we still prefer our intellectual property not be used for political purposes."

Although it does not appear that HBO is planning to take legal action here, advertisers shouldn't assume that this means that all "Game of Thrones"-themed social media posts are fair game. While it may be obvious to the public that HBO is not affiliated with, or sponsoring or endorsing, the President, the analysis could be quite different when a brand is involved -- particularly given the number of brands that are officially partnering with the show. 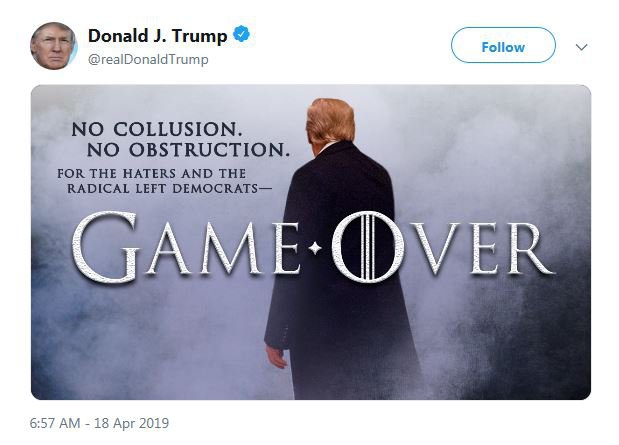