Illinois Increases the Minimum Wage for the First Time Since 2010: What Do Employers Need to Know?

On Feb. 19, 2019, Illinois joined several other states by amending its minimum wage law to gradually increase workers' minimum wage to $15 per hour by 2025. The law, signed by Governor Pritzker, increases the minimum wage on the following schedule: 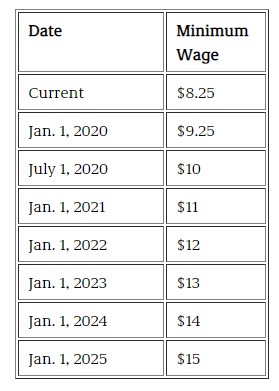 Other states—California, Massachusetts, New Jersey and New York—have enacted laws that mandate a $15 per hour minimum wage within the next few years. The current federal minimum wage is $7.25 per hour. Illinois's recent amendment is the highest minimum wage in the Midwest.

To curtail the rise in costs to some businesses, the amendment provides a tax credit for businesses with 50 or less full-time employees. That credit allows those employers to claim a 25 percent credit against the difference between the compensation paid to employees on the new minimum wage and what was paid to minimum wage employees in the previous year. However, the credit decreases each year by 4 percent—eventually ending completely after 2026 for employers with more than five employees.

Employers in Chicago or Cook County may not feel the direct effect of the amendment for a few years, although all employers would be wise to modify financial forecasts to account for the anticipated increase in wages. Chicago's minimum wage is set to increase from $12 to $13 in July 2019 by virtue of municipal ordinance. Cook County's minimum wage will increase from $11 to $12 this July. Because many municipalities outside of Chicago have opted out of the Cook County minimum wage law, employers in Cook County with questions or concerns about a specific municipality should consult experienced employment counsel. Employers should also audit their pay policies to verify that they are paying the appropriate overtime rates for certain employees affected by these changes to the minimum wage and to ensure that the use of any tip credit is compliant with Illinois and federal law.